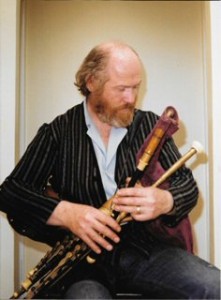 He is a member of two traditional groups : Ceol na gapall, who have brought out a CD and booklet entitled “Breath of Fresh Air” on which he plays the uilleann pipes, and Ailsa, who have brought out two CDs and booklets – “Misty Burn” and “Sam M’Guffin’s Kitchen”, on which he plays the uilleann pipes, scottish small pipes and whistle. In all of these projects Wilbert was the author, illustrator and designer.