Caoimhín Mac Aoidh was born in Philadelphia into a musical family on both of his parents’ sides. He began playing whistle at an early age and later took up the fiddle under the influence of his paternal relation, Vincey McLaughlin of Ballymaguigan, County Derry. Upon hearing John Doherty in his late teens he became an avid follower of Donegal traditional music.

Though right handed, he plays pipes left handed. His early attempt at playing a right handed practice set of pipes in the late 1970s required turning the bag upside down and connecting to the bellows with a garden hose around his back. It was an abject failure. Acquiring pipes, and particularly left handed instruments, at that time was problematic. Years later through the great kindness of Martin McIntyre of Letterkenny, he managed to obtain a marvellous B flat left handed set of Martin’s manufacture.In 2016 he was commissioned to compose a six movement suite for solo uilleann pipes commemorating the life of Eamonn Ceannt. 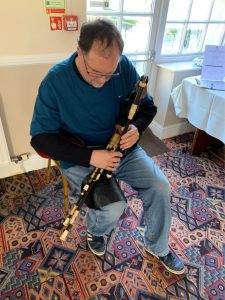 Rick Lines is Co-Chair of Pibyddion Uilleann Cymru, the Uilleann Pipers of Wales. He was elected to the NPU Board in 2019 and appointed Board Secretary in 2021.

Rick started learning the pipes in 1995 in his home city of Toronto under the tutelage of Debbie Quigley before relocating to Ireland, London and finally Wales. He has been a member of NPU since the 1990s and is a regular contributor to An Piobaire. Rick has 30 years professional experience working in charities in Ireland, Canada and the UK, including at chief executive level, and brings to the Board a range of related skills. He currently holds a senior post in Public Health Wales as well being a Professor at Swansea University.

Rick plays several historic sets of pipes from the 18th, 19th and early 20th century. He plays as a duo with Ceri Rhys Matthews (flute/pibau cyrn) and together perform a repertoire of Welsh and Irish music.  Rick is the organiser of Gŵyl Uilleann Glanyfferi (the Ferryside Uilleann Pipes Festival) in West Wales. He is a member of Cor Meibion Llanelli (Llanelli Male Voice Choir) and is learning the pibau cyrn (Welsh bagpipes). Peter Browne was born in Dublin in 1953 and commenced playing traditional music at the age of 6. He learned music from three of the great pipers of modern times; Séamus Ennis, Leo Rowsome and Willie Clancy and in his youth attended many of the major traditional music events of the time with his family and frequently visited Miltown Malbay, Co. Clare, home of Willie Clancy and Lisheen, Gneeveguilla, Co Kerry staying in the home of Denis Murphy the famous Sliabh Luachra fiddle player.

In the early 1970’s he played with the groups Raftery and 1691 – a forerunner of The Bothy Band and later spent two periods playing on both pipes and flute with The Bothy Band. He made two albums of music and song in the 1980’s together with Philip King on the Gael-Linn label – Rince Gréagach and Seacht Nóiméad Déag chun a Seacht.

His work as a session musician included contributing to recordings by Paul Brady, Maura O’ Connell, Mary Black, Mick Hanley, The Chieftains, The Dubliners, Scullion and Cór Chúil Aodha and he has also been part of various ventures in modern experimental music, playing works by Bill Whelan, Michael Holahan, Roger Doyle and Paddy Meegan. He featured as soloist with the National Symphony Orchestra and with the RTÉ Concert Orchestra on their 1998 tour of North America and in the series Music in the Classroom. He was the soloist with the Ulster Orchestra in a performance in the Waterfront Hall in Belfast on St Patrick’s Day 2001 of The Brendan Voyage by Shaun Davey and has played the same work with the National Youth Orchestra of Ireland. He has twice been the winner of the Oireachtas uilleann-piping in 1994 and 1998 and also won the prize for slow-air playing in both those years.

He worked for over 40 years in RTÉ Radio One with a special interest in traditional music and his weekly programme The Rolling Wave enjoyed a large listenership in Ireland and abroad.  He also presented and produced programmes such as Sounds Traditional, Áirneán, Céilí House and in the late 1970s presented The Long Note. Noteworthy broadcast projects included researching, presenting and producing series of documentary programmes on the lives and music of famous traditional players such as Séamus Ennis, Willie Clancy, Pádraig O’ Keeffe, Denis Murphy, Paddy Cronin, Peter Horan, Elizabeth Crotty and the 19th century traditional music collector Canon James Goodman.

Barra has been one of the most prominent and best known lawyers in the Northern Ireland jurisdiction for many years, first as a solicitor and then as a counsel. He became a QC in 2007 and was appointed as the DPP for Northern Ireland in 2011.

Barra has a life-long interest in traditional music, plays the bouzouki and is father to a fiddler and piper. His wife, Brigid O’Neill is a professional musician and singer. 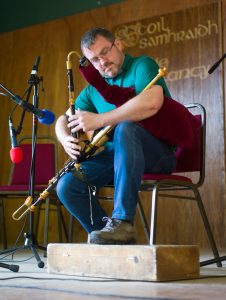 Mikie Smyth began playing the pipes over 30 years ago. His first teachers were Colm De Brun and Andy Conroy in the Pipers Club in Henrietta Street, Dublin. Through the club Mikie had the opportunity and privilege to learn from and play with many of the great pipers who were always so generous with their time and expertise.

Mikie has been invited to teach at most of Ireland’s summer schools including the Scoil Samhraidh Willie Clancy, South Sligo summer school, Joe Mooney summer school, Keadue summer school, Scoil Acla and Scoil Eigse. He has given workshops in the USA, Europe, Japan and New Zealand to mention a few. Mikie has worked with third level students in U.L., T.U.D., U.C.D., U.C.C. and T.C.D.

Mikie has performed both as a soloist and with shows (Riverdance and Ragus etc) in over 30 countries across 5 continents. Mikie has recorded a solo album ‘The Wild Keys’ and has also recorded with Donal Lunny, Maurice Lennon, Sean Keane and ‘The Rubberbandits’ to mention a few.

While not as active on the touring circuit now as he was in the past; Mikie maintains his connections with his fellow musicians and artists through his practice as a Chartered Tax Advisor. He also teaches accounting subjects in Crumlin College of further education in Dublin.

Mikie Currently resides in County Limerick with his wife Aoife, their four children and three sets of Geoff Wooff pipes.

As a previous long-serving Board member, Patricia Logan, from Athlone in Co Westmeath, brings a wealth of experience and knowledge to the governing body of the Association. She worked in the further education sector in Dublin as a teacher and deputy principal for over thirty years before taking early retirement in 2018.

A former student of the pipes in NPU in the 1980s, Logan is married to well-known pipe-maker Donncha Keegan and lives in Leixlip in Co Kildare. Rita Farrell is a London born uilleann piper, flute, and piano player. With family roots firmly in County Leitrim, her involvement with traditional music started at a young age under the guidance of Marian Gill and Damien Mullane before learning the pipes from leading uilleann piper Emmett Gill.

A previous recipient of the NPU Scholarship Scheme for young students of the instrument, Farrell is a graduate in architecture from Queen’s University Belfast where she conducted research into soundscapes in Irish music as part of her Masters programme. She is currently practising as an architect in London.

A regular public performer on the pipes, Farrell features on NPU’s, The Rolling Wave, A New Generation of Pipers CD. She has since become a prominent member of the London music scene and continues to teach from her home in the city.

Pamela Schweblin was born in Buenos Aires, Argentina in 1983 into an artistic family. She is a music teacher. Her interest in Irish traditional music began when she was 16 years old and she got her hands on CDs of Planxty and The Chieftains.

She has undertaken a number of trips to Ireland to study uilleann piping, taking lessons with Cillian O´Briain and Brian McNamara who were her greatest influences. She has also taken some lessons at summer schools and at Na Píobairí Uilleann itself.

She continued studying by herself and, based on the hurdles that she had to overcome in that process, she developed a method of teaching the pipes in the Latin American context.

Meeting Gay McKeon in 2015 gave a further boost to her learning. Gay taught her regulator technique and gave her a lot of advice on how to teach the pipes.  Joe Doyle was also very inspiring for her, being her tutor at the Teacher Training Course at Comhaltas in 2019.

Pamela is also a member of Elamti, a non-profit network of Latin-American musicians who work together in order to promote Irish traditional music throughout the continent. As part of Elamti, she has also played concerts, given workshops and provides online piping and whistle lessons to students from different countries throughout Latin America.