NPU Headquarters – History of the building

Built on land formerly part of the old Cistercian Abbey of St. Mary, suppressed by Henry VIII in 1537, Henrietta Street is Dublin’s first Georgian street, dating from the 1720s and is therefore of great historical and cultural importance. These Georgian houses are remarkable for their wealth of interior decoration, some of which was destroyed or removed when the street declined in the 1820s, but some of which fortunately remains.

In agreeing to take one of the buildings, number 15, on a 99 year lease and at a nominal rent from Dublin City Council, Na Píobairí Uilleann acquired a premises from which to conduct its activities and also committed itself to a role in the preservation of Ireland and Dublin’s architectural heritage. 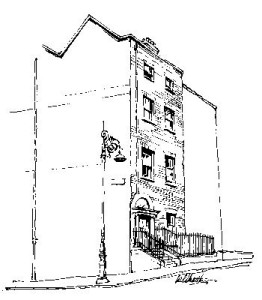 At the heart of our commitment to maintain and promote the playing of the uilleann pipes is our building. It is both a gathering place and also a symbol because it is regarded as the main communications centre for all things associated with the art of uilleann piping. As a gathering place its importance cannot be over-emphasised since it contributes in no small way to the social aspects of the art. It is also the place where all piping functions, publications, teaching, correspondence, archive and museum material are administered

Set dance classes and classes on concert flute, tin whistle, fiddle, concertina and accordion are also held in the building.