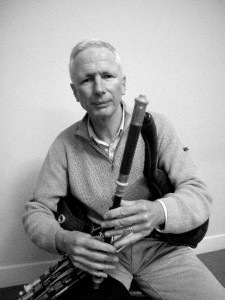 Nollaig Mac Cárthaigh was introduced to traditional music by a neighbour, Des Leech (an uncle of Deirdre Leech) who happened to hear him trying to play the music of Simon and Garfunklel on the tin whistle. Des was setting up a céilí band for teenagers and it was when he joined this band that Nollaig became aware of the pipes for the first time. Des’ son, Paul Leech was attending classes in NPU with Pat Mitchell at the time and when Nollaig expressed an interest in playing pipes, it was there that he was directed. By chance, Deirdre’s grandfather, Dan O’Dowd was the first person Nollaig met in Essex St., where the club was then situated. Dan immediately offered to make a practice set for Nollaig and so began a long and happy association with Dan, his wife Mae, and with NPU.
Nollaig was taught by, among others, Brian Gallahar, Tom Clarke and Seán Donnelly. Due to a shortage of teachers, Nollaig began teaching beginners from an early stage. It is as a teacher that he is probably most well known in the piping world.
As well as teaching in NPU every Tuesday night for almost 40 years, (including the Tuesday that he arrived home from his honeymoon, as he is often reminded by Joyce, his wife) Nollaig teaches at The Willie Clancy Summer School in Clare and at The Tommy Kearney Tionól in Kilkenny every year. He has also taught at numerous Tionóil both in Ireland and abroad: in America, England, Scotland, France, The Netherlands and Germany.
Nollaig’s continued enthusiasm for piping has been sustained not only by his love of traditional music but also by the people he has met and the enduring friendships he has made over the years. From early on Seán and Bernie Potts encouraged and guided him and introduced him to many musicians. Seán’s approach to music and his ideas as to how it should be played were a huge influence on Nollaig’s playing. Mick and Bernie Slevin also gave him great encouragement. In his later years, Andy Conroy often came to Nollaig’s house and many’s the pleasant Sunday evening was spent playing and discussing tunes and having a laugh with Andy.
Over the years, Nollaig has served on the Board of NPU and has been involved in many major projects in the club, including “The Art of Uilleann Piping” and “the Pipers’ Choice” series. Nollaig and Joyce set up the “Ceol sa Chlub” recitals, with a view to giving younger pipers and musicians in general, a non-competitive platform on which to perform for their peers. This initiative is still running successfully.
As well as performing at many functions and gigs, Nollaig plays on a regular basis in the Cobblestone pub in Smithfield.
Nollaig was born and bred in Dublin and has just recently retired as a primary school teacher.
He has three daughters, all of whom share his love of traditional music.
He plays a concert set of pipes made by Quinn and Koehler.