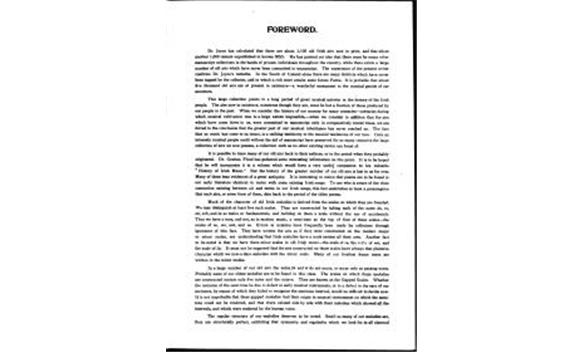 Previous | Next
Roche, Francis - Collection of Irish Airs, Marches and Dance Tunes, Volume 1, Issue 1, Page 5
41 views
Favourite | Share | Feedback
periodical Publisher
Pigott & Co. 1927
periodical Editor
Roche, Francis
periodical Title
Roche, Francis - Collection of Irish Airs, Marches and Dance Tunes
volume Number
1
issue Content
FOREWORD.Dr. Joyce has calculated that there are about 3,100 old Irish airs now in print, and that aboutanother 1,000 remain unpublished in known MSS. He has pointed out also that there must be many othermanuscript collections in the hands of private individuals throughout the country, while there exists a largenumber of old airs which have never been committed to manuscript. The experience of the present writerconfirms Dr. Joyces remarks. In the South of Ireland alone there are many districts which have neverbeen tapped by the collector, and in which a rich store awaits some future Petrie. It is probable that aboutfive thousand old airs are at present in existencea wonderful monument to the musical genii of ourancestors.This large collection points to a long period of great musical activity in the history of the Irishpeople. The airs now in existence, numerous though they are, must be but a fraction of those produced byour people in the past. When we consider the history of our country for many centuries-ceflturies duringwhich musical cultivation was to a large extent impossible,when we consider in addition that the airs.which have come down to us, were committed to manuscript only in comparatively recent times, we areforced to the conclusion that the greater part of our musical inheritance has never reached us. The factthat so much has come to us intact, is a striking testimony to the musical tendencies of our race. Only anintensely musical people could without the aid of manuscript have preserved for so many centuries the largecollection of airs we. now possess, a collection such as no other existing nation can boast of.It is possible to trace many of our old airs back to their authors, or to the period when they probablyoriginated. Dr. Grattan Flood has gathered some interesting information on this point. It is to be hopedthat he will incorporate it in a volume which would form a very useful companion to his valuableHistory of Irish Music. But the history of the greater number of our old airs is lost to us for ever.Many of them bear evidences of a great antiquity. It is interesting to notice that poems are to be found inour early literature identical in metre with some existing Irish songs. To one who is aware of the closeconnection existing between air and metre in our Irish songs, this fact establishes at least a presumptionthat such airs, or some form of them, date back to the period of the olden poems.Much of the character of old Irish melodies is derived from the scales on which they are founded.We may distinguish at least five such scales. They are constructed by taking each of the notes do, re,ml, soh, and la as tonics or fundamentals, and building on them a scale without the use of accidentals.Thus we have a tone, and not, as in modern music, a semi-tone at the top of four of these scalesthescales of re, ml, soh, and a. Errors in notation have frequently been made by collectors throughignorance of this fact. They have written the airs as if they were constructed on the modern majoror minor scales, not understanding that Irish melodies have a scale system all their own. Another factto be noted is that we have there minor scales in old Iris h rnusicthe scala of re, the -&e of ml, andthe scale of la. It must not be supposed that the airs constructed on those scales have always that plaintivecharacter which we now-a-days associate with the minor scale. Many of our liveliest dance tunes arewritten in the minor modes.In a large number of our old airs the notes ft and ti do not occur, or occur only as passing notes.Probably some of our oldest melodies are to be f3und in this class. The scales on which these melodiesare constructed contain only five notes and the octave. They are known as the Gapped Scales. Whetherthe omission of- the semi-tone be due to defect in early musical instruments, or to a defect in the ears of ourancestors, by reason of which they failed to recognise the semitone interval, would be difficult to decide now.It is not improbable that these gapped melodies had their origin in musical instruments on which the semi-tone could not be rendered, and that there existed side by side with them melodies which showed all theintervals, and which were rendered by the human voice.The regular structure of our 4nelodies deserves to be noted. Small as many of our melodies are,they axe structurally perfect, exhibiting that symmetry and regularity which we look for in all classical
issue Number
1
page Number
5
periodical Author
Roche, Francis
issue Publication Date
1982-01-01T00:00:00
allowedRoles
anonymous,guest,friend,member