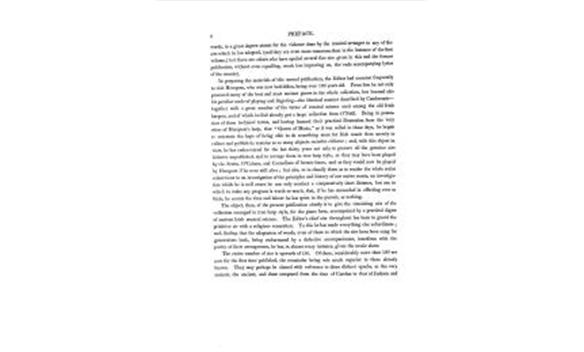 Previous | Next
Bunting - The Ancient Music of Ireland, Volume 1, Issue 1, Page 12
31 views
Favourite | Share | Feedback
periodical Publisher
Hodges & Smith, Dublin, 1840
periodical Editor
Edward Bunting
periodical Title
Bunting - The Ancient Music of Ireland
volume Number
1
issue Content
6 PREFACE.words, in a great degree atones for the violence done by the musical arranger to any of theairs which lie has adopted, (and they are even more numerous than in the instance of the firstvolume,) but there are others who have spoiled several fine airs given in this and the formerpublication without even equalling, much less improving on, the rude accompanying lyricsof the country.In preparing the materials of this second publication, the Editor had occasion frequentlyto visit Hempson, who was now bedridden, being over 100 years old. From him he not onlyprocured many of the best and most ancient pieces in the whole collection, but learned alsohis peculiar mode of playing and fingeringthe identical manner described by Cambrensistogether wi h a great number of the terms of musical science used among the old Irishharpers, and of which lie Had already got a large collection from ONeill. Being in posse-sion of these technical terms, and having learned their practical illustration from the verywires of Hempsons harp, that Queen of Music, as it was called in those days, he beganto entertain the hope of being able to do something more for Irish music than merely tocollect and publish its remains as so many disjecta menthra cithare; and, with this object inview, lie has endeavoured for the last thirty years not only to procure all the genuine airshitherto unpublished, and to arrange them in true harp style, as they may have been playedby the Scotts, OCahans, and Connallons of former times, and as they would now be playedby llempson if he were still alive ; but also, so to classify them as to render the whole seriessubservient to an investigation of the principles and history of our native music, an investiga-tion which lie is well aware he can only conduct a comparatively short distance, but one inwhich to make any progress is worth so much, that, if he has succeeded in effecting ever solittle, he counts the time and labour lie has spent in the pursuit, as nothing.The object, then, of the present publication chiefly is to give the remaining airs of thecollection arranged in true harp style, for the piano forte, accompanied by a practical digestof ancient Irish musical science. The Editors chief aim throughout has been to guard theprimitive air with a religious veneration. To this he has made everything else subordinate;and, finding that the adaptation of words, even of those to which the airs havQ been sung forgenerations back, being embarrassed by a defective accompaniment, interferes with thepurity of their arrangement, he has, in almost every instance, given the music alone.The entire number of airs is upwards of 150. Of these, considerably more than 120 arenow for the first time published, the remainder being sets much superior to those alreadyknown. They may perhaps be classed with reference to three distinct epochs, as the veryancient, the ancient, and those composed from the time of Carolan to that of Jackson and
issue Number
1
page Number
12
periodical Author
Edward Bunting
issue Publication Date
1840-01-01T00:00:00
allowedRoles
anonymous,guest,friend,member