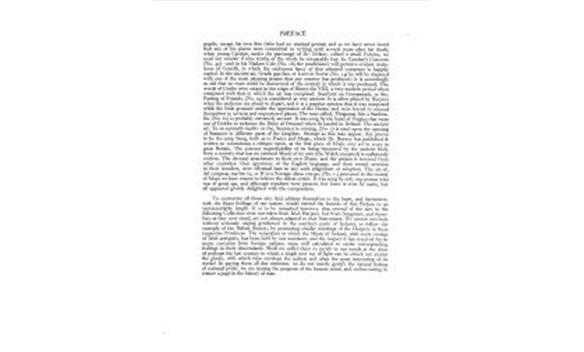 Previous | Next
Bunting - A General Collection of the Ancient Irish Music, Volume 1, Issue 1, Page 6
1 views
Favourite | Share | Feedback
periodical Publisher
W.Power & Co.,Dublin 1796
periodical Editor
Edward Bunting
periodical Title
Bunting - A General Collection of the Ancient Irish Music
volume Number
1
issue Content
PREFACEpupils, except his own Son (who had no musical genius) and as we have never heardthat any of his pieces were committed to writing until several years after his death,when young Carolan, under the patronage of Dr. Delany, edited a small Volume, weneed not wonder if nine tenths of the whole be irreparably lost. In Carolans Concerto(No. 4 2)afld in his 1\Iadam Cole (No. 6) the practitioner will perceive evident imita-tions of Correlli, in which the exuberant fancy of that admired composer is happilycopied. In the ancient air, Gradh gan fibs, or Love in Secret (No. 14) he will be charmedwith one of the most pleasing strains that any country has produced; it is accordinglyso old that no trace could be discovered of the century in which it was produced. Thewords of Coolin were extant in the reign of Henry the VIII, a very modern period whencompared with that in which the air was composed. Scarfuint na Gompanach, or the,Parting of Friends, (No. 25) is considered as very ancient. It is often played by 1-larperswhen the audience are about to depart, and it is a popular opinion that it was composedwhile the Irish groaned under the oppression of the Danes, and were forced to concealthemselves in caverns and sequestered places. The tune called, Thugamar fein a Sambra-un. (No. 6i) is probably extremely ancient. It was sung by the band of Virgins that wentout of Dublin to welcome the Duke of Ormond when he landed in Ireland. The ancientair, Ta an samradh teacht: or the, Summer is coming, (No. 7) is used upon the openingof Summer in different parts of the kingdom. Strange as this may appear, this provesto be the same Song, both as to Poetry and Music, which Dr. Burnev has published &written so voluminous a critique upon, as the first piece of Music ever set in score ingreat Britain. The extreme improbability of its being borrowed by the ancient Irish,from a country that has no national Music of its own (the Welsh excepted) is sufficientlyevident. The devoted attachment to their own Music, and the praises it received fromother countries; their ignorance of the English language, and their rooted aversionto their invaders, were effectual bars to any such plagiarism or adoption. The air of,Ad ccoigreac ma bin tu, or If to a Foreign clime you go, (No. i.) procured in the countyof Mayo we have reason to believe the oldest extant. It was sung by only one person whowas of great age, and although numbers were present, few knew it even by name, butall appeared greatly delighted with the composition.To enumerate all those airs, that address themselves to the heart, and harmonize,with the finest feelings of our nature, would extend the hounds of this Preface to anunwarrantable length. It is to be remarked however, that several of the airs in thefollowing Collection were not taken from Irish Harpers, but from Songsters; and there-fore as they now stand, are not always adapted to that Instrument. We cannot concludewithout seriously urging gentlemen in the southern parts of Ireland, to follow theexample of the Belfast Society, by promoting similar meetings of the Harpers in theirrespective Provinces. The veneration in which the i\Iusic of Ireland, with every vestigeof Irish antiquity, has been held by our ancestors, and the respect it has received for somany centuries from foreign nations, seem well calculated to excite correspondingfeelings in their descendants. Shall we suffer them to perish in our hands at the closeof perhaps the last century in which a single new ray of light can be struck out amidstthe gloom, with which time envelops the earliest and often the most interesting of itsworks? In paying them all due attention, we do not merely gratify the natural feelingof national pride; we are tracing the progress of the human mind, and endeavouring torestore a page in the history of man.
issue Number
1
page Number
6
periodical Author
Edward Bunting
issue Publication Date
1796-01-01T00:00:00
allowedRoles
anonymous,guest,friend,member