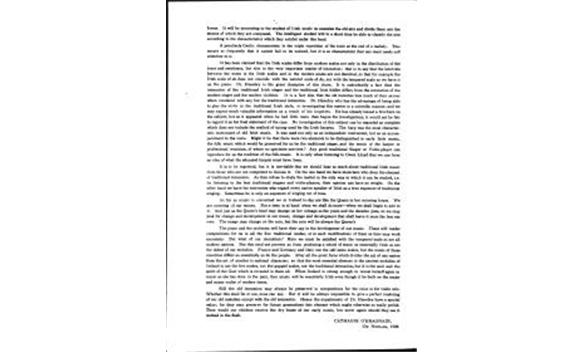 Previous | Next
Roche, Francis - Collection of Irish Airs, Marches and Dance Tunes, Volume 1, Issue 1, Page 6
36 views
Favourite | Share | Feedback
periodical Publisher
Pigott & Co. 1927
periodical Editor
Roche, Francis
periodical Title
Roche, Francis - Collection of Irish Airs, Marches and Dance Tunes
volume Number
1
issue Content
forms. it will be i.nteresting to the student of Irish music to examine the old airs and divide them into thestrains of which they are composed. The intelligent student will in a short time be able to classify the airsaccording to the characteristics which they exhibit under this head.A peculiarly Gaelic characteristic is the triple repetition of the tonic at the end of a melody. Thisoccurs so frequently that it cannot fail to be noticed, but it is so characteristic that one must needs callattention to it.It has been claimed that the Irish scales differ from modern scales not only in the distribution of thetones and semitones, but also in the very important matter of intonation; that is to say that the intervalsbetween the notes in the Irish scales and, in the modern scales are not identical, so that for example theIrish scale of do does not coincide with the natural scale of do, nor with the tempered scale as we have iton the piano. Dr. Henebry is the great champion of this claim. It is undoubtedly a fact that theintonation of the traditional Irish singer and the traditional Irish fiddler differs from the intonation of themodern singer and the modern violinist. It is a fact al ,that the old melodies lose much of their savourwhen rendered with any but the traditional intonation. Dr. Henebry who has the advantage of being ableto play the vi Iin in the traditional Irish style, is investigating this matter in a scientific manner, and wemay xpect much valuable information as a result of his inquiries. He has aheady issued a brochure onthe subject, but as it appeared when he had little more than begun his investigations, it would not be fairto regard it as his final statement of the case. No investigation o this subject can be regarded as completewhich does not include the method of tuning used by the Irish harpers. The harp was the most character-istic instrument of old Irish music. It was used not only as an independent instrument, but as an accom-paniment to the voice. Might it be that there were two elements to be distinguished in early Irish music,the folk music which would be preserved for us by the traditional singer, and the music of the harper orprofessional musician, of whom no specimen survives? Any good traditional Singer or Violin-player canreproduce for us the tradition of the folk-music. It is only when listening to Owen Lloyd that we can forman idea of what the educated harpist must have been.It is to be regretted, but it is inevitable that we should hear so much about traditional Irish musicfrom those who are not competent to discuss it. On the one hand we have musicians who deny the elementof traditional intonation. As they refuse to study the matter in the only way in which it can be studied, i.e.by listening to the best traditional singers and violin-players, their opinion can have no weight. On theother hand we have the extremists who regard every native speaker of Irish as a true exponent of traditionalsinging. Sometimes he is only an exponent of singing out of tune.As far as music is concerned we in Ireland to.da.y are like the Queen in her counting house. Weare counting ll our money. But a time is at hand when we shall do morewhen we shall begin to add toit. And just as the Queens head may change on her coinage as the years and the decades pass, so we maylook for change and development in our music, change and development that shall leave it none the less ourown. The image may change on the coin, but the coin will be always the QueensThe piano and the orchestra will have their say in the development of our music. These will rendercompositions for us in all the five traditional modes, or in such modifications of them as time may worknecessary. But what of our intonation? Here we must be satisfied with the tempered scale as are allmodern nations. But this need not prevent us from producing a school of music as essentially Irish as arethe oldest of our melodies. France and Germany and Italy use the self-same scales, but the music of thesecountries differs as essentially as do the people. After all the great force which divides the ar of one nationfrom the art of another is national character; so that the most essential element in the acient melodies ofIreland is not the five modes, nor the gapped scales, nor the traditional intonation, but it is the soul and thespirit of the Gael which is revealed in them all. When Ireland is strong enough to reveal herself again inmusic as she has done in the past, that music will be essentially Irish even though it be built on the majorand minor scales of modern times.Still the old intonation may always be preserved in compositions for the voice or for violin solo.Whether this shall be or not, none can say. But it will be always impossible to give a perfect renderingof our old melodies except with the old intonation. Hence the experiments of Dr. Henebry have a specialvalue; for they may preserve for future generations this element which might otherwise so easily perish.Then would our children receive the dry bones of our early music, but never again should they-see itclothed in the flesh.CATHAOIR OBRAONAIN,UM NODLAG, 1909.
issue Number
1
page Number
6
periodical Author
Roche, Francis
issue Publication Date
1982-01-01T00:00:00
allowedRoles
anonymous,guest,friend,member