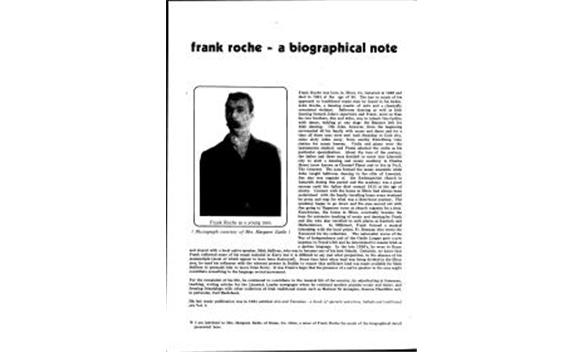 Previous | Next
Roche, Francis - Collection of Irish Airs, Marches and Dance Tunes, Volume 1, Issue 1, Page 4
40 views
Favourite | Share | Feedback
periodical Publisher
Pigott & Co. 1927
periodical Editor
Roche, Francis
periodical Title
Roche, Francis - Collection of Irish Airs, Marches and Dance Tunes
volume Number
1
issue Content
frank roche a biographical noteFrank Roche was born in Elton, Co. Limerick in 1866 anddied in 1961, at the age of 95. The key to much of hisapproach to traditional music may be found in his father,John Roche, a dancing master of note and a classicallyorientated violinist. Ballroom dancing as well as Irishdancing formed Johns repertoire and Frank, more so thanhis two brothers, Jim and John, was to inherit this facilitywith dance, holding at one stage the Munster belt forIrish dancing. Old John, however, from the beginningsurrounded all his family with music and dance and for atime all three sons were sent each Saturday to Cork city, -some sixty miles away, from nearby Knocklong trainstation for music lessons. Violin and piano were theinstruments studied, and Frank selected the violin as hisparticular specialisation. About the turn of the century,the father and three sons decided to move into Limerickcity to start a dancing and music academy in CharlesStreet (now known as Clontarf Place) and to live in No.3,The Crescent. The sons formed the music ensemble whileJohn taught ballroom dancing to the elite of Limerick.Jim also was organist at the Redemptorist church inLimerick during this period and the academy was a greatsuccess until the father died around 1913 at the age ofninety. Contact with the home in Elton had always beenmaintained with the family travelling home every weekendby pony and trap for what was a three-hour journey. Theacademy began to go down and the sons moved out withJim going to Tipperary town as church organist for a time.Knocktoran, the house in Elton, eventually became thebase for extensive teaching of music and dancing by FrankF ank Roche as a oun man and Jim who also travelled to such places as Kanturk andr g Herbertstown. In Milistreet, Frank formed a musicalfriendship with the local priest, Fr. Brennan who wrote the( Photograph courtesy of Mrs. Margaret Earlie ) Foreword for his collection. The nationalist waves of theWar of Independence and of the Gaelic League gave a newimpetus to Franks life and he determined to master Irish asa spoken language. In the late 1920s, he went to Kerryand stayed with a local native speaker, Mick Sullivan, who was to become one of his best friends. Certainly, we know thatFrank collected some of his music material in Kerry but it is difficult to say just what proportion, in the absence of hismanuscripts (most of which appear to have been destroyed). Some time later when land was being divided in the Eltonarea, he used his influence with the relevant powers in Dublin to ensure that sufficient land was made available for MickSullivan to persuade him to move from Kerry. It was Franks hope that the presence of a native speaker in the area mightcontribute something to the language revival movement.For the remainder of his life, he continued to contribute to the musical life of the country, by adjudicating at feiseanna,teaching, writing articles for the Limerick Leader newspaper where he criticised modern popular music and dance, andforming friendships with other collectors of Irish traditional music such as Mairead Ni Annagain. Seamus Clandillon and,in particular, Carl Hardebeck.His last music publication was in 1931 entitled Airs and Fantasies a book of operatic selections, ballads and traditionalairs Vol. 4.* I am indebted to Mrs. Margaret Earlie of Ennis, Co. Clare, a niece of Frank Roche for much of the biographical detailpresented here.
issue Number
1
page Number
4
periodical Author
Roche, Francis
issue Publication Date
1982-01-01T00:00:00
allowedRoles
anonymous,guest,friend,member