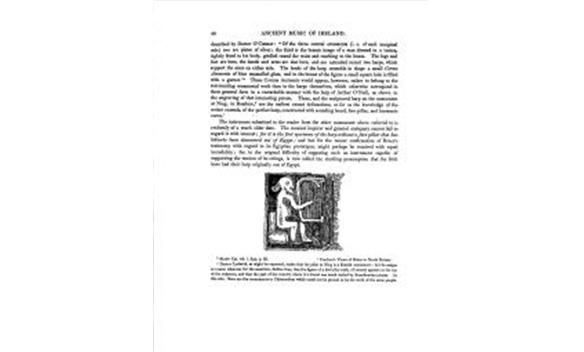 Previous | Next
Bunting - The Ancient Music of Ireland, Volume 1, Issue 1, Page 60
3 views
Favourite | Share | Feedback
periodical Publisher
Hodges & Smith, Dublin, 1840
periodical Editor
Edward Bunting
periodical Title
Bunting - The Ancient Music of Ireland
volume Number
1
issue Content
48ANCIENT MUSIC 0]? IRELAND.described by Doctor OConnor: Of the three central ornaments (i. e. of each marginalside) two are plates of silver; the third is the brazen image of a man dressed in a tunica,tightly fitted to his body, girdled round the waist and reaching to the knees. The legs andfeet are bare, the hands and arms are also bare, and are extended round two harps, whichsupport the arms on either side. The heads of the harp resemble in shape a small CornuAmmonis of blue enamelled glass, and in the breast of the figure a small square hole is filledwith a garnet.a These Cornua Ammonis would appear, however, rather to belong to thesurrounding ornamental work than to the harps themselves, which otherwise correspond intheir general form in a remarkable manner with the harp of Arthur ONeill, a& shown inthe engraving of that interesting person. These, and the sculptured harp on the monumentat Nieg, in Rosshire,b are the earliest extant delineations, so far as the knowledge of thewriter extends, of the perfect harp, constructed with sounding board, fore pillar, and harmoniccurve.cThe instrument submitted to the reader from the other monument above referred to isevidently of a much older date. The musical inquirer and general antiquary cannot fail toregard it with interest; for it is the first specimen of the harp without a fore pillar that hashitherto been discovered out of Egypt; and but for the recent confirmation of Brucestestimony with regard to its Egyptian prototypes, might perhaps be received with equalincredulity; for, to the original difficulty of supposing such an instrument capable ofsupporting the tension of its strings, is now added the startling presumption that the Irishhave had their harp originally out of Egypt.Stowe Cat. vol. i. App. p. 35. b Cordners Views of Ruins in North Britain.C Doctor Ledwich, as might be expected, insists that the pillar at Nieg is a Danish monument; but he assignsno reason whatever for the assertion, farther than, that the figure of a bird (the rafn, of course) appears at the topof the sculpture, and that the part of the country where it is found was much visited by Scandinavian pirates. Atthis rate, there are few monuments in Christendom which could not be proved to be the work of the same people.
issue Number
1
page Number
60
periodical Author
Edward Bunting
issue Publication Date
1840-01-01T00:00:00
allowedRoles
anonymous,guest,friend,member