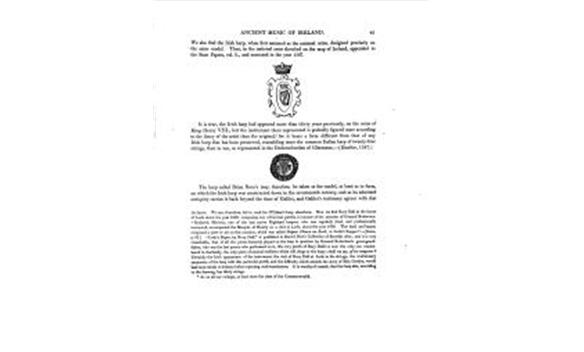 Previous | Next
Bunting - The Ancient Music of Ireland, Volume 1, Issue 1, Page 57
3 views
Favourite | Share | Feedback
periodical Publisher
Hodges & Smith, Dublin, 1840
periodical Editor
Edward Bunting
periodical Title
Bunting - The Ancient Music of Ireland
volume Number
1
issue Content
ANCIENT MUSIC OF IRELAND.45We also find the Irish harp, when first assumed as the national arms, designed precisely onthe same model. Thus, in the national arms sketched on the map of ireland, appended tothe State Papers, vol. ii., and executed in the year 1567.It is true, the Irish harp had appeared more than thirty years previously, on the coins ofKing Henry VIII., but the instrument there represented is probably figured more accordingto the fancy of the artist than the original, for it bears a form different from that of anyIrish harp that has been preserved, resembling more the common Italian harp of twenty-fourstrings, then in use, as represented in the Dodecachordon of Glarear.tus.(Basiliw, 1547.)The harp called Brian Borus may, therefore, be taken as the model, at least as to form,on which the Irish harp was constructed down to the seventeenth century, and as its admittedantiquity carries it back beyond the time of Galilei, and Galileis testimony agrees with thatthe latter. We are, therefore, led to seek for OCahans harp elsewhere. Now we find Rory Dali at the houseof Lude about the year 1650, composing one of his best purths, in honour of the ancestor of General Robertson.Roderick Morison, one of the last native Highland harpers, who was regularly bred, and professionallyinstructed, accompanied the Marquis of Huntly on a visit to Lude, about the year 1650. This bard and harpercomposed a port or air on this occasion, which was called Suipar Chiurn na Leod, or Ludes Supper._(Gunn,p. 91.) Ludes Super, by Rory Dali, is published in Daniel Dows Collection of Scottish Airs; and it is veryremarkable, that of all the pieces formerly played on the harp in question by General Robertsons great-grand-father, who was the last person who performed on it, this very purth of Rory Dalis is now the only one remem-bered in the family, the only piece of musical tradition which still clings to the harp_shall we say, of its composer PCertainly the Irish appearance of the instrument, the visit of Rory Dali at Lude in his old age, the traditionaryconnexion of the harp with this particular purth, and the difficulty which attends the story of Miss Gardyn, wouldlead most minds to hesitate before rejecting such onclusions. - It is worthy of remark, that this harp also, accordingto the drawing, has thirty strings. As on all our coinage, at least since the time of the Commonwealth.
issue Number
1
page Number
57
periodical Author
Edward Bunting
issue Publication Date
1840-01-01T00:00:00
allowedRoles
anonymous,guest,friend,member