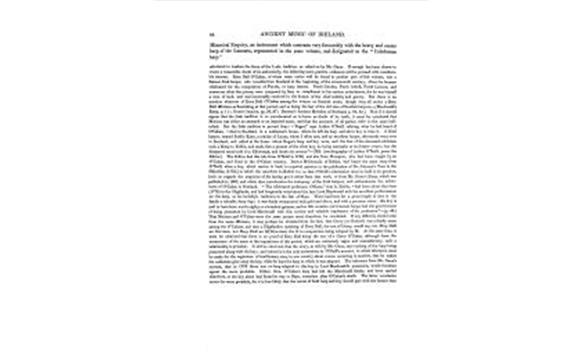 Previous | Next
Bunting - The Ancient Music of Ireland, Volume 1, Issue 1, Page 56
4 views
Favourite | Share | Feedback
periodical Publisher
Hodges & Smith, Dublin, 1840
periodical Editor
Edward Bunting
periodical Title
Bunting - The Ancient Music of Ireland
volume Number
1
issue Content
44 ANCIENT MUSIC OF IRELAND.Historical Enquiry, an instrument which contrasts very favourably with the heavy and coarseharp of the Lamonts, represented in the same volume, and aesignated as the Caledonianharp.calculated to weaken the force of the Lude tradition, as relied on by Mr. Gunn. If enough has been shewn tocreate a reasonable doubt of its authenticity, the following more positive evidences will be perused with considera-ble interest. Rory Dali OCahan, of whom some notice will be found in another part of this volume, was afamous Irish harper, who travelled into Scotland in the beginning of the seventeenth century, where he becamecelebrated for the composition of Purths, or harp lessons. Purth Gordon, Purth Atholl, Purth Lennox, andnumerous other fine pieces, were composed by him, in compliment to his various entertainers, for ho was himselfa man of rank, and was honourably received in the houses of the chief nobility and gentry. But there is nomention whatever of Rory Dali OCahan among the writers on Scottish music, though they all notice a RoryDali Morison as flourishing at that period, and as being the last of the old race of Scottish harpers. -_(MacdonaldsEssay, p. 11; Gunns Inquiry, pp. 95, 97; Dauneys Ancient Melodies of Scotland, p. 84, &c.) Now if it shouldappear that the Irish tredition is so corroborated as to leave no doubt of its truth, it must be concluded thatMorison was either an assumed or an imputed name, and that the accounts of all parties refer to the same indi-vidual. But the Irish tradition is proved thus: Roger, says Arthur ONeill, relating what he had heard ofOCahan, died in Scotland, in a noblemans house, where he left his harp and silver key to tune it. A blindharper, named Echlin Kane, a scholar of Lyons, whom I often met, and an excellent harper, afterwards went overto Scotland, and called at the house where Rogers harp and key were, and the heir of the deceased noblemantook a liking to Echlin, and made him a present of the silver key, he being namesake to its former owner; but thedissipated rascal sold it in Edinburgh, and drank the money.(MS. Autobiography of Arthur ONeill, penes theEditor.) The Editor had this tale from ONeill in 1792, and also from Hempson, who had been taught by anOCahan, and lived in the OCahan country. Doctor MDonnell, of Belfast, had heard the same story fromONeill, when a boy, which carries it back to a period anterior to the publication of Dr. Johnsons Tour in theHebrides, (1773,) in which the anecdote is alluded to; so that ONeills information must be held to be genuine,both as regards the suspicion of his having got it either from that work, or from Mr. Gunns Essay, which waspublished in 1807, and which thus corroborates the testimony of the Irish harpers, and authenticates the adven-tures of OCahan in Scotland. The celebrated performer, OKane, that is, Echlin, had been about that time(1773) in the Highlands, and had frequently entertained the late Lord Macdonald with his excellent performanceson the harp, at his lordships residence in the Isle of Skye. There had been for a great length of time in thefamily a valuable ha p key; it was finely ornamented with gold and silver, and with a precious stone: this key issaid to have been worth eighty or a hundred guineas, and on this occasion our itinerant harper had the good fortuneof being presented by Lord Macdonald with this curious and valuable implement of his profession..(p. 48.)That Morison and OCahan were the same person must, therefore, be concluded. If any difficulty should arisefrom the name Morison, it may perhaps be obviated from the fact, that Gorry (or Godred) was a family nameamong the OCahans, and that a Highlander, speaking of Rory Dali, the son of Gorry, would say, not Rory Dalian Gorrison, but Rory Dali an M(G)orrison, the G in composition being eclipsed by M. At the same time, itmust be admitted that there is no proof of Rory Dall being the son of a Gorry OCahan, although from theoccurrence of the name in the inquisitions of this period, which are extremely vague and unsatisfactory, such arelationship is probable. It will be observed, that the story, as told by Mr. Gunn, says nothing of the harp beingpreserved along with the key; and indeed it is the only uncertainty in ONeills account, in which allowance mustbe made for the vagueness of traditionary story in one country about events occurring in another, that he makesthe nobleman give away the key, while he kept the harp to which it was adapted. The inference from Mr. Gunnsaccount, that in 1773 there was no harp adapted to this key in Lord Macdonalds possession, would thereforeappear the more probable. Either, then, OCahans harp had left the Macdonald family, and been carriedelsewhere, or the key alone had found its way to Skye, sometime after OCahans death. The latter conclusionseems the more probable, for it is less likely that the owner of both harp and key should part with the former than
issue Number
1
page Number
56
periodical Author
Edward Bunting
issue Publication Date
1840-01-01T00:00:00
allowedRoles
anonymous,guest,friend,member