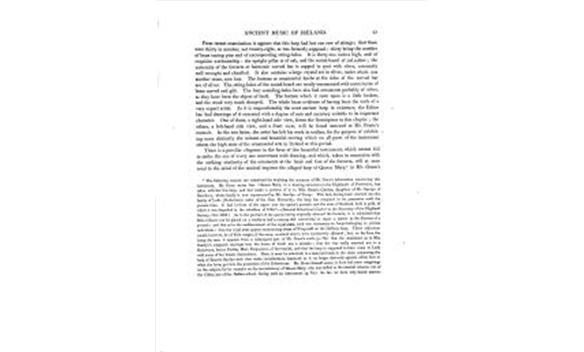 Previous | Next
Bunting - The Ancient Music of Ireland, Volume 1, Issue 1, Page 55
3 views
Favourite | Share | Feedback
periodical Publisher
Hodges & Smith, Dublin, 1840
periodical Editor
Edward Bunting
periodical Title
Bunting - The Ancient Music of Ireland
volume Number
1
issue Content
ANCIENT MUSIC OF IRELAND. 43From recent examination it appears that this harp had but one row of strings; that thesewere thirty in number, not twenty-eight, as was formerly supposed; thirty being the numberof brass tuning pins and of corresponding string-holes. It is thirty-two inches high, and ofexquisite workmanship: the upright pillar is of oak, and the sound-board of red sallow; theextremity of the forearm or harmonic curved bar is capped in part with silver, extremelywell wrought and chiselled. It also contains a large crystal set in silver, under which wasanother stone, now lost. The buttons or ornamental knobs at the sides of the curved barare of silver. The string-holes of the sound-board are neatly ornamented with escutcheons ofbrass carved and gilt. The four sounding-holes have also had ornaments probably of silver,as they have been the object of theft. The bottom which it rests upon is a little broken,and the wood very much decayed. The whole bears evidence of having been the work of avery expert artist. As it is unquestionably the most ancient harp in existence, the Editorhas had drawings of it executed with a degree of care and accuracy suitable to its importantcharacter. One of these, a right-hand side view, forms the frontispiece to this chapter; theothers, a left-hand side view, and a front view, will be found annexed to Mr. Petriesmemoir. In the two latter, the artist has left his work in outline, for the purpose of exhibit-ing more distinctly the minute and beautiful carving which on all parts of the instrumentattests the high state of the ornamental arts in Ireland at this period.There is a peculiar elegance in the form of this beautiful instrument, which cannot failto strike the eye of every one conversant with drawing, and which, taken in connexion withthe striking similarity of the ornaments at the head and foot of the forearm, will at oncerecal to the mind of the musical inquirer the alleged harp of Queen Mary, 5 in Mr. GunnsThe following reasons are submitted for doubting the accuracy of Mr. Gunus information concerning thisinstrument. Mr. Gunu states that Queen Mary, in a hunting excursion in the Flighlands of Perthsbire, hadtaken with her this harp, and had made a present of it to Miss Beatrix Gardyn, daughter of Mr. Gardyn ofBanchory, whose family is now represented by Mr. Gardyn of Troup. This lady having been married into thefamily of Lude (Robertson) cadet of the Clan Donnachy, the harp has remained in its possession until thepresent time. It had in front of the upper arm the queens portrait and the arms of Scotland, both in gold, ofwhich it was despoiled in the rebellion of 1745._(General Robertsons Letter to the Secretary of the HighlandSociety, Oct. 1805.) As to the portrait of the queen having originally adorned the forearm, it is submitted thatlittle reliance canbe placed on a tradition half a century old, concerning so vague a matter as the likeness of aportrait ; and that as to the emblazonment of the royal arms, suc was customary on harps belonging to privateindividuals : thus the royal arms appear surmounting those of Fitzgerald on the Daliway harp. These objectionswould, however, be of little weight, if the story, as stated above, were consistently affirmed; but, so far from thisbeing the case, it appears from a subsequent part of Mr. Gunns work, (p. 78,) that the statement as to MissGardyns supposed marriage into the house of Lude was a mistake ; that she was really married, not to aRobertson, but to Findlay More Farquarson, of Invercauld, and that the harp is supposed to have come to Ludewith some of her female descendants. 1-lere, it must be admitted, is a material break in the chain connecting theharp of Beatrix Gardyn with that under consideration, inasmuch as it no longer distinctly appears either how orwhen the latter got into the possession of the Robertsons. - Mr. Gunn himself seems to have had some misgivingson the subject, for he remarks on the inconsistency of Queen Mary, who was skilled in the musical science, not ofthe Celtic, but of the Italiam school, having such an instrument. (p. 75.) So far, we have only stated matters
issue Number
1
page Number
55
periodical Author
Edward Bunting
issue Publication Date
1840-01-01T00:00:00
allowedRoles
anonymous,guest,friend,member