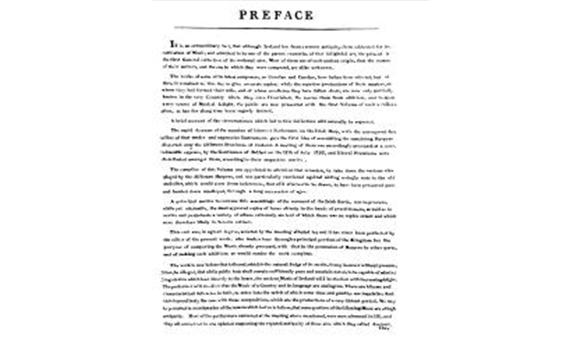 Previous | Next
Bunting - A General Collection of the Ancient Irish Music, Volume 1, Issue 1, Page 7
2 views
Favourite | Share | Feedback
periodical Publisher
W.Power & Co.,Dublin 1796
periodical Editor
Edward Bunting
periodical Title
Bunting - A General Collection of the Ancient Irish Music
volume Number
1
issue Content
PRE FACEIT is an extraordinary fat t,that although Ireland has from a remote antiquity, h en telebrate1 for itscultivation of Music, and admitted to be one of the parent countries of that delightful art, the presentthe first General collection of its national airs. Most of them are of such ancient origin, that the namesof their authors, and the era in which they were composed, are alike unknown.The works of some of its latest composers, as Conolan and Carolan, have before been selected; but ofthese it remained to this day to give accurate copies; while the superior productions of their masters,onwhom the had formed their stile, and of whose excellence they have fallen short, are now only part iallvknth n in the very Country where they once flourished. To rescue them from oblivion, and t 0 opel a flew source of Musical delight, the public are now presented with the first Volume of su h a rollec .tion, as has for along time been eagerly desired.A. brief account of the circumstances which led to this Collection will naturally be expected.The rapid decrease of the number of itinerant Performers on the Irish Harp, with the consequent de . .cline of that tender and expressive Instrument, gave the first idea of assembling the remaining Harpersdispersed OVCy the different Provinces of Ireland. A meeting of them was accordingly procured at a cofl .siderable expenre, by the Gentlemen of Belfast on the 12th of July 1192, and liberal Premiums werelistributed amongst them, accordingto their respective meritsThe cwnpiler of this Volume was appointed to attend on that occasion, to take down the various airslayed by the Mffersnt Harpers, and was particularly cautioned against adding a single note to the oldmelodies,which would seem from inferences, that will afterwards be drawn, to have been preserved pureand handed down unalloyed, through a long succession of ages.A principal motive to convene this assemblage of the remnant of the Irish Bards, was to procure,i hile yet attainable, the most approved copies of tunes already in the hands of practitioners, as well as torevive and perpetuate a variety of others extremely ancient of rhich there was no copies extant and whichwere therefore likely io become extinct.This end was, in agreat degree, secured by the meeting alluded to; and it has since been perfected bythe edlt )r of the present work, who made a tour through a principal portion of the Xingdom for thepurpose of comparing The Music already procured, with that in the possession of Harpers In other parts,and of making sub additions as would render the work complete-.The work is now before that tribunal,which is the natural Judge of its merits, it may however without presumtion,be alleged,that while public taste shall remain sufficiently pure and unadulterated, to be capable of admireing strains which lead directly to the heart, the ancient Music of Ireland will be studied with increasingdeli J t.The performer 1 TC(Olk(t that the Music of a Country and its language are analagous. There are idioms and(haracteristical delicacies iii both, to enter into the spirit of which some time and. practict are requisite: Andthis is peculiarly the case with those compositions, which are the productions of a very distant period. c rn;.ybe permittedto mention few of the reasons 4hich leadus to believe,that some portions of the followingMusic are ofhighantiquity. Most of the performers convened at the meeting above nientioned,were men advanced in life, andthey all concurred in one opinion respecting the reputed antiquity of those airs whit h they called An( lent.They
issue Number
1
page Number
7
periodical Author
Edward Bunting
issue Publication Date
1796-01-01T00:00:00
allowedRoles
anonymous,guest,friend,member