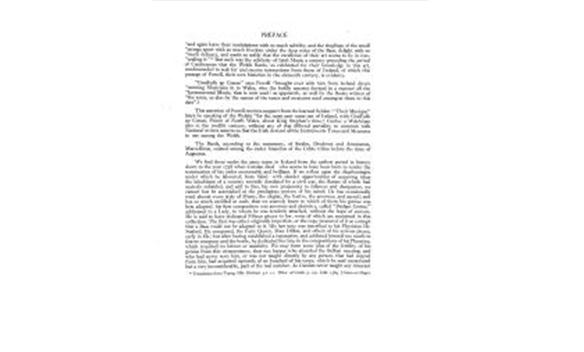 Previous | Next
Bunting - A General Collection of the Ancient Irish Music, Volume 1, Issue 1, Page 5
1 views
Favourite | Share | Feedback
periodical Publisher
W.Power & Co.,Dublin 1796
periodical Editor
Edward Bunting
periodical Title
Bunting - A General Collection of the Ancient Irish Music
volume Number
1
issue Content
PREFACEand again leave their modulations with so much subtilty, and the tinglings of the smallstrings sport with so much freedom under the deep notes of the Bass, delight with somuch delicacy, and sooth so softly that the excellence of their art seems to lie in con-cealing it.* But such was the celebrity of Irish Music a century preceding the arrivalof Cambrenses that the Welch Bards, so celebrated for their knowledge in this art,condescended to seek for and receive instructions from those of Ireland, of which thispassage of Powell, their own historian in the sixteenth century, is evidence.Gruffydh ap Conan says Powell brought over with him from ireland (liverscunning Musicians in to Wales, who (he boldly asserts) devised in a manner all theInstrumental Music, that is now used: as appeareth, as well by the Books written ofthe same, as also by the names of the tunes and measures used amongest them to thisdate.t -This assertion of Powell receives support from the learned Selden: Their iv lusique(says he speaking of the Welsh) for the most part caine out of Ireland, with Gruffydhap Conan, Prince of North Wales, about King Stephens time4 Cardoc a Welshmnanalso in the twelfth century, without any of that illiheral partiality so common withNational writers assures us that the Irish devised all the Instruments Tunes and Measuresin use among the Welsh.The Bards, according to the testemonv, of Strabo, Diodorus and Ammnianus,Marcellinus, existed among the ruder branches of the Celtic tribes before the time ofAugustus.We find them under the same name in Ireland from the earliest period in historydown to the year 1738 when Carolan died who seems to have been born to render thetermination of his order memorable and brilliant. If we reflect upon the disadvantagesunder which he laboured; born blind - -with slender opportunities of acquiring ideasthe inhabitant of a country recently desolated by a civil war, the flames of which hadscarcely subsided, and add to this, his own propensity to Idleness and dissipation, wecannot but be astonished at the prodigious powers of his mind; Tie has occasionallytried almost every style of i\Iusic; the elegiac, the festive, the amorous, and sacred; andhas so much excelled in each, that we scarcely know to which of them his genius wasbest adapted. his first composition was amorous and plaintive, called Bridget Cruise,addressed to a Lady, to whom he was tenderly attached, without the hope of success.He is said to have dedicated Fifteen pieces to her, none of which are contained in thiscollection. The first was either originally imperfect, or the copy procured of it so corruptthat a Bass could not be adapted to it. His last tune was inscribed to his Physician Dr.Staford. He composed, the Fairy Queen, Rose T)illon, and others of his serious pieces,early in life; hut after having established a reputation, and addicted himself too much tofestive company and the bottle, he dedicated his time to the compositions of his Planxtics,which required no labour or assiduity \\ c ma form somc idca of thc fLrtlllt\ of hisgenius from this circumstance, that one harper who attended the Belfast meeting, andwho had never seen him, or was not taught directly by any person, that had copyedfrom him, had acquired upwards of an hundred of his tunes, which he said constitutedbut a very inconsiderable, part of the real number. As Carolan never taught any itinerant* Translation from Topog. Hib. Distinct. 3.C. ii. tilist. of Camb. p. ii. Edit. 1584. Notes on Drayt.
issue Number
1
page Number
5
periodical Author
Edward Bunting
issue Publication Date
1796-01-01T00:00:00
allowedRoles
anonymous,guest,friend,member