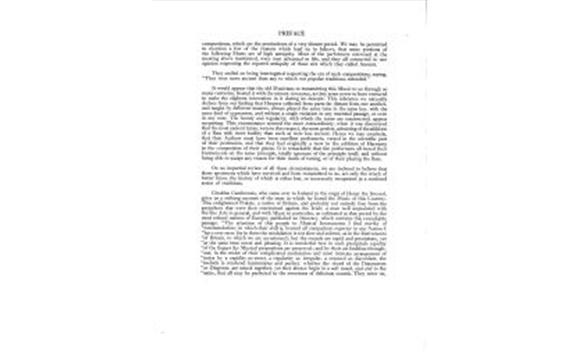 Previous | Next
Bunting - A General Collection of the Ancient Irish Music, Volume 1, Issue 1, Page 4
1 views
Favourite | Share | Feedback
periodical Publisher
W.Power & Co.,Dublin 1796
periodical Editor
Edward Bunting
periodical Title
Bunting - A General Collection of the Ancient Irish Music
volume Number
1
issue Content
PREFACEcompositions, which are the productions of a very distant period. We may be permittedto mention a few of the reasons which lead us to believe, that some portions ofthe following 1 Iusic are of high antiquity. Most of the performers convened at themeeting above mentioned, were men advanced in life, and they all concurred in oneopinion respecting the reputed antiquity of those airs which they called Ancient.They smiled on being interrogated respecting the era of such compositions, saying,They were more ancient than any to which our popular traditions extended.It would appear that the old Musicians in transmitting this Music to us through somany centuries, treated it with the utmost reverence, as they seem never to have venturedto make the slightest innovation in it during its descent. This inference we naturallydeduce from our finding that Harpers collected from parts far distant from one another,and taught by different masters, always played the same tune in the same key, with thesame kind of expression, and without a single variation in any essential passage, or evenin any note. The beauty and regularity, with which the tunes are constructed, appearsurprising. This circumstance seemed the more extraordinary, when it was discoveredthat the most ancient tunes, were in this respect, the most perfect, admitting of the additionof a Bass with more facility than such as were less ancient. Hence we may conclude,that their Authors must have been excellent performers, versed in the scientific partof their profession, and that they had originally a view to the addition of Harmonyin the composition of their pieces. It is remarkable that the performers all tuned theirInstruments on the same principle, totally ignorant of the principle itself, and withoutbeing able to assign any reason for their mode of tuning, or of their playing the Bass.On an impartial review of all these circumstances, we are inclined to believe thatthose specimens which have survived and been transmitted to us, are only the wreck ofbetter times, the history of which is either lost, or incorrectly recognised in a confusedseries of traditions.Giraldus Cambrensis, who came over to Ireland in the reign of Henry the Second,gives us a striking account of the state in which he found the Music of this Country.This enlightened Prelate, a native of Britain, and probably not entirely free from theprejudices that were then entertained against the Irish; a man well acquainted withthe fine Arts in general, and with Music in particular, as cultivated at that period by themost refined nations of Europe; published an Itinerary, which contains this remarkablepassage: The attention of this people to i\Iusical Instruments I find worthy ofcommendation; in which their skill is, beyond all comparison superior to any Nation Ihave ever seen: for in these the modulation is not slow and solemn, as in the Instrumentsof Britain, to which we are accustomed; but the sounds are rapid and precipitate, vetat the same time sweet and pleasing. It is wonderful how in such precipitate rapidityof the fingers the Musical proportions are preserved; and by their art faultless through-out, in the midst of their complicated modulation and most intricate arrangement ofnotes by a rapidity so sweet, a regularity so irregular, a concord so discordant, themelody is rendered harmonious and perfect: whether the chord of the Diatesseronor Diapente, are struck together, yet they always begin in a soft mood, and end in thesame, that all may be perfected in the sweetness of delicious sounds. They enter on,4 -
issue Number
1
page Number
4
periodical Author
Edward Bunting
issue Publication Date
1796-01-01T00:00:00
allowedRoles
anonymous,guest,friend,member