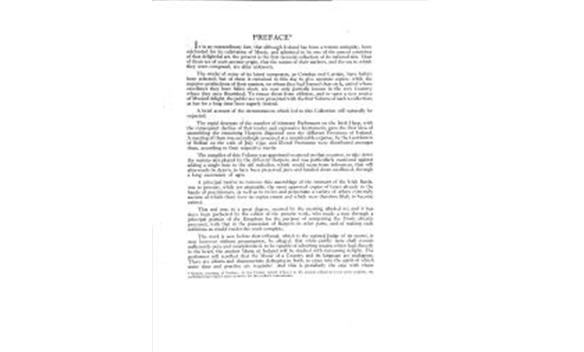 Previous | Next
Bunting - A General Collection of the Ancient Irish Music, Volume 1, Issue 1, Page 3
2 views
Favourite | Share | Feedback
periodical Publisher
W.Power & Co.,Dublin 1796
periodical Editor
Edward Bunting
periodical Title
Bunting - A General Collection of the Ancient Irish Music
volume Number
1
issue Content
PREFACE*IT is an extraordinary fact, that although Ireland has from a TCm()tC aflti(Illity, beencelebrated for its cultivation of Music, and admitted to be one of the parent countriesof that delightful art, the present is the first General collection of its nattonal airs. Mostof them are of such ancient origin, that the names of their authors, and the era in whichthey were composed, are alike unknown.The works of some of its latest composers, as Conolan and Carolan, have beforebeen selected; but of these it remained to this day to give accurate copies; while thesuperior productions of their masters, on whom they had formed their style, and of whoseexcellence they have fallen short, are now only partially known in the very Countrywhere they once flourished. To rescue them from oblivion, and to open a new sourceof Musical delight, the public ate now presented with the first \Tolume of such a collection,as has for a long time been eagerly desired.A brief account of the circumstances which led to this Collection will naturally beexpected.The rapid decrease of the number of itinerant Performers on the Irish Ilarp, withthe consequent decline of that tender and expressive Instrument, gave the first idea ofassembling the remaining Harpers dispersed over the different Provinces of Ireland.A meeting of them was accordingly procured at a considerable expense, by the Gentlemenof Belfast on the izth of July 1792, and liberal Premiums were distributed amongstthem, according to their respective merits.The compiler of this olume was appointed to attend on that occasion, to take clownthe various airs played by the different 1 larpers, and was particularly cautioned againstadding a single note to the 01(1 melodies, which would seem from inferences, that willafterwards be drawn, to have been preserved pure and handed down unalloyed, througha long succession of ages.A principal motive to convene this assemblage of the remnant of the Irish Bards,was to procure, while vet attainable, the most approved copies of tunes already in thehands of practitioners, as well as to revive and perpetuate a variety ol others extremelyancient of which there were no copies extant and which were therefore likel to becomeextinct.This end was, in a great degree, secured by the meeting alluded to; and it hassince been perfected by the editor of the preset t work, who made a tour through aprincipal portion of the Kingdom for the purpose of comparing the Music alreadyprocured, with that in the possession of liarpers in other parts, and of making suchadditions as would render the work complete.The work is now before that tribunal, which is the natural Judge of its merits, itmay however without presumption, be alleged, that while public taste shall remainsuflicientlv and unadulterated, to he Capal)le of admiring strains which lead directlyto the heart, thc ancicnt Music of Inland n ill b ,. tudld ith incrca ing diight Fhcperformer will recollect that the Music of a Countr and its language are analagous.Thcrc arc idioms and charactc ri tic dclictcics in both, to tnt.r into thi p1r1t of u hichsome time and practice are requisite: And this is peculiarly the case with those* Modern resettinC of Preface. \s the lreface (which follu s) to this aflClent cc,lle t on is not easil readable, thepublishers have had it reset as aI,ove for the readers convenience.
issue Number
1
page Number
3
periodical Author
Edward Bunting
issue Publication Date
1796-01-01T00:00:00
allowedRoles
anonymous,guest,friend,member