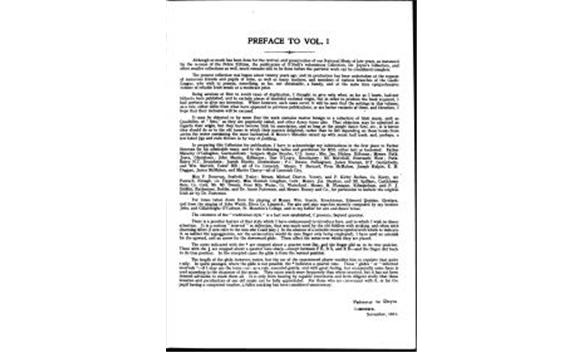 Previous | Next
Roche, Francis - Collection of Irish Airs, Marches and Dance Tunes, Volume 1, Issue 1, Page 7
38 views
Favourite | Share | Feedback
periodical Publisher
Pigott & Co. 1927
periodical Editor
Roche, Francis
periodical Title
Roche, Francis - Collection of Irish Airs, Marches and Dance Tunes
volume Number
1
issue Content
PREFACE TO VOL. IAlthough so much has been done for the revival, and preservation of our National Music of late years, as instancedby the re-issue of the Petrie Edition, the publication of ONeills voluminous Collection, Dr. Joyces Collection, andother smaller collections as well, much remains still to be done before the patriotic work can be considered complete.The present collection was begun about twenty years ago, and its production has been undertaken at the requestof numerous friends and pupils of mine, as well as many teachers, and members of various branches of the GaelicLeague, who wish to possess, something, so far, not obtainable, a handy, and at the same time comprehensivevolume of reliable Irish music at a moderate price.Being anxious at first to avoid cases of duplication, I thought to give only what, as far as I knew, had nothitherto been published, and to exclude pieces of doubtful national origin, but in order to produce the book required, Ihad perforce to alter my intention. Where however, such cases occur, it will be seen thaf the settings in this volume,as a rule, either differ from what have appeared in previous publications, or are better variants of them, and therefore, Ihope that their inclusion will be excused.It may be objected to by some that the work contains matter foreign to a collection of Irish music, such asQuadrilles, or Sets, as they are popularly called, and other dance tunes also. That objection may be admitted asregards their origin, but they have become Irish by association, and so long as the people dance Sets, etc., it is betterthey should do so to the old tunes in which their parents delighted, rather than be left depending on those books fromacross the water containing the most hackneyed of Moores Melodies mixed up with music hail trash, and, perhaps, afew faked jigs and reels thrown in by way of padding.In preparing this Collection for publication, I have to acknowledge my indebtedness in the first place to FatherBrennan for his admirable essay, and to the following ladies and gentlemen for MSS. either lent or bestowed. FatherMalachy OCallaghen, Gorinanstown; Surgeon Major Bourke, U.S. Army; Mrs. Jas. Hickey, Killonan; Messrs. Patk.Joyce, Glenisheen; John Martin, Kilfanane; Dan OLeary, Knockaney; Ml. Mulvihill, Newcastle West; Patk.Barry N.T. Drumkeen; Joseph Hurley, Glenbrohane; P.C. Dwane, Pallasgreen, James Noonan, NT. Garrydoolis,and Wm. Merrick, Tower Hill; all of Co. Limerick. Messrs. T. Bernard, Peter McMahon, Joseph Halpin, E. B.Duggan, James McMahon, and Martin Clancy.all of Limerick City.Miss F. Donovan, Seafield, Tralee; Messrs. Michael Disette, Ventrv, and P. Kirby Rathea, Co. Karry, AnPaorach, Nenagh, Co. Tipperary, Miss Hannah Coughlan, Cork; Messrs. Jas. Sheehan, and Ml. Spillane, CastletownBere, Co. Cork, Mr. Ml. Dwane, Four Mile Water, Co. Waterford; Messrs. M. Flanagan, Kilmainham, and P. J.Griffith, 1 athmines, Dublin, and Dr. Annie Patterson, and Messrs. Boosey and Co., for permission to include the originalIrish air by Dr. Patterson.For tunes taken down from the playing of Messrs. Wm. Guerin, Knocktoran, Edmond Quinlan, Glenlara,and from the singing of John Walsh, Elton Co. Limerick; For airs and pipe marches recently composed by my brotherJohn, and Gillabridghe OCathain, St. Munchins College, and to my father for airs and dance tunes.The existence of the traditional style is a fact now established, I presume, beyond question.There is a peculiar feature of that style which I have endeavoured to introduce here, and to which I wish to directattention. It is a curious interval or inflection, that was much used by the old fiddlers with striking, and often withcharming effect (I now refer to the men who Could play.) In the absence of a suitable musical symbol with which to indicateit, as neither the appoggiatura, nor the acciaccatura would do (one finger only being employed), I have used an asteriskfor the upward, and an arrow for the downward glide. These affect the notes over which they are placed.The notes indicated with thee are stopped about a quarter tone flat, .nd t , ie finger lid on to its true position.Those with the , are stopped about a quarter tone sharpexcept between F E, B A, and E Dand the finger slid backto its true position. In the excepted cases the glide is from the normal position.The length of the glide, however, varies, but the ear of the experienced player enables him to regulate that quiteeisily, I t t quick passages, where the glide is not possible, the * indicates a quarter tone. These glides or inflectedintervals if I may use the termare, as a rule, executed gently, and with great feeling, but occasionally some force isused according to the character of the music. They occur much more frequently than where inserted, but it has not beendeemed advisable to mark them all. It is only from hearing by capable executants and from diligent study that thesebeauties and peculiarities of our old music can be fully appreciated. For those who are conversant with it, or for thepupil having a competent teacher, a fuller marking has been considered unnecessary.e Q6 rreLIMERICK.November, 1911.
issue Number
1
page Number
7
periodical Author
Roche, Francis
issue Publication Date
1982-01-01T00:00:00
allowedRoles
anonymous,guest,friend,member