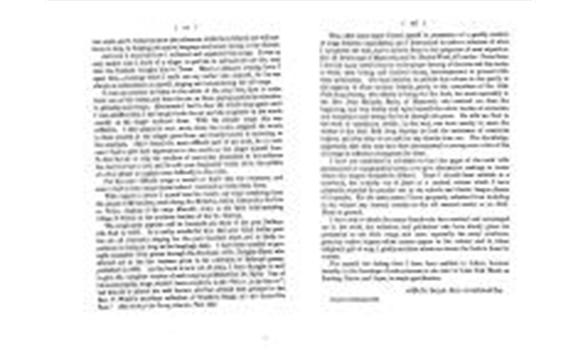 Previous | Next
Journal of the Irish Folk Song Society, Volume 3, Issue 16, Page 11
11 views
Favourite | Share | Feedback
periodical Publisher
Irish Folk Song Society
periodical Editor
[Periodical]
periodical Title
Journal of the Irish Folk Song Society
volume Number
3
issue Content
( xx( xxiwas made, and I wished to show the influences which have helped, and will con-tinue to help, in keeping the native language and music strong in the district.And now I must tell how I collected and registered the songs. It was aneasy mat er once I knOw of a singer to get him to call and see me the nexttime his business brought him to Tuam. Many a pleasant evening have Ispent thus_evenings which I could see my visitor also enjoyed, for he wasalways as enthusiastic as myself, singing and remembering the old songs.It was my practice to listen to the whole of the song first, then to writedown one or two verses, and learn the air on those, paying particular attentionto phrasing and tempo. Afterwards I had to hear the whole song again untilI was satisfied that I had caught both the air and the emphasis on the wordsexactly as the singer rendered them. With the simpler songs this wassufficient. I then played it over, wrote down the notes, assigned the wordsto them exactly as the singer gave them, and finally barred it according tothe emphasis. This I found the most difficult part of my work, for in eachcase I had to give first importance to the words, as the singer himself does.To him the air is only the medium of conveying pleasantly to his audiencethe story he has to tell, and he will even frequently break off in the middleof a fine phrase to explain some difficulty in the verse.For the more difficult songs a second or third visit was necessary, andsome I had to hear many times before I ventured to write them down.With regard to. others I myself was the visitor, my trips extending fjomthe slopes of Mwaoilrea, overlooking the Killeries, where I listened to Sitil5 nye biipc singing of far away Murrisk, down to the little Irish-speakingvillage of Tawin on the southern borders of the Co. Gaiway.The songs most popular still in Connacht are those of the poet Raftery,who died in 1835. It is really wonderful how this poor blind fiddler poethas set all Oonnacht singing for the past hundred years, and is likely tocontinue so doing as long as the language lasts. I have been enabled to giveeight examples of his poems through the kindness of Dr. Douglas Hyde, whoallowed me tO use the versions given in his collection of Rafterys poems,published in 1903. As the book is now out of print, I have thought it wellto give the complete version of each songas published by Dr. Hyde. One ofhis most popular songs, which I have not given, is the be n e n ipbut this air is almost too well known, and has already been printed in theRev. P. Walshs excellent collection of Southern Songs, as M C p itUiibAll. (See Ct1uaTa &o be E iii 1 t&n, Part III.)Thus after some years I found myself in possession of a goodly numberof songs hitherto unpublished, and I determined to make a selection of whatI considered the best, and to ubmit them to the judgment of such experts asRev. H. Bewerunge of Maynooth, and Dr. Charles Wood, of London. From thOrnI derived many useful hints as to the proper barring of the airs and the modesto which they belong, and received strong encouragement to proceed withtheir publication. The final decision to publish this volume is due partly tothe urgency of those musical friends, partly to the committee of the IrishFolk Song Society, who offered to bring out the book, but more especially tothe Rev. Dean Malachy Eaton, of Maynooth, who assisted me from thebeginning, and very kindly took upon himself the whole burden of correctionand translation and seeing the book through the press. He tells me that inthe work of translation (which, by the way, was done merely to meet thewishes of the Irish Folk Song Society) he had the assistance of numeroushelpers, and that they do not as1 for any thanks from me. The knowledge,apparently, that they may have been instrumental in saving even a few of theold songs is sufficient recompense for them.I have not considered it advisable to load the pages of the work withgrammatical or topographical notes, or to give alternative readings in verseswhere the singers themselves differed. These I should deem suitable to atext-book, but entirely out of place in a musical volume which I haveprimarily intended for popular use in the schools and Gaelic League classesof Oonnacht. For the same reason I have purposely refrained from includingin the volume any learned treatise on the old musical modes or on Folk-Music in general.I have only to thank the many friends who have assisted and encouragedme in the work, the collectors and publishers who have kindly given mepermission to use their songs, and more especially the many courteous,generous native singers whose names appear in the volume, and to whosedelightful gift of song I gladly attribute whatever charm the book is found tocontain. For myself, the feeling that I have been enabled to follow, howeverhumbly, in the footsteps of such pioneers in the field of Irish Folk Music asBunting, Petrie, and Joyce, is ample gratification.tu lt tlont4 i , 1918.eiMIn be ii ihic o1sDe tb .V
issue Number
16
page Number
11
periodical Author
[Periodical]
issue Publication Date
1967-01-01T00:00:00
allowedRoles
anonymous,guest,friend,member