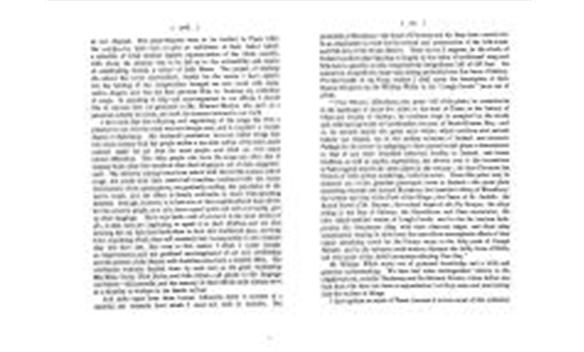 Previous | Next
Journal of the Irish Folk Song Society, Volume 3, Issue 16, Page 10
11 views
Favourite | Share | Feedback
periodical Publisher
Irish Folk Song Society
periodical Editor
[Periodical]
periodical Title
Journal of the Irish Folk Song Society
volume Number
3
issue Content
( xix )( xviil )at our disposal. The prize-winners were to be invited to Tuam whenthe Aepi e cs were ov r, to give an exhibition of their talent beforea selection of Irish musical experts representative of the whole country,with whom the decision was to be left as to the advisability and meansof establishing therein a school of Irish Music. The project of startingthe school has never materialized, chiefly for the reason I have stated;but the holding of the competitions brought me into touch with manynative singers, and was the first genuine fillip in forming my collectionof songs. In speaking of help and encouragement in our efforts, I shouldlike to express here our gratitude to Mr. Edward Martyn, who gave us agenerous subsidy for years, and took the keenest interest in cur work.I have said that the collecting and registering of the songs has been apleasure to me, but the work was not always easy, and it required a certaindegree of diplomacy. My husbands profession, however, which brings himinto close contact with the people within a ten-mile radius of the town, madematters easier for me than for most people, and tided me over manyinitial difficulties. The older people who have the songs are often shy ofsinging them; they feel somehow that their singing is out of date, unappreci-ated. The children coming home from school with their little an mic schoolsongs, the youth with their music-hall inanities, combined with the recentintroduction of the gramophone, are gradually ousting the popularity of thenative music, and. the effect is clearly noticeable in many Irish-speakingdistricts. Perhaps, however, it is less true of this neighbourhood than others,for the country people, as a rule, have a good spirit and will not readily giveup their language. Their only faultand of course it is the most serious ofall is that they are neglecting to speak it to their children, and are thussevering the one link that binds them to their rich traditional pastseveringit for something which they will certainly find incomparable to the treasurethey will have lost. But even in this matter I think I notice alreadyan improvement; and the proffered encouragement of our new Archbishopand the, priests of the district will doubtless soon have a decided effect. Thewholesome tradition handed down by such men as the great ArchbishopMac Hale, Canon Ulick Burke, and John G-lynnall giants in the languagemovementstill prevails, and the memory of their efforts must always serveas a stimulus to workers in the (*aelic revival.And quite apart from these human influences there is another of amaterial yet romantic kind which I must not omit to mention. Theproximity of Knockmathe home of Finvarra and his fairy hostmust everbe an inspiration to work for the revival and preservation of the folk-musicand folk-lore of the Tuam district. There is not, I suppose, in the whole ofIreland another place figuring so largely in the realm of traditional song andfolk-lore in general as this comparatively insignificant hill of 552 feet. Itssummit is occupied by a huge cairn dating probably from the dawn of history.For the benefit of my Tuam readers I shall quote the description of theirfamous hill given by Sir William Wilde in his Lough Corrib (now out ofprint).Cnoc 111eo (Knockma), the great hill of the plain, so conspicuousin the landscape, is about five miles to the west of Iuam, in the barony ofClare and County of Galway; its northern slope is occupied by the woodsand cultivated grounds of Castlehacket, the seat of Denis Kirwan, Esq.; andon its summit stands the great cairn within which tradition and ancienthistory say Ceasair, one of the earliest colonists of Ireland, was interred.Perhaps we do not err in assigning to this ancient burial-place a date anteriorto that of any other identified historical locality in Ireland; and hencetradition, as well as popular superstition, has thrown over it the investitureof fairy legend beyond all other places in the country; for here Finvarra, theOberon of Irish sylvan mythology, holds his court. From this point may beobtained one of the grandest panoramic views in Ireland:the great plainstretching beneath and around Knockroe; the beautiful Abbey of Knookmoy;the towers and city of the Ford of the Kings; the Tuam of St. Jarlath; theRound Tower of St. Bennan; the ruined keeps of the De Burgos; the shipsriding in the Bay of Gaiway; the Slievebloom and Clare mountains; theblue, island-studded waters of Lough Corrib; and in the far western back-ground, the Connemara Alps, with their clear-cut edges, and their sidesmomentarily varying in tints from the marvellous atmospheric effects of thatregion stretching round by the Partry range to the lofty peak of OroaghPatrick; and in the extreme north-western distance the bulky form of Nefin,and even some of the Achill mountains skirting Clew Bay. Sir William Wilde wrote out of profound knowledge and a wide andgenerous understanding. We have had other distinguished visitors to theneighbourhood, notably Thackeray and Sir Richard Burton, whose father wasborn here, who have not been so appreciative; but they came and went seeingonly the surface of things.I have spoken so much of Tuam, because it is here most of this collectionF
issue Number
16
page Number
10
periodical Author
[Periodical]
issue Publication Date
1967-01-01T00:00:00
allowedRoles
anonymous,guest,friend,member