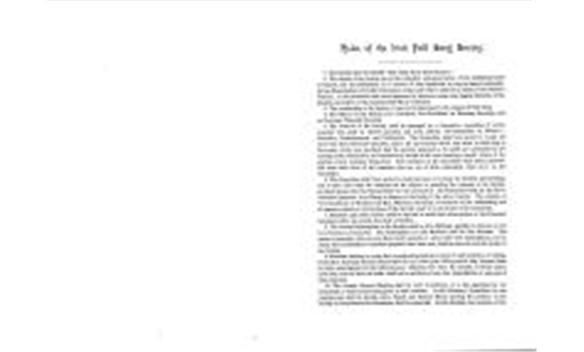 Previous | Next
Journal of the Irish Folk Song Society, Volume 3, Issue 16, Page 8
6 views
Favourite | Share | Feedback
periodical Publisher
Irish Folk Song Society
periodical Editor
[Periodical]
periodical Title
Journal of the Irish Folk Song Society
volume Number
3
issue Content
Itt.tles of the irish o1I on &cie{9.1. The Society shall be entitled THE IRISH FOLK SONG SOCIETY.2. The objects of the Society are (e) the collection and preservation of the traditional musicof Ireland, and the publication in a Journal of such specimens as may be deemed advisable;(b) the dissemination of useful information on this and relative subjects by means of the SocietysJournal; (c) the promotion and encouragement, by whatever means may appear desirable, of thepractice and culture of the national Folk Music of Ireland.3. The memhership of the Society is open to all interested in the subject of Folk Song.4. The Officers of the Society are a President, Vice.Presidents, an Honorary Secretary, andau Honorary Financial Secretary.5. The business of the Society shall be managed by a Committee consisting of twelvemembers who shall be elected annually, and form definite sub.Committees as followsExecutive, Entertainment, and Publication. The Committee shall have power to co-opt notmore than three additional members, and to fill up vacancies which may occur in their body inthe course of the year, provided that the persons proposed to be added are nominated at onemeeting of the Committee, and unanimously elected at the next meeting, a weeks notice of theelection of new members being given. Four members of the Committee shall form a.quorum.Not more than three of the members who are not of Irish nationality shall serve on theCommittee.6. The Committee shall have power to make bye-laws, to arrange for lectures and meetings,and to take other steps for carrying out the objects or guarding the interests of the Society,provided always that the General Rules be not contravened. The Committee shall, for the above-mentioned purposes, he at liberty to dispose of the funds of the above Society. The election ofVice-Presidents, of Membere and Hon. Members, the filling of vacancies in the auditorship, andall matters relating to the business of the Society, shall be in the bands of the Committee.7. Members upon their election shall be required to remit their subscriptions to the FinancialSecretary within one mouth from date of election.8. The Annual Subscription to the Society shall be Five Shillings, payable in advance on thelet of January of each year. The Subscription fur Life Members shall be Five Guineas. Thenames of members who are more than twelve months in arrear with their subscriptions, and towhom three notifications requesting payment have been sent, shall be removed from the books ofthe Society.9. Members desiring to resign their membership must give notice of such intention, in writing,to the Hon. Secretary fourteen days before the end of the year, failing which they become liablefor their subscriptions for the following year. Members who leave the Society, or whose namesbate been removed from its books, shall not be entitled to have their subscriptions or any part ofthem returned.10. The Annual General Meeting shall be held in January, on a day appointed by theCommittee, a weeks notice being given to each member. At this Meeting a Committee for theensuing year shall be elected, and a Report and Balance Sheet, showing the position of theSociety on the previous 31st December, shall be submitted. At this Meeting, two members of theF
issue Number
16
page Number
8
periodical Author
[Periodical]
issue Publication Date
1967-01-01T00:00:00
allowedRoles
anonymous,guest,friend,member