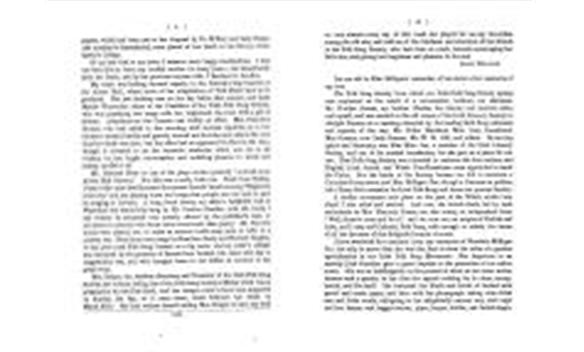 Previous | Next
Journal of the Irish Folk Song Society, Volume 3, Issue 16, Page 6
17 views
Favourite | Share | Feedback
periodical Publisher
Irish Folk Song Society
periodical Editor
[Periodical]
periodical Title
Journal of the Irish Folk Song Society
volume Number
3
issue Content
(x)papers, which had been put at her disposal by Dr. MRory and Lady Deane(the musicians descendants), were placed at her death in the library of theQueens College.Of my last visit to my sister I treasure most happy recollections. I hadnot beenable to leave my invalid mother for many years; bet immediatelyafter her death, and by her previous express wish, I hastened to London. -My sister was looking forward eagerly to the Patricks Day Concert atthe Albert Hall, where some of her adaptations of Folk Music were to beproduced. Her last birthday was oh the day before that concert, and LadyMaude Warrender, sister of the President of the Irish Folk Song So&iety,who was practising two songs with her, brightened the room with a gift offlowers. Attendance at the Concert was vicibly an eflbrt. Mrs. OhambersBunten, who had called in the morning with ai xious inquiries as to herfitness to attend, kindly and gravely warned me that she and others felt surethat her death was near, but the effort i ad no apparent ill efiet t the tinie,though it revealed to me her incurable weakness, which was not at allevident, for her bright conversatioii and unfailing pleasure in music andsociety carrced it off.Mr. Bernard Shaw in one of his plays writes cynically as Irish as anAlbert Hall Concert. But this was a really Irish one. Fresh from Belfast,I heard with some bewilderment the massed Guards bands wearing Englandscruel red, and yet playing tunes and songs that people are now sent to gaolfor singing in Ireland. A song found during my sisters delightful visit toWaterford was beautifully sung by Mr. Gordon Oleather, with the words Ihad written by command very queerly altered by the publishers man, ormy sister, or someone who knew more about music than poetry. Mr. Gravesswords were altered, too, to make an ancient battle-song seem to refer to amodern war. Then there were songs by Hamilton Harty and Herbert Hughes.It was just a real Folk Song Concert on a big scale;, and my sisters delightwas increased by the presence of friends from Irelaiid, who came next da tocongratulate her, and who brought home to her father an account of thegreat event.Mrs. Draper, the Assistant Secretary and Treasurer of the Irish Folk SongSociety, had written telling her of the Folk Song Societys Medal, which was inpreparation for the Feis Ceoil; and the designs were to have been inspectedon Sunday, the day, as it came about, which followed her death bnMaioh 25th. She had written herself asking Mrs. Draper. to have tea with( xi )us; and almost every day of that week she played for me my favouritesamong the old airs, and. told me of the kindness and attention of her friendsin the Folk Song Society, ,who had done so much towards encouraging herlifes aim, and giving her happiness gnd pleasure to the end.ALIcS MILLIGAN.Let me add to Miss Milhigans memories of her.sister a few memories ofmy own.The Folk Song Society from which our Irish Folk Song Society sprangwas originated as the result of a conversation between our chairman,Mr. Plunket Greene, niy brother Charles, the literary and musical critic,and myself, and was started in the old rooms of the Irish Literary Society inAdelphi Terrace, at a meeting attended by the leading Folk Song cohlectoinand experts of the day, Mr. Fuller Maitland, Miss Lucy Broadwood,Mrs. Gomme, now Lady Gomme, Mr. W. H. Gill, and others. Its movingspirit and Secretary was Miss Kate Lee, a member of the Irish LiterarySociety, and one of its musical benefactors, for she gave us a piano for ouruse. That Folk Song Society was intended to embrace the four n tions, andEnglish, Irish, Scotch, and Welsh Vice-Presidents were appointed to markthe Union. But the hands of the Society became too full to maintain aUnionist Government, and Mrs. Mihligan Fox, though a Unionist in politics,led a Home Rule secession for Irish Folk Song, and hence our present Society.A similar movement took place on the part of the Welsh, which I amafraid I also aided and abetted. And now the Scotch Gaels, led by suchenthusiasts as Mrs. Kennedy Fraser, are also acting on independent lines.Well, there is room and for a, and we now are an empire of British andIrish, and I may add colonial, Folk Song, with enough to satisfy the wantsof all the devotees of this delightful branch of niu ic.I havewandered for a moment from my memories of Charlotte MilliganFox, but only to prove that she ,was the first to show the value of a greaterspecialization in our Irish Folk Song Movement. Her departure in anentirely Irish direction dave a great impulse to the promotion of our nativemusic. She was so indefatigable in the pursuit of what, as her sister writes,became such a passion to her that she spared nothing for ittime, money,health, and life itself. She traversed the North and South of Ireland withpencil an music paper, and then with her phonograph, taking down Irishairs and Irish words, colloguing in her delightfully natural way with highand low, farmer and beggar-woman, piper, harper, fiddler, and ballad-singer,1 1916.S
issue Number
16
page Number
6
periodical Author
[Periodical]
issue Publication Date
1967-01-01T00:00:00
allowedRoles
anonymous,guest,friend,member