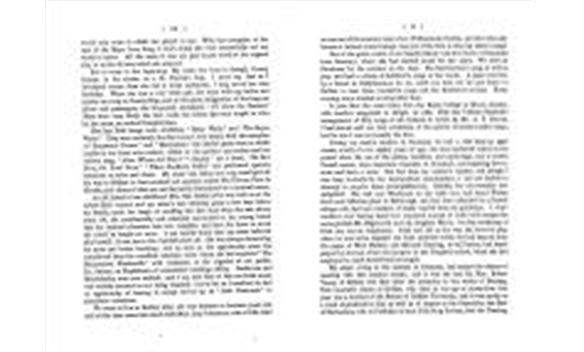 Previous | Next
Journal of the Irish Folk Song Society, Volume 3, Issue 16, Page 5
12 views
Favourite | Share | Feedback
periodical Publisher
Irish Folk Song Society
periodical Editor
[Periodical]
periodical Title
Journal of the Irish Folk Song Society
volume Number
3
issue Content
( viii )would only write it whilst she played to me. With the exception of thecase of the Mayo Love Song, I dont think she ever successfully set mywords to music. All the same, it was my part to put words to her originalair8, or to the old airs which she adapted.But to come to the beginning. My sister was born in Omagh, CountyTyrone, in the sixties, on a St. Patricks Day. I must say that as Ideveloped sooner than she did in Irish sentiment, I long envied her thatbirthday. When she was a very little girl, she went with my father andmother on a trip to County Sligo, and, to tbe great indignation of the long-cardriver and passengers, she frequently exclaimed, 1,11 shoot the Fenians.These were very likely the first words her infant lips were taught to utterby her nurse, an ardent Orangewoinan.Her first Folk Songs were, doubtless, Perry Walls and The BoyncWater. They were certainly the first tunes I ever heard, with the exceptionof Rousseaus Dream and Martyrdom, the doleful psalm tune to whichcradles in our home were rocked; whilst in the parlour my mother and hervisitors sang, Alice, Where Art Thou? Juanita (as a duet), Oh FairDove, Oh Fond Dove, When Swallows Build, and performed operaticselections as solos and duets. My sister was taken as a very small girl allthe way to Belfast to hear musical and operatic artists like Titieiis, Ilma deMurska, and others of that era, and had early determined oil a musical career.An old friend of our childhood, Mrs. Sam Rideal (who was with us at theAlbert Hall concert and my sisters last birthday party a few days beforeher death), made her laugh at recalling the fact that when she was elevenyears old, she confidentially and solemnly announced to her young friendthat her musical education was now complete, and that she knew so muchshe could be taught no more. I can hardly think that my sister believedthis herself; it was just a bit of girlish show-off. She was always olamouringfor more and better teaching; and as 80011 as the opportunity arose wastransferred from the excellent mistress under whom she had acquired TheHarmonious Blacksmith, with variations, to the organist of our parish,Dr. Palmer, an Englishman of remarkable teaching ability. Beethoven andMendelssohn were now studied; and I am sure that at this era Irish musicwas entirely scorned as not being classical; but as far as 1 recollect we hadno opportunity of hearing it except served up as Irish Diamonds inpianoforte variations.We went to live in Belfast when she was thirteen or fourteen years old,and at this time came into touch with Miss Lucy Jobmistone, who a little later( ix )on was one of the amateur stars of our Philharmonic Society, and who when.shebecame a trained concert singer was one of the first to sing my sisters songs.One of the great events of our family history was the return of Charlottefrom Germany, where she had studied music for two years. We were atBundoran for the summer at the time. She had learned to sing as well asplay, and had a volume of Schuberts songs in her trunk, A piano was lentby a friend in Bailyshannon, for we could not wait till we got home toBelfast to hear those wonderful songs and the Beethoven sonatas. Everyevening was a musical evening after that,A year later she came home from the Royal College of Music, London,with another song-book to delight us with. This was Villiers Stanfordsarrangement of fifty songs of old Irelamid, to words by Mr. A. P. Graves,I had almost said our first revelation of the glories of ancient native song;but for me it was not exactly the first.During my sisters absence in Germany, we had a visit from an agedcousin, a lady of over eighty years of age, who had conducted school at theperiod when the use of the globes, heraldry, and mythology, and a correctFrench accent, were important branches of education, not forgetting how toenter and leave a room. She had been my mothers teacher, and though Iwas deep in study for the Intermediate examinations, 1 did not disdain toattempt to acquire these accomplishments. Besides, her conversation wasdelightful. She had met Thackeray on his Irish tour, had heard WalterScott and Jefferies plead in Edinburgh, and had been schooled by a Frenchrefugee who had seen baskets of heads carried from the guillotine. I dontrecollect ever having heard her commend anyone of Irish birth except theaccomplished Mr. Edgeworth and his daughter Maria; but her rendering ofIrish airs was an inspiration. Frail and old as she was, she loved to playwhen we were alone together the Irish nielodies which she had learned fro mthe pages of Eliot Hudson and Edward Bunting, or still better, had heardplayed by time last of the old harpers of the Drogheda school, whom she hademployed to teach herself and her pupils.My sister, owing to her absence in Germany, had missed the chance ofmeeting with this musical cousin; and it was the late Rt. Hon. RobertYoung of Belfast who first drew her attention to the works of Bunting.This venerable citizen of Belfast, who died at the age of ninety-four thisyear, was a member of the Senate of Belfast University, and it was partly asa mark of gratitude to him, as wall as of respect to the Chancellor, the Earlof Shaftesbury, who is President of your Folk Song Society, that the BuntingIF
issue Number
16
page Number
5
periodical Author
[Periodical]
issue Publication Date
1967-01-01T00:00:00
allowedRoles
anonymous,guest,friend,member