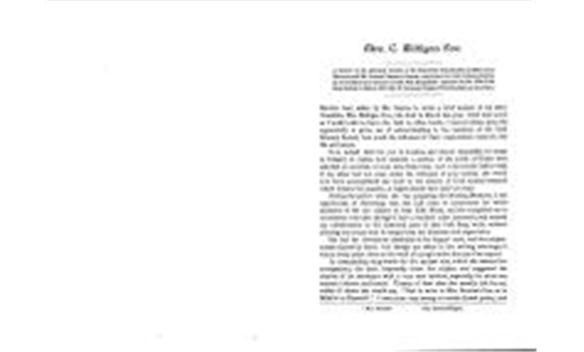 Previous | Next
Journal of the Irish Folk Song Society, Volume 3, Issue 16, Page 4
8 views
Favourite | Share | Feedback
periodical Publisher
Irish Folk Song Society
periodical Editor
[Periodical]
periodical Title
Journal of the Irish Folk Song Society
volume Number
3
issue Content
(DLZSk C. (1)illigcrn I ox.A Memoir of the principal founder of the Irish Folk Song Society, by Miss ALICEMmLIOAN and Ma. ALFRED Paaoxv&r. Gaivas, read before the Irish Literary Societyby its President at a Concert of Irish Folk Song Music organized by the Ii sh Folk- Sang Society in March, 1917, MR. H. PLUNKET Gazzaa (Vice-President) in the Chair.HAVING been asked by Mr. Graves to write a brief memoir of my sisterCharlotte, Mrs. Milligan Fox, who died in March last year, I feel that, muchas I would wish to leave the task to other hands, I cannot refuse, since theopportunity is given me of acknowledging to the members of tbp IrishLiterary Society how much the influence of their organization meant to herlife and career.It is, indeed, hard for you in London, and almost impossible for manyin Ireland, to realize how entirely a section of the youth of Ulster wereschooled on un-Irish, or even anti-Irish, lines; and 1 can hardly believe thatif my sister had not come under the influence of your society, she wouldever have accomplished the work in the domain of Irish musical researchwhich became her passionI might almost have said her craze.During the period when she was preparing the Bunting Memoirs, I hadopportunity of discerning that she had come to concentrate her wholeattention on the one subject of Irish Folk Music, and she compelled me toconcentrate mine also (though I had a hundred other interests), and securedmy collaboration in the historical part of that Folk Song work, withoutallowing me at any time to escape from her direction and supervision.She had her documents absolutely at her fingers ends, and the subject-matter almost by heart; and though my share in the writing was large, itwas at every point done as the work of a pupil under the eye of an expert.In commanding song-words for the ancient airs, which she selected forarrangement, she most frequently chose the subject, and suggested themanner of its treatment with a very sure instinct, especially for what wasancient, historic, and bardic. Themes of that class she usually left for me,whilst of others she would say, That is more in Mi-s. Buntens line, or inEdith& or Ernests 2 . I was never very strong at concise lyrical poetry,and1 lIre. Wheeler. 2 Mr. Ernest Milligan.
issue Number
16
page Number
4
periodical Author
[Periodical]
issue Publication Date
1967-01-01T00:00:00
allowedRoles
anonymous,guest,friend,member