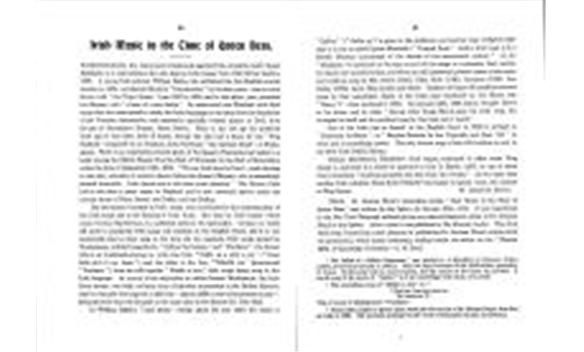 Previous | Next
Journal of the Irish Folk Song Society, Volume 2, Issue 13, Page 11
2 views
Favourite | Share | Feedback
periodical Publisher
Irish Folk Song Society
periodical Editor
[Periodical]
periodical Title
Journal of the Irish Folk Song Society
volume Number
2
issue Content
2021Irisb music in the Cime of Queen Bess.NOTWITHSTANDING the many penal enactments against Irish minstrels under QueenElizabeth, it is extraordinary that she kept an Irish harper from 1590 till her death in1603. A young Irish scholar, William Bathe, who published the first English musicaltreatise in 1584antedating Morleys Introduction by thirteen yearswas in muchfavour with the Virgin Queen from 1587 to 1590, and in the latter year presentedher Majesty with a harp of a new device. So enamoured was Elizabeth with Irishsongs that she commenced to study the Irish language, as we learn from the dispatchesof the Venetian Ambassador, and mastered a specially written primer of Irish, fromthe pen of Christopher Nugent, Baron Delvin. Even in her old age she preferredIrish jigs to any other form of dance, though she also had a fancy for the FrogGalliard, composed by an Irishman, John Dowland, the intrinsic friend of Shake-speare. There is an interesting account given of f he Queens Terpeichorcan tastes in aletter among the Talbot Papers from the Earl of Worcester to the Earl of Shrewsburyunder the date of September 19th, 1602: We are frolic here in Court; much dancingin the privy chamber of country dances before the Queens Majesty, who is exceedinglypleased therewith. Irish dances are at this time most pleasing. The Riunce Fadahad at this time a great vogue in England, and it was variously known under thecorrupt forms of Furry Dance, the Foddy, and the Fading.But the Queens interest in Irish music was not limited to the understanding ofthe Irish songs and to the dancing of Irish tunes. She kept an Irish harper whosename, Cormac MacDermot, is a sufficient index to his nationality. Cormac no doubtdid much to popularise Irish songs and melodies at the English Court, and it is notimprobable that he often sang to the harp the two exquisite Irish songs quoted byShakespeare, entitled respectively, Callino Cacturame, and Duedame: the formertitle is an Anglicised attempt to write the Irish Cailin og a stuir a me (Dearlittle girl of my heart ), and the latter is the line, Tiofaidh me (pronouncedDuckanie ), from the still popular Eibblin a ruin, both songs being sung in theIrish language. As a proof of the estimation in which Cormac MacDermot, the IrishCourt harper, was held, we learn from a Cottonian manuscript in the British Museumthat he was paid the large fee of 46 lOs.almost 400 a year of our present moneybeing 6 more than the fee paid at the same time to the famous Dr. John Bull.In William Ballets Lute Book, written about the year 1595, the music ofCallino ( Cailin og ) is given in lute tablature, and another copy of slightly laterdate is in the so-called Queen Elizabeths Virginal Book; while a third copy is in aBritish Museum manuscript of the decade of the seventeenth century. 2 As forDucdame, it continued to be sung on and off the stage in a phonetic Irish versionfor almost two hundred years, and there are still preserved printed copies of the musicand words as sung by Mrs. Storer (1727), Kitty Olive (1740), Tenducci (1760), VanCatley (1769), Leoni, Miss Linley and others. Readers of Pepys will recall the accountgiven by that remarkable diarisi of the Irish song introduced by Joe Harris intoHenry V. when produced in 1666. On January 24th, 1667, Pepys brought Harristo his house, and he adds, Among other things Harris sang his Irish song, thestrangest in itself and the prettiest sung by him that ever I heard.One of the Irish jigs as danced at the English Court in 1602 is printed inParthenia Inviolata; or Mayden Musicke for the Virginalls and Bass Viol in1614, and is exceedingly pretty. The only known copy of this 1614 edition is now inthe I ew York Public Library. -Cormac MacDermot, Elizabeths Irish harper, continued in office under KingJames I., and there is a record of payment to him in March, 1607, as one of thoseCourt musicians receiving annuities and fees from the Crown. At the same dateanother Irish minstrel, Donal dubd OCahill, 8 was harper to Queen Anne, the consortof King James. W. GRATTAN FLOOD.[ NOTE. Dr. Grattan Floods interesting article, Irish Music in the Time ofQueen Bess, was written for the Sphere for January 25th, 1913. It was reproducedin the New York Telegraph without giving any acknowledgments either to Dr. GrattanFlood or the Sphere. After a time it was published in The Musical Leader. The IrishFolk Song Journal has much pleasure in publishing Dr. Grattan Floods article (withhis permission), which makes interesting reading beside the article on the MusicalMSS. of Cambridge University.C. M. Fox.11 The ballad of Callino Casturame, was printed in A Handfufl of Pleasant Dilites(1584), it had been licensed in 1581-2. Only one copy is known of the 1584 edition, printed byTh Jones. In this song book no music is given, but the names of the tunes are printed. Afourth copy of the music of Callino is in the Cambridge Lute Book, circa 1600.3 The concluding verse of Eibblin a ruin isThca me, tuca me, tuca meSui ouna me, 0.This of course is Shakespeares Duedame.Donal dubh, harper to Queen Anne, went into the service of Sir Richard Boyle, first Earl4 Cork, in 620. is suocessQr as harper to the Court of Denm rk was also an Irishman.F
issue Number
13
page Number
11
periodical Author
[Periodical]
issue Publication Date
1967-01-01T00:00:00
allowedRoles
anonymous,guest,friend,member