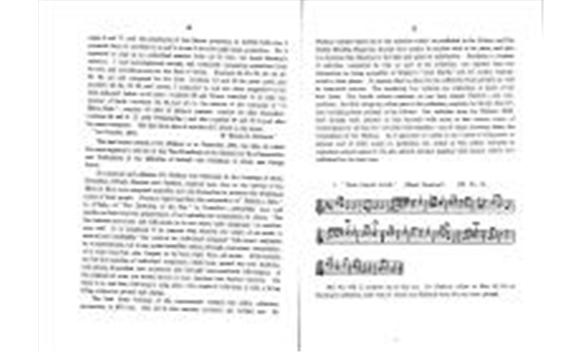 Previous | Next
Journal of the Irish Folk Song Society, Volume 2, Issue 13, Page 6
2 views
Favourite | Share | Feedback
periodical Publisher
Irish Folk Song Society
periodical Editor
[Periodical]
periodical Title
Journal of the Irish Folk Song Society
volume Number
2
issue Content
1011pages 6 and 7); and the proprietors of the Citizen proposing to publish Irish airs, Iprepared lines for numbers 3, 4, and 9, to see if the airs might pass as genuine. No. 4appeared to pass as an undoubted ancient Irish air (I have not heard Buntingsopinion). I had encouragement enough, and continued composing, soriietimes linesfor airs, and sometimes airs for the lines of others. Numbers 22, 30, 39, 46, 48, 44,53, 63, are airs composed for the lines; numbers 18 and 50 (in great part), alsonumbers 28, 34, 47, 52, and others,I composed to suit the ideas suggested by theIrish (selected before as a) name; numbers 26 and 62 are intended to be after themanner of Scott; numbers 32, 33, and 45, in the manner of the composer of 0Maire dilish; number 47 after 0. Cahans manner; number 55 after Connallon;numbers 64 and 6- C?] after OOearbaflan; and also numbers 67 and 70 in part afterthe same composer. The last three bars of number 49 I heard in the street.1st October, 1842. H ENRICUS HUDSON.The last known record of Dr. Hudson is in December, 1851, the date at whichhis name appears in the list of the Vice-Presidents of the Society for the Preservationand Publication of the Melodies of Irelandthe President of which was GeorgePetrie.As composer and collector, Dr. Hudson was following in the footsteps of Scott,Connallon, ODaIy, Carolan, and Jackson, inspired men who, in the service of theMuse of Eire, now composed melodies, now set themselves to preserve the traditionalmusic of their people. Common report ascribes the composition of Eibhlln a Rfiinto ODaly, of The Dawning of the Day to Oonnaflon; probability may wellascribe to their kind the preservation, if not actually the composition of others. Theline between art-music and folk-music is, in one sense, quite imaginary; in another,very real. It is imaginary if we assume that, whereas the origin of art-music isnatural and intelligiblethe work of an individual composerfo1k.rn gj 0 originatesby a supernatural not to say quite incredible means, through communal composition,or in some way that sets it apart at its very origin from art-music. Folk-melodiesare but the melodies of individual composeL s, which have passed into oral tradition,and become diversified into numerous sets through long continued folk-singing. Ifthe original air were not written down, it soon becomes lost beyond recovery. Yetthere is no real loss, folk-song is song alive; the music of folk-song is like a livingthing, subject to growth and change.The first three volumes of the manuscripts contain the entire collection,amounting to 870 ars. Not all of this number, however, are written out, Pr,Hudson omitted nearly all of the melodies which he published in the Citizen and theDublin Monthly Majazine, though he is careful to number each in its place, and givein a footnote the reference to the date and place of publication. Similarly, a numberof melodies, numbered by him as part of his collection, are omitted from themanuscript, as being accessible in Walkers Irish Bards, and, for sundry reasons,noted in their places. It appears that he drew for his collection from printed as wellas unprinted sources. The remaining two volumes are duplicates of parts of thefirst three. The fourth volume contains, as has been stated, Rudsons own com-positions; the fifth. being the oldest part of his collection, contains in full the first 111airs, including those printed in the Citizen. Ten melodies from the Hudson MSS.have already been printed in this Journalwith more or less serious errors oftranscription in, alt but twoas Irish folk-melodies; one of them, however, being thecomposition of Dr. Hudson. As in payment of a debt to the lovers of folk-music ingeneral, and of Irish music in particular, the writer of this article ventures toreproduce correct copies of the airs already printed, together with certain others nowpublished for the first time.1. iRois I3EAGH DUBU. (Black Rosebud.)I IMS. No. 14.0 -I - 1 41 Jj lJ n Jj T LLrJ Tj 1 rr j i j J j i1% Iii NsuMS. No. 786 is another set of this. air. Dr. Hudson refers to Nos. 18, 19, ofBuntings collection, both sets of which are different from the one here print d.p
issue Number
13
page Number
6
periodical Author
[Periodical]
issue Publication Date
1967-01-01T00:00:00
allowedRoles
anonymous,guest,friend,member