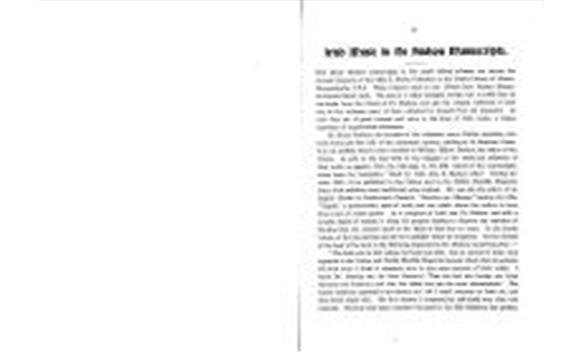 Previous | Next
Journal of the Irish Folk Song Society, Volume 2, Issue 13, Page 5
4 views
Favourite | Share | Feedback
periodical Publisher
Irish Folk Song Society
periodical Editor
[Periodical]
periodical Title
Journal of the Irish Folk Song Society
volume Number
2
issue Content
9Irish music In the hudson manuscripts.THE Henry Hudson manuscripts, in five small oblong volumes, are among thechoicest treasures of the Allen A. Brown Collection in the Public Library of Boston,Massachusetts, U.S.A. These volumes came to the Library from Nassau Massey,89 Patrick Street, Cork. He says in a letter (undated, written late in 1902) that hehas books from the library of Dr. Hudson, and also his original collection of Irishairs, in five volumes, many of them collected by himself from the peasantry. Assuch they are of great interest and value to the lover of Irish music; a uniquereposFtory of unpublished collectanea.Dr. Henry Hudson, the compiler of the collection, was a Dublin physician, wholived during the first half of the nineteenth century, residing at 24 Stephens Green.It is not unlikely that he was a brother to William Elliott Hudson, the editor of theCitizen. As early as the year 1812 he was engaged in the study and collection ofIrish music, as appears from the title-page to the fifth volume of the manuscripts,which bears the inscription, Book for Irish Airs, H. Hudson, 1812. During theyears 18413, he published in the Citizen and in the Dublin Monthly Magazinemany Irish melodies, some traditional, some original. He was also the author of anEnglish libretto to Beethovens Oratorio, Christus am Olberge, bearing the title,Engedi, a praiseworthy piece of work, and one which shows the author to havebeen a man of varied genius. As a composer of Irish airs, Dr. Hudson met with anotable degree of success, it being his purpose thereby to disprove the assertion ofBunting that the creative spirit of the Muse of Eire was no more. In the fourthvolume of the manuscripts are the 113 melodies which he composed. On the fly-leafat the back of the book is the following statement by Dr. Hudson concerning them :The Irish airs in this volume (or book) are mine; but, as several of them haveappeared in the Citizen and Dublin Monthly Magazine (among others that are genEineold Irish airs), I think it necessary here to give some account of their origin. Iheard Mr. Bunting say (at John Bartons), That the last airs having any Irishcharacter are Jacksons, and that the oldest airs are the most characteristic. Theformer assertion appeared to me absurd, as I felt I could compose an Irish air, andthat others might also. The first sixteen I composed (as self-trials) soon after thisoccurred. Bunting made same assertion (in print) in his (3d) Collection (see preface,F
issue Number
13
page Number
5
periodical Author
[Periodical]
issue Publication Date
1967-01-01T00:00:00
allowedRoles
anonymous,guest,friend,member