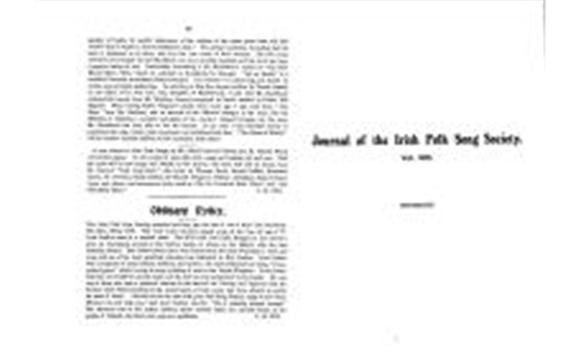 Previous | Next
Journal of the Irish Folk Song Society, Volume 2, Issue 13, Page 1
3 views
Favourite | Share | Feedback
periodical Publisher
Irish Folk Song Society
periodical Editor
[Periodical]
periodical Title
Journal of the Irish Folk Song Society
volume Number
2
issue Content
86speaker of Gaelic, by careful observance of the rhythm of the notes given here, will findhimself able to acquire a correct traditional style. The preface concludes by stating that thebook is dedicated to all those who love the true music of their country. The folk songscollected and arranged by Carl Hardebeck are most carefully handled, and th work has beena genuine labour of love. Particularly interesting is Mr. Hardebecks version of The Red-Haired Mans Wife, which he collected in Gortahork, Co. Donegal. Sal og Ruadh is abeautiul Oonnacht lamentation finely arranged. An Ciorsire is a jolly song, and should bewidely sung at Gaelic gatherings. In referring to that fine lament written by Tomas Costelloon the death of his true love, Una, daughter of MacDermotb, I note that Mr. Hardebeckcollected the lament from Mr. Waidron, formerly employed as Gaelic teacher by Father MatMaguire. When visiting Father l Iaguires parish three years ago, I also took down tlnaBhan from Mr. Waldron; and on account of the different changes in the time, also thedifficulty of obtaining a suitable translation of the words, I delayed bringing out the song.Mr. Hardebeck has been able to bar the lament. In my case I had intended merely topunctuate the song, which, when composed, was unfettered and free. The Gems of Melodywill be another valuable addition to the musicians Irish library Journal of the Irish Folk Song Society.A new volume of Irish Folk Songs, by Mr. Alfred Perceval Graves and Dr. Charles Wood,will shortly appear. It will consist of some fifty Irish songs and ballads, old and new. Half Vol. XIII.the lyrics will be new songs and ballads by Mr. Graves; the other half will be drawn fromMr. Gravess Irish Sung Book the lyrics by Thomas Davis, Gerald Griffith, KatharineTynan, Dr, Drennan, Emily Hickey, Sir Samuel Ferguson, William Allingham, Robert DwyerJoyce, and others; and anonymous lyrics such as The Co. Limerick Buck Hunt and TheKilruddery Hunt. C. M. FOX.COPYRIGHT.Obituarp__I otice.THE Irish Folk Song Society sustained not long ago the loss of one of their Vice-Presidents,The Hon. Otway Cuffe. This week LORD CROFTON passed away, at the ripe old age of 77.Lord Crofton came of a musical stock. The Wild Irish Girl (Lady Morgan) in her memoirsgives an interesting account of the Crofton family, to whom, on her fathers side, she wasdistantly related. The Crofton family have been honoured by the Bard OCarolan in verse andsong, and one of his most sparkling planxties was dedicated to Mrs. Crofton. Lord Croftonwas a composer of many chants, anthems, and hymns; his most celebrated one being, Peace.perfect peace, which. is sung at every wedding of note in the United Kingdom. Lord Crof tonbad been an invalid for several years, and his end was not unexpected by his family. He wasone of those who took a profound interest in the start of our Society, and deplored that theSociety which Petrie founded for the preservation of Irish music had been allowed to perishfor want of funds. Should this be the case with your Folk Song Society, apply to the PrimeMinirter; he will help you, said Lord Crof ton merrily; He is certainly musical enough.The reference was to Mr. Arthur Balfour, whose musical tastes are scarcely known to theveople of Ireland, who know him only as a politician. C. M. FOX.F
issue Number
13
page Number
1
periodical Author
[Periodical]
issue Publication Date
1967-01-01T00:00:00
allowedRoles
anonymous,guest,friend,member