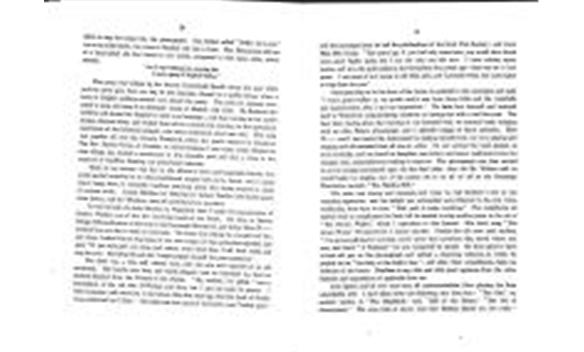 Previous | Next
Journal of the Irish Folk Song Society, Volume 2, Issue 12, Page 6
15 views
Favourite | Share | Feedback
periodical Publisher
Irish Folk Song Society
periodical Editor
[Periodical]
periodical Title
Journal of the Irish Folk Song Society
volume Number
2
issue Content
11effort to sing her songs into the phonograph. One ballad called Nellie my Love,was sung alternately, one verse in English and one in Irish. Mrs. Macnamara told meof a long ballad she had heard in her youth, composed in this same style, whichstarted,As I was walking one evening fairI met a gang of English blades.This poem was written by the famous Donnehadh Buadh about the year l74 ,and the story goes that one day he was enjoying himself in a public house, when abody of English soldiers entered and joined the party. The poet, by request, com-posed a song, and sang it in alternate verses of English and Irish. He flattered thesoldiers and lauded the English in their own language; and then turning to his nativetongue, damned them, and wished them all in a certain hot country, to the uproariousmerriment of the Irishmen present, who alone understood what was said. This songwas popular all over the County Waterford, where the poets memory is treasured.The Rev. Father Power, of Portlaw, to whose kindness I owe many songs collected inthat village, has erected a monumeiit to this versatile poet, and also a cross to thememory of Geoffrey Keating, our great Irish historian.Much of my success was due to the efforts of kind and hospitable friends, whomade special enquiries as to where traditional singers were to be found; and I spentmany happy days, in beautiful weather, motoring about this lovely country in questof ancient music. Joseph Ifalligan (of Ballybawn), F obert Weldon (the Gaelic poet),John Quinn, and the Whelans, were all contributors to my store.It was through the lady librarian in Waterford that I made the acquaintan ofRobert Weldon, one of the few surviving bards of the South. He lives at i IahonBridge, Kilznacthomas at the foot of the Comeragh Mountains, and hither Miss Wmotored me one day to seek an interview. We found him sitting by a bright turf fire;and when I asked him to sing some of his own songs, he was somewhat agitated, andsaid, If you only give me time and return some other day, I will both recite andsing for you: but being ill and old, I must prepare myself for your questions.The bard was a thin, tall, refined man, with the airs and manners of an oldaristocrat. His hands were long and finely shaped; and he informed me that heclaimed descent from the Princes of the Decies. My mother, he added, was adescendant of the old clan OWhelan, and from her I got my taste for poetry. Iwell remember with what joy I read about fifty-five years ago the first book of Gaelicverse published by ODaly. He explained that most of his books were locked past,and that amongst them he had the publications of the Irish Text Society; and knewMiss Ella Young. Ten years ago, if you had only come here, you would have foundsome good Gaelic poets, but I am the only one left now. I have written manyjoems, and won the gold medal at the Oireachtas four years agothat was for a lovepoem. I set most of my verses to old Irish airs, and I promise when you come againto sing them for you.Accompanying us to the door of the house, he pointed to the mountains and said,I was a great walker in my youth, and it was from those hills, and the waterfallsand sunsets there, that I got my inspiration. We bade him farewell and motoredback to Waterford, congratulating ourselves on having met with a real live poet. Tendays later, having given due warning of our intended visit, we motored back, bringingwith us a fine Edison phonograph and a plentiful supply of blank cylinders. MissW and I had tested the instrument by making records from our own playing andsinging, and felt satisfied that all was in order. On our arrival the bard greeted usmost cordially, and we found his daughter, son-in-law, and some neighbours from thecottages near, assembled and waiting to meet us. The phonograph was then carriedup to the cottage and placed upon the fine deal table; then old Mr. Weldon said hewould begin by singing one of his poems set to an air as old as the ComeraghMountains, namely, The Heathy Hifi.His voice was strong and resonant, and when he had finished I put on therepeating apparatus; and his delight was unbounded as he listened to his own voice,exclaiming from time to time, Well, well, it beats anything. The neighbours allstarted then to compliment the bard, till he started to sing another poem to the air ofThe Brown Wallet, which I reproduce in this Journal. His third song, TheGreen Wood, Ill reserve for a future number. Finally the old man said, smiling,Ive got something for you that youll never find anywhere else, travel where youmay, and thats A Welcome for you, composed by myself. He then asked to havea fresh roll put on the phonograph, and recited a charming welcome, in which hegreeted me as the lady of the bright face; and after other compliments, bade mewelcome to his house. Needless to say, this met with great applause from the otherlisteners and expressions of gratitude from me.John Quinn and his two sons were all instrumentalists, John playing the fluteremarkably well. I have taken down the following airs from him: The Girl, anancient version of The Blackbird, reel, Hill of the Briars, The Job ofJourneyman. His sons, both of whom were fine fiddlers, played me two reelsV
issue Number
12
page Number
6
periodical Author
[Periodical]
issue Publication Date
1967-01-01T00:00:00
allowedRoles
anonymous,guest,friend,member