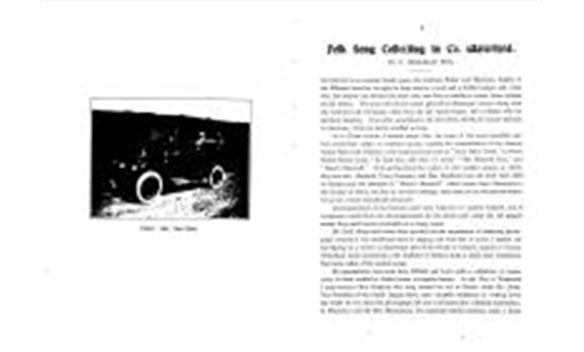 Previous | Next
Journal of the Irish Folk Song Society, Volume 2, Issue 12, Page 5
8 views
Favourite | Share | Feedback
periodical Publisher
Irish Folk Song Society
periodical Editor
[Periodical]
periodical Title
Journal of the Irish Folk Song Society
volume Number
2
issue Content
9folk Song Collecting in Co. 4tlaterlord.B C. MILLIGAN FOX.ACCORDING to an ancient Gaelic poem, the brothers Heber and Heremon, leaders ofthe Milesian invasion, brought in their retinue a poet and a skilled harper, and whenthey had settled and divided the land, they cast lots, to decide to whom these artistesshould belong. The poet with all his varied gifts fell to Heremons share, along withthe northern half of Ireland, while Una, the fair haired harper, fell to Heber with hissonthern kingdom. Ever after, according to the old writer, the North was pre-eminentin literature, while the South excelled in song.As an Ulster woman, I cannot accept tius, for some of the most beautiful airshave owed their origin to northern genius, notably the compositions of the famousharper Rory Dali OCahan, who composed such airs as Rory Dalls Purth, to whichRobert Burns wrote, Ac fond kiss ai d then we sever, The Minstrel Boy, andEmers Farewell. (I am giving them the names of the modern poems to whichthey are set) Stanford, Percy Grainger, and Mrs. Needham have all tried their skillin bringing out the beauties of Emcrs Farewell, which comes from Limavady inthe County of Derry, but fine as are their settings, none seem to me the genuine framefor an air of such remarkable character.Accompaniments in the German stylo were unknown in ancient Ireland, and ifcomposers would think out accompaniments for the bardic part using the old gappedscales, they could arrive eventually at a happy mean.Mr. Cecil Sharp and others have pointed out the importance of obtaining phono-graph records of the traditional style of singing, and with this in mind I started outlast Spring on a visit to a picturesque part of the South of Ireland, namely to CountyWaterford, where according to the tradition of Hebers luck, I might have expected tofind many relics of the ancient songs.My expectations were more than fulfilled, and I got quite a collection of songs,many of them wedded to Gaelic poems of singular beauty. In the City of WaterfordI came across a Mrs. Ro siter, who sang several for me in Gaelic, while Mr. Brett,Vice-President of the Gaelic League there, gave valuable assistance in writing downthe words for me, since the phonograph did not in all cases give a distinct enunciation.In Tramore I met old Mrs. Macnamara, who although nearly toothless made a braveOVER THE GALTEES.SF
issue Number
12
page Number
5
periodical Author
[Periodical]
issue Publication Date
1967-01-01T00:00:00
allowedRoles
anonymous,guest,friend,member