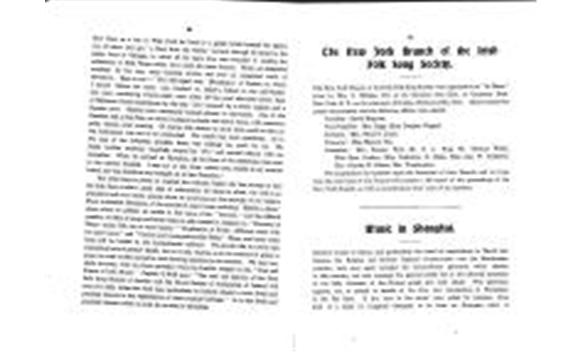 Previous | Next
Journal of the Irish Folk Song Society, Volume 2, Issue 9, Page 12
6 views
Favourite | Share | Feedback
periodical Publisher
Irish Folk Song Society
periodical Editor
[Periodical]
periodical Title
Journal of the Irish Folk Song Society
volume Number
2
issue Content
22time when as a boy in West Cork he lived in a parish which boasted two pipers,one of whom had got a blast from the fairies, onward through his career in thepolice force of Chicago, in which all his spare time was occupied in making thecollections of Folk Music which have made his name famous. There are delightfulincidents by the way, some amusing stories, and even an occasional touch ofadventure. Here is one : The full-rigged ship Minnehaha, of Boston, on whichI served before the mast, was wrecked on Bakers Island, in the mid-Pacific.Our crew, numbering twentyeight were taken off the coral islet after eleven daysof Robinson Crusoe experien by the brig Zor, manned by a white captain and aKanaka crew. Ratious were necessarily limited, almost to starvation. One of theKanakas had a fine flute, on which he played a simple one-strain hymn, with consciouspride, almost every evening. Of oourse, this chance to show what could be done onthe instrument was not to be overlooked. The result was most gratifying. As inthe case of the Arkansa 5 traveller there was nothing too good for me. Mydusky brother musician cheerfully shared his Poi and canned salmon with methereafter When we arrived at Honolulu, all but three of the castaways were sentto the marine hospital. I was one of the three robust oncs, thanks to my musicalfriend, and was therefore sent straight on to San Francj8co.But while there is plenty to interest the ordinary reader who has courage to facethe title, there is also a great deal of information for those to whom the title is anattraction and not a scare, among whom we may hope are the majority of our readers.There is detailed discussion of the sources of many tunes, including Eibhljn a Ruin,about which we publish an article in this issue of the Journal; and the difficultquestion of titles of songs and dance tunes is ably treated in chapters on Diversity ofTitles tunes with one or more names, Duplication of Titles_djffercnt tunes withthe same name, and Curious and incomprehensible Titles. These, and many otherhints will be helpful to the inexperien j colle(Jtor. We should like to review thisinteresting book at greater length, but as it only reaches us at the moment of going topress we must content ourselves with drawing attention to its contents. We may conyelude, however, with one short quotation from the forcible chapter on the Past andFuture of Irish Music. Captain ONeill says: The zeal and labours of the IrishFolk Song Society of London and the Royal Society of Antiqusrj of Ireland willcount for little unless the Irish race, particularly in Ireland, display a more lively andpractical interest in the regeneratjo of their musical heritage. It is this lively andpractical interest which it must be our aim to stimulate.23C e Pew York Brancb of 11e lrIslFolk Song Socletp.THE New York Branch of the Irish Folk Song Society was organised at an At Homegiven by Mrs. C. Milligan Fox at the National Arts Club, 14 Gramercy Park,New York, N. Y., on the afternoon of Sunday, February 19th, 1911. About twenty-fiveguests were present, and the following officers were elected:President: David Bispham.Vice-President: Mrs. Riggs (Kate Douglas Wiggin).Secretary: Mrs. Floyd S. Leach.Treasurer: Miss Eleanor Cox.Committee: Mrs. Simeon Ford, Mr. F. A. King, Mr. Thomas Walsh,Miss Kate Condon, Miss Katherine D. Blake, Miss Jean W. Underhill,Mrs. Charles H. Ditson, Mrs. Worthington.We congratulate the members upon the formation of their Branch, and we hopethat the next issue of the Journal will contain a full report of the proceedings of theNew York Branch, as well as contributions from some of its members.music in Sbanghai.RECENT events in China, and particularly the trend of negotiations in March lastbetween the Russian and Chinese Imperial Governments over the Manchurianquestion, have once again revealed the extraordinary ignorance which obtainsin this country, not only amongst the general public but in the editorial sanctumsof the daily Journals, of the Chinese people and their affairs. This ignoranceappears, too, to extend to details of the lives and occupations of Europeansin the Far East. If the man in the street , were asked for instance, whatkind of a place he imagined Shanghai to be from an European point, ofF
issue Number
9
page Number
12
periodical Author
[Periodical]
issue Publication Date
1967-01-01T00:00:00
allowedRoles
anonymous,guest,friend,member