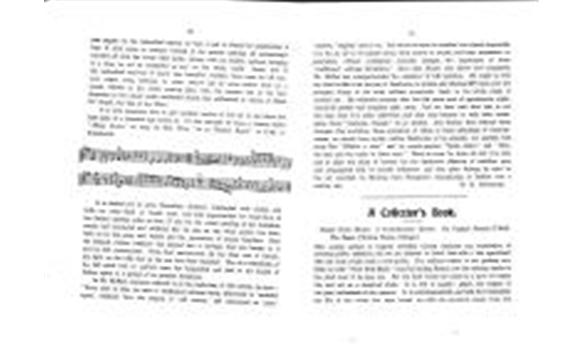 Previous | Next
Journal of the Irish Folk Song Society, Volume 2, Issue 9, Page 11
3 views
Favourite | Share | Feedback
periodical Publisher
Irish Folk Song Society
periodical Editor
[Periodical]
periodical Title
Journal of the Irish Folk Song Society
volume Number
2
issue Content
2021plea capped by the intensified version of bars 1 and 2, altered by substituting ahigh F, with notes in context, instead of the quieter opening, all enchantinglyrounded off with the lovely little motto phrase, with its ancient cadence, bringingto a close an air as wonderful as any in the whole, world. Surely this isthe undoubted survival of many less beautiful versions from some far off com-mon origin, sung, perhaps, in some remote age by some ardent lover on apurple hillside in the misty evening light, with the western sea at his feet,gleaming in the sunset under embattled clouds that sublimated in visions of fabledHi Brasil, the Isle of the Blest!It is only necessary here to give another version of this air to see where thefalse taste of a decadent age comes in. In this example we have a version calledAileen Aroon, as sung by Mrs. Olive, at ye Theatre Royal, in 1740, orthereabouts. r) , __ ___J 1 -1 I 44 4ancient, original, and so on. But when we come to consider how almost impossibleit is for an air to be passed about from mouth to mouth, and from generation togeneration, without undergoing immense changes, the importance of thesetraditional settings diminishes. Now, that dictum just shows, how completelyMr. Moffat has misapprehended the operation of folk tradition. He might as wellsay that he didnt see the use of Beethoven re-writing and altering 200 times over theprincipal theme of the most sublime symphonic finale in the whole range ofmusical art. He evidently assumes that the folk tunes were of spontaneous origin,conceived perfect and complete right away. But we have seen that this is nutthe case, that it is quite otherwise, and that they became so only after under-going those immense changes he so decries.. And further, that. without thosechanges, that evolution, those accretions of riches or those denudings of recrudes-cences, we should have to-day neither Beethoven at his greatest, nor peerless folktunes like Eibhlin a ruin, and its cousin-german Robin Adair, and Fm,the tear and the smile in thine eyes. There is room for them all, but it is onlyjust to claim the place of honour for the legitimate offspring of tradition pureand untampered with by outside infiue i ces, and that, place belongs by right tothe air recorded by Bunting from Hempsons harp-playing in Belfast over acentury ago. W. B. REYNOLDS.It is decked out in prim Handeljan fioriture, interlarded with shakes andtrills on every third or fourth note, and with opportunities for vocal show ofthe Italian operatic order at bars 17 and 18, the whole smelling of. the footlights,smoky and mannered and artificial, like its age, an age when poetry was dead,faith at its last gasp, and beauty and the joyousness of beauty forgotten. Herethe debased written tradition has entered into a heritage that was foreign to itand its dull environment From that environment all the fresh airs of heaven,the light on the hills and on the sea have been banished. The shy Wistfulness ofthe folk spirit had no portion here, but languished and died at the breath ofItalian opera in a period of its greatest decadence.In Mr. Moffats footnote, referred to at the beginning of this article, he saysFrom time to time we hear of traditional settings being discovered in secludedspots, obtained from the singing of old women, and announced as pure,H Collectors Book.(IRIsH FOLK Music: A FASCINATING HOBBY. By Captain Francis ONeill.The Began Printing House, Chicago.)THE modest preface to Captain ONeills volume disclaims any expectation ofarresting public attention, but we are inclined to think that with a less specialisedtitle the book would reach a wide public. The ordinary reader is not perhaps verylikely to order Irish Folk Music irom his lending library, but the ordinary reader isthe chief loser if he does not. For the book treats the music as a part of humanIif , and not as a detached study. It is full of people; pipers and singers ofthe past, enthusiasts of the present. rt is autobiographical, and tells how intimatelythe life of the writer has been bound up with his countrys music, from , theFF
issue Number
9
page Number
11
periodical Author
[Periodical]
issue Publication Date
1967-01-01T00:00:00
allowedRoles
anonymous,guest,friend,member