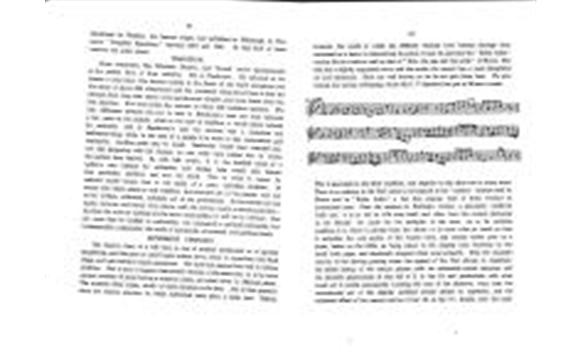 Previous | Next
Journal of the Irish Folk Song Society, Volume 2, Issue 9, Page 10
3 views
Favourite | Share | Feedback
periodical Publisher
Irish Folk Song Society
periodical Editor
[Periodical]
periodical Title
Journal of the Irish Folk Song Society
volume Number
2
issue Content
18introduce j by Braham, the famous singer, and published at Edinburgh in Bry-sonss Complete Repository between 1819 and 1821. So that both of theseversions are quite recent.TRADITIONSome composers, like Schubert, Mozart, and Purcell, arrive spontaneouslyat the perfect form of their melodies. Not so Beethoven. He laboured at histhemes a long time, (the famous melody in the finale of the ninth symphony wasthe result of about 200 alterations) and the wonderful thing about them is that theultimate form they take seems more spontaneous, simpler, and more direct than thefirst sketches. Now that is like the manner in which folk tradition operates. Theonly difference between the two is that in Beethovens case one man laboureda few years at the melody, while in the case of tradition a whole nation laboursfor centuries. And in Beethovens case the striving was a conscious anddeliberate thing, while in the case of a people it is more or less unconscious andinstinctive. Another point may be noted. Beethoven would have resen g any-one else tampering with his themes; no one could have helped him to evolvethe perfect form desired. So with folk music; it is the unaided result of anations own instinct for perfection, and foreign help would only disturbthat particular tradition and mar the result. This is what is meant bynational music_music that is the result of a pure, unbroken tradition. Ofcourse this refers solely to oral tradition, the inherited art of the people, and notto the written, cultivated, scholarly art of the professional In the written art onenation borrows and learns from others, with the curious result, a seeming paradox ._the finer the work as national art the more cosmopolitan it will be in interest. Butart must first be cradled in nationality, not necessarily a political nationality, butirLdispensably a nationality the result of community of interests and Spiritual ideals.DIFFERENT VERSIONS.The history, then, of a folk tune is one of gradual enrichment or of gradualsimplifying, and this goes on until it gets written down, when it crystalizes into fixedshape, and oral tradition ceases operations. The tune then passes from oral to writtentradition. But it may so happen that several versions of the same tune, or, to be morecorrect, versions of tunes having a common origin, are noted down in different places.The question often arises, which of these versiose is the best. And to that questionthere are various answers, in which individual taste plays a large part. Taking,19however, the words to which the different versions have become through timeassociated as a factor in determining the point, it may be said that the Robin Adairversion fits its words as well as that of Erin, the tear and the smile of Moore. Thefirst has a slightly coquettish air to suit the words, the second has a more thoughtfulair and sentiment. Both are well known, so we do not give them here. We giveinstead the version of Bunting, which Sir 0. V. Stanford has put to Moores words.l b iUII 3 i ) I rj1I )1 1 1 I1 LIJIl 1_j IThis is genuinely in the Irish tradition, and superior to the other two in many ways.There is no cadence in old Irish tunes to correspond to the perfect cadence used byMoore and in Robin Adair, a fact that stamps both of these versions asmodernised ones. Note the cadence in Buntings version, a genuinely medbevalIrish one; it is as old as folk song itself, and older than the ancient plain songof the Church. So much for the antiquity of the tune. As to its tustheticqualities, it is richer in phrase than the others; it is more vocal, so much so thatit embodies the very genius of the human voice, and sounds rather poor on apiano, better on the fiddle as being nearer to the singing tone, haunting on thesmall Irish pipes, and absolutely eloquent when sung properly. Note the exquisitesuavity of the flowing passing notes, the appeal of the first phrase in repetition,the added daring of the second phrase, with its artistically-varied sequence, andthe adorable graciousness of that fall to F, in bar 12, and particularly with whatsweet art it avoids prematurely touching the crux of the situation; then, note theconsummate art of the slightly enriched second phrase on repetition, and theenhanced effect of the second arrival of bar 12, at bar 17; finally, note the mainF
issue Number
9
page Number
10
periodical Author
[Periodical]
issue Publication Date
1967-01-01T00:00:00
allowedRoles
anonymous,guest,friend,member