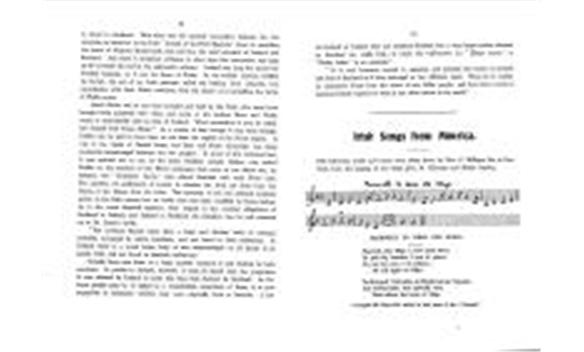 Previous | Next
Journal of the Irish Folk Song Society, Volume 2, Issue 9, Page 7
4 views
Favourite | Share | Feedback
periodical Publisher
Irish Folk Song Society
periodical Editor
[Periodical]
periodical Title
Journal of the Irish Folk Song Society
volume Number
2
issue Content
illto travel to Scotland. How close was the musical connection between the twocountries is hinted at in the Irish Annals of the Four Masters, when, in recordingthe death of Mulrony MacConnell, they call him the chief minstrel of Ireland andScotland. And there is abundant evidence to show that this connection was keptup till towards the end of the eighteenth century. Ireland was long the school forScottish harpists, as it was for those of Wales. In the twelfth century, GriffithAp Conan, the son of an Irish princess, called the leading Irish minstrels intoconsultation with their Welsh confreres, with the object of re-modelling the formsof Welsh music.North Wales was at one time invaded and held by the Irish, who must havebrought their minstrels with them, and some of the earliest Manx and Welshmusic is undoubtedly akin to that of Ireland. What connection, it may be asked,has Ireland with Norse Music? As a matter of fact, though it may seem strange,Dublin can be said to have been at one time the capital of the Norse empire. Itwas in the hands of Danish kings, and Irish and Norse minstrelsy was beingconstantly interchanged between the two peoples. In proof of this historical fact,it was pointed out to me, by the great Swedish harpist, Sjden, who visitedDublin on the occasion of the Moore centenary, that some of our oldest airs, forinstance the Cruiskeen Lawn, were almost identical with early Norse ones.The question for settlement, of course, is whether the Irish got them from theDanes, or the Dunes from the Irish. The character of the airs adduced certainlypoints to the Irish source, but no doubt they have been modified by Norse feeling.As to the much disputed question, with respect to the musical obligations ofScotland to Ireland, and Ireland to Scotland, the situation ma be well summedup in Dr. Joyces words:The Lowland Scotch tunes form a large and distinct body of nationalmelodies, composed by native musicians, and not found in Irish collections. InIreland there is a much larger body of airs acknowledged on all hands to bepurely Irish and not found in Scottish collections.Outside these airs there is a large number common to and claimed by bothcountries. In justice to Ireland, however, it must be stated that the proportionof airs claimed by Ireland is much less than that claimed by Scotland. As Dr.Joyce pithily puts it, in regard to a considerable proportion of them, it is nowimpossible to determine whether they were originally, Irish or Scottish. A few13are claimed in Ireland that are certainly Scottish, but a very large number claimedby Scotland are really Irish, of which the well-known air Eileen Aroon oiRobin Adair is an examp1e. It is not, however, correct to separate and contrast the music of Irelandand that of Scotland as if they belonged to two different races. They are in realityan emanation direct from the heart of one Celtic people; and they form a body ofnational melody superior to that of any other nation in the world.Irish Songs from Jimerica.Tim following words and tunes were taken down by Mrs. 0. Mulligan Fox in NewYork, from the singing of two Sligo girls, M. Kilcoyne and Mollie Garrity.t o ctew e 0J J.tJJ IdFAREWELL TO DEAR OLD SLIGO.Farewell, dear Sligo, I now must leave;To part thy beauties I now do grieve;Its not for ever, I do believeIll call again on Sligo.To Holywell I bid adieu, to Hazelwood an Camisto,And Tubbernaith, that splendid view,That adorns the town of Shigo.* Compare Mr. Beynolds article in this issue of the Journ j,V
issue Number
9
page Number
7
periodical Author
[Periodical]
issue Publication Date
1967-01-01T00:00:00
allowedRoles
anonymous,guest,friend,member