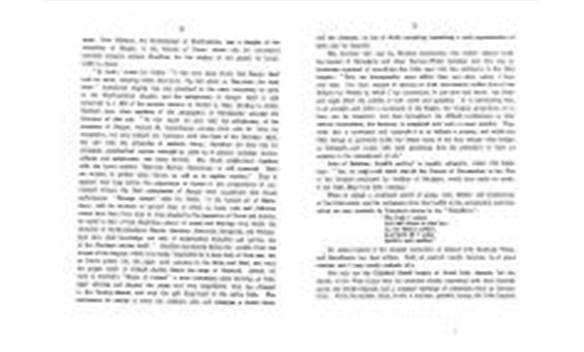 Previous | Next
Journal of the Irish Folk Song Society, Volume 2, Issue 9, Page 6
14 views
Favourite | Share | Feedback
periodical Publisher
Irish Folk Song Society
periodical Editor
[Periodical]
periodical Title
Journal of the Irish Folk Song Society
volume Number
2
issue Content
1011parts. Now Coleman, the Ohristianjser of Northumbrja, was a disciple of themonastery of Bangor, in the County of Down, whose rule for conventualexercises contains express directions for the singing of the psalter by house-holds in choirs.In truth, writes Dr. Petrie, it was from these choirs that Bangor itselftook its name, meaning either Ban-choir, the fair choir, or Ben-choir, the headchoir. Antiphonal singing was also practised in the same monastery as earlyas the Northumbrian mission, and the antiphonary of Bangor itself is stillpreserved in a MS. of the seventh century at Bobbio in Italy, alluding to which,Gerebert says, when speaking of the propagation of Christianity amongst theGermans of that age: To this epoch we may refer the antiphonary of themonastry of Bangor, whence St. Columbanus, coming forth with St. Abbo hiscompanion, not only imbued our Germany with the light of the Christian faith,but also with the principles of esthetic living; doubtless the first rule forarranging ecclesiastical service amongst us, made up of psalms, canticles, hymns,collects, and antiphonies, was hence derived. The whole antiphonary, togetherwith the hymn entitled Memoria Patrum Nostrorum, is still preserved. Bothare written in perfect Latin rhyme, as well as in regular rhythm. Thus itappears that long before the appearance of rhyme in the compositions of con-tinental writers, the Irish ecelesiastics of Bangor were acquainted with choralperformance. Strange, indeed, adds Dr. Petrie, if the homely air of Balm-derry, with its cronawn or ground bags, to which so many rude and ludicrousverses have been from time to time adapted by the peasantry of Down and Antrim,be really a relic of that illustrious school of music and theology from which thechurches of Northumberland, Mercia, Germany, Franconia, Burgundy, and Switzer-land drew their knowledge, not only of ecclesiastical discipline and service, butof the Christian service itself! Giraldus Cambrengis denies the ancient Irish thehonour of the bagpipe, which is in reality responsible for a large body of Irish airs; butas Petrie points out, the pipes were common to the Scots and Irish, and werethe proper music of Ireland shortly before the siege of Limerick. Indeed, wehave in Derricks Music of Ireland a most interesting plate showing an Irishpiper blowing and playing the pipesand very magnificent ones boodressedin the flowing sleeves, and with the glib (long hair) of the native Irish. Theinstrument he carries is twice the ordinary size, and possesses a double droneand two chanters, on one of which something resembling a rude representation ofkeys may be observed.But, however this may be, Giraldus Cambrensis, who visited Ireland underthe banner of Strongbow and other Norman-Welsh invaders, and who was aninveterate opponent of everything else Irish, pays this fine testimony to the Irishharpers: They are incomparably more skilful than any other nation I haveever seen. For their manner of playing on their instruments, unlike that of theBritons (or Welsh) to which I am accustomed, is not slow and harsh, but livelyand rapid, while the melody is both sweet and sprightly. It is astonishing that,in so complex and swift a movement of the fingers, the musical proportions as totime can be preserved; and that, throughout the difficult modulations on theirvarious instruments, the harmony is completed with such a sweet rapidity. Theyenter into a movement and conclude it in so delicate a manner, and tinkle thelittle strings so sportively under the deeper tones of the bass strings they delightso delicately, and soothe with such gentleness, that the perfection of their artappears in the concealment of art.John of Salisbury (twelfth century) is equally eulogistic; whilst Old Fullersays: Yea, we might well think that all the Concert of Christendom in the Warof the Crusade conducted by Godfrey of Boulogne, would have made no music,if the Irish Harp had been wanting.There is indeed a continued record of praise, both British and Continental,of the Irish music and its professors, from the twelfth to the seventeenth centuries,which we may conclude by Draytons stanza in his Polyolbion:The Irish I admireAnd still cleave to that lyre,As our Muses mother;And think till I expireApollos such another.No actual history of the musical connection of Ireland with Scotland, Wales,and Scandinavia has been written. Such an acconst would, however, be of greatinterest, and I may briefly indicate why.Not only are the Highland Scotch largely of North Irish descent, but theScotch of the West Coast were for centuries closely connected with their kinsfolkacross the North Channel, and a constant exchange of minstrelsy went on betweenthem. From the earliest times, it was a common practice among the Irish harpistsV
issue Number
9
page Number
6
periodical Author
[Periodical]
issue Publication Date
1967-01-01T00:00:00
allowedRoles
anonymous,guest,friend,member