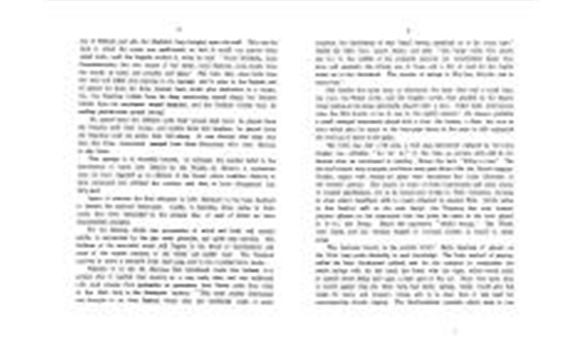 Previous | Next
Journal of the Irish Folk Song Society, Volume 2, Issue 9, Page 5
17 views
Favourite | Share | Feedback
periodical Publisher
Irish Folk Song Society
periodical Editor
[Periodical]
periodical Title
Journal of the Irish Folk Song Society
volume Number
2
issue Content
89son of Delbath, and also the Daghdas harp hanging upon the wall. This was theharp in which the music was spell-bound, so that it would not answer whencalled forth, until the Daghda evoked it, when he said: Come Durdabla, comeCoircethairchuir (the two names of the harp), come Samhan, come Camh fromthe mouth of harm and pouches and pipes. The harp then came forth fromthe wall and killed nine persons in its passage; and it came to the Daghda, andhe played for them the three musical feats which give distinction to a harper,viz., the Suantree (which from its deep murmuring caused sleep), the Gentree(which from its merriment caused laughter), and the Golitree (which from itsmelting plaintiveness caused crying).Ho played them the Goiltree until their women shed tears; he played themthe Gentree until their women and youths burst into laughter; he played themthe Suantree until the entire host fell asleep. It was through that sleep thatthey (the three champions) escaped from those Fomorians who were desirousto slay them.This passage is of threefold interest. It indicates the popular belief in theintroduction of music into Ireland by the Tuatha de Danann, a mysteriousrace, by some regarded as an offshoot of the Danai, whom tradition declares tohave conquered and civilised the country, and then to have disappeared intofairy-land.Again, it contains the first reference in Irish literature to the harp, destinedto become the national instrument. Lastly, it describes three styles of Irishmusic that have descended to the present day, of each of which we havecharacteristic examples.For the Gentree, which was provocative of mirth and frolic and excitedspirits, is represented by the jigs, reels, plauxties, and quick step marches. TheGolitree or the sorrowful music still lingers in the keens or lamentations andsome of the superb marches of the wilder and sadder type. The Suantreesurvives in many a beautiful Irish hush-song and in the so-called fairy music.Whether or no the Da Dannans first introduced music into Ireland, it isevident that it reached that country at a very early date, and was cultivatedwith such success from generation to generation that Dante could thu8 writeof the Irish harp in the thirteenth century: This most ancient instrumentwas brought to us from Ireland, where they are excellently made in greatnumbers, the inhabitants of that island having practised on it for many ages.Galilei the elder thus quotes Dante, and adds: The harps which this peopleuse [ i.e. in the middle of the sixteenth century] are considerably larger thanours, and generally the strings are of brass and a few of steel for the highernotes, as in the clavichord. The number of strings is fifty-four, fifty-six, and insome sixty.But besides this large harp or clairseach, the early Irish had a small harp, the erwit, the Welsh crwth, and the English crowd, first plucked by the fingerswhen resting on the knee, afterwards played with a bow. Other Irish instrumentswere the fidil, known to be in use in the eighth century; the timpan, probablya small stringed instrument played with a bow; the bainne, a flute; the corn orhorn, which gave its name to the horn-pipe dance, as the geifje or fidil originatedthe word jig or dance to the geige.The Irish also had a lilt pipe, a reed pipe, afterwards replaced by the voicesinging the syllables la! Ia! la! to the tune, as country girls still do fordancers when an instrument is wanting. Hence the term lilting a tune. Thestoc and sturgan were trumpets, and there were pipes blown like the Scotch bagpipe.Finally, organs with twenty-six pipes were introduced into Irish Churches inthe seventh century. The names o some of these instruments, and other namesof musical signification, are to be found even to-day in Irish surnames, showingto what extent hereditary skill in music obtained in ancient Erin. Curtin refersto this familys skill on the eruit (harp); the Tumpany clan were tympanplayersplayers on the instrument that has given its name to the tune playedto iti.e. the Dump. Hence the expression doleful dumps. The Wardswere bards, and the Cronins singers of cronncsns (confer, to croon) or streetsongs.Was harmony known to the ancient Irish? Early figurings of players onthe Irish harp point distinctly to such knowledge. The Irish method of playing,unlike the later Continental method, was for the minstrel to manipulate thetreble strings with his left hand, the lower with his right, which would pointto special stress being laid upon a bass part of the air. From very early timeit would appear that the Irish harp had thirty strings, which would give fullrange for mens and womens voices, and it is clear that it was used foraccompanying church singing. The Northumbrian monkish choirs sang in twoV
issue Number
9
page Number
5
periodical Author
[Periodical]
issue Publication Date
1967-01-01T00:00:00
allowedRoles
anonymous,guest,friend,member