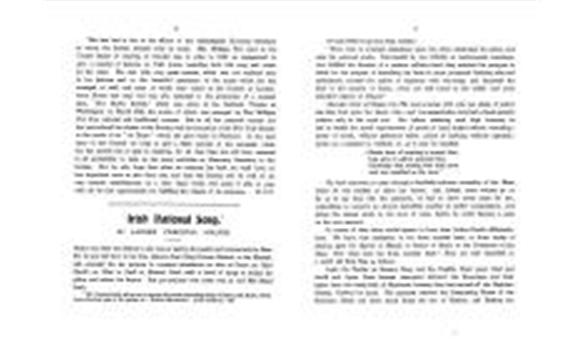 Previous | Next
Journal of the Irish Folk Song Society, Volume 2, Issue 9, Page 4
7 views
Favourite | Share | Feedback
periodical Publisher
Irish Folk Song Society
periodical Editor
[Periodical]
periodical Title
Journal of the Irish Folk Song Society
volume Number
2
issue Content
67This last fact is due to the efforts of the indefatigable Honorary Secretaryto whom the Society already owes so much. Mrs. Mulligan Fox went to theUnited States of America in October last in order to fulfil an engagement togive a number of lectures on Irish music, including both folk song and musicfor the harp. She met with very great success, which was not confined onlyto her lectures and to the beautiful specimens of the music which she hasarranged so well, and some of which were heard at the Concert at London-derry House last year, but was also extended to the production of a musicalplay, The Bardic Recital, which was given in the National Theatre atWashington on March 16th, the music of which was arranged by Mrs. MffliganFox from national and traditional sources. But in all her personal success shehas remembered the claims of the Society, and the formation of the New York Branchis the result of an At Home which she gave there in February. In the nextissue of the Journal we hope to give a fuller account of the campaign whichshe has carried out so ably in America, for by that time she will have returnedin all probability to take up her many activities as Honorary Secretary to theSociety. But we also hope that when we welcome her back we shall have noless important news to give than she, and that the Society will be well on itsway towards establishment on a firm basis which will make it able to copewith all its rich opportunities for fulfilling the objects of its existence. H. C. CIrlsb Rational SonBY ALFRED PERCEVAL GRAVES.GREAT has been the decline in the honour paid to the poetic and musical arts in Erin.For we are told how in her dim, historic dawn King Cormac (3eolach, or the Musical,had, amongst the ten persons in constant attendance on him at Court, an Ollav(Bard), an Ollav re Ceoll or Musical Bard, with a band of harps to soothe hispillow and solace hi8 leisure. But pro-eminent over these was an Ard File (HeadPoet).* Mr. Graves kindly allows us to reprint this most interesting study of Early Irish Music, whichforms the first part of his preface to British Minstrelsie (Irish Edition).Ed.Of such Files it has thus been written:They were in constant attendance upon the chief; celebrated his valour, andsang his personal praise. Surrounded by the Orfiddy, or instrumental musicians,who fulfilled the function of a modern military band, they watched his progress inbattle for the purpose of describing his feats in arms, composed birthday odes andepithalamia, aroused the spirits of clansmen with war-songs, and lamented thedead in the caoines, or keens, which are still heard in the wilder and moreprimitive regions of Ireland.Amongst other privileges, the File wore a tartan with only one shade of colourless than that upon the kings robe; and his assassination involved a blood-penaltyinferior only to the royal eric. But before attaining such high honours, hehad to satisfy the moral requirements of purity of hand, bright without wounding;purity of mouth, without poisonous satire; purity of learning without reproach;purity, as a husband in wedlock, or, as it may be versified:Hands clean of treacherys coward blow,Lips pure of satires poisoned flow,Knowledge that nothing base doth know,And love unsullied as the snow.He had, moreover, to pass through a decidedly arduous courtship of the Musebefore he was entitled to claim her favour; and, indeed, some writers go sofar as to say that, like the patriarch, he had to serve seven years for her,committing to memory an almost incredible number of earlier compositions, andgiving the closest study to the laws of verse, before he could become a poeton his own account.In course of time there would appear to have been further Bardic differentia-tions. We learn that perfection in the three musical feats, or three styles ofplaying, gave the dignity of Ollamh or Doctor of Music to the Professors of theHarp. Now what were the three musical feats? They are well described ina weird old Folk Tale as follows:Lugh, the Tuatha do Danann King, and the Daghda (their great chief anddruid) and Ogma (their bravest champion) followed the Fomorians and theirleader from the battle-field of Moyturah, because they had carried off the DaghdasHarper, Uaithne by name. The pursuers reached the Banqueting House of thePomorian Chiefs and there found Breas the son of Elathan, and Elathan theF
issue Number
9
page Number
4
periodical Author
[Periodical]
issue Publication Date
1967-01-01T00:00:00
allowedRoles
anonymous,guest,friend,member