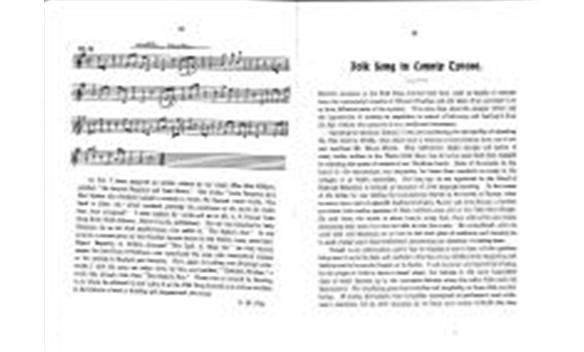 Previous | Next
Journal of the Irish Folk Song Society, Volume 2, Issue 8, Page 12
9 views
Favourite | Share | Feedback
periodical Publisher
Irish Folk Song Society
periodical Editor
[Periodical]
periodical Title
Journal of the Irish Folk Song Society
volume Number
2
issue Content
2223/97:.Jfl ij r jifl iJrIn Vol. 7 there appeared an article written by my sister, Miss Alice Mulligan,entitled, Sir Samuel Ferguson and Irish Music. She writes, Lady Ferguson gaveHerr Sjoden (the Swedish harpist) a melody to which Sir Samuel wrote words, TheLark in Clear Air, which rendered perfectly the sentiment of the music for whichthey were composed. I refer readers for words and air to Mr. A. P. Graves IrishSong Book (Irish Library; Fisher tinwin, publishers). The air was imparted to LadyFerguson by an old Irish gentlewoman, who called it, The Tailors Son. It wassung at a concert given by the Swedish harpist before he left Dublin, many years later.Signor Esposito, of Dublin, arranged The Lark in Clear Air for that famoussinger, the late Denis OSullivan, who introduced the song with tremendous successat his recitais in England and America. Now, again, in looking over Bustings note-books, I find the same air taken down by him, and entitled, Kathleen Nowjan, amuch less prosaic title than The Tailors- Son. There was no remark by Buntingas to where he collected it, and I give it to the Folk Song Journal as a curious incidentin the history of such a thrilling and impassioned love song.C. M. Fox.3 o1k Son i in Countp Cprone.RECENT numbers of the Folk Song Journal have been made up largely of extractsfrom the manuscript remains of Edward Bunting, and airs taken down and sent in tous from different parts of the country. It is some time since the present writer hadthe opportunity of making an expedition in search of folk-song, and hearing it fromthe lips of those who preserve it as a traditional inheritance.Spending the spring in Ireland, I was just considering the advisability of attendingthe Feis Oeoil in Dublin, when there came a welcome communiation from one of ournew members, Mr. Henry Morris. This well-known Gaelic scholar, and author ofmany books written in the Ulster Irish idiom, has for some years back been engagedin collecting the poems of certain of our Northern bards. Some of the poems he hasfound in old manuscripts, but frequently he hears them rendered as songs in thecottages or at Gaelic assemblies. Not long ago he was appointed by the Board of- National Education in Ireland as Inspector of Irish language teaching. In the courseof his duties he was visiting the mountainous district on the border of Tyrone, whenhe came upon a pair of splendid traditional singers, Eamon and Anne Tracey, a brotherand sister, both native speakers of Irish, resident some nine or ten miles from Omagh.He took down the words of about twenty songs from them without by any meansexhausting their store, but was not able to note the music. He immediately sent meword with full directions as to how to find their place of residence, and warning meto send a letter some days beforehand, announcing my intention of visiting them.Omagh is my native place, and it was no surprise to me to hear of Irish speakersliving near it, as in the fairs and markets in the days of my childhood the bargaining anddealing used to be carried largely on in Gaelic. I had, however, not heard Irish singing,for the singer of Irish is never a street singer, but belongs to the more respectableclass of small farmers, up in the mountain districts where the native Irish were notdispossessed. The wandering poets found shelter and hospitality in these little countryhomes. Of course, the harpers were invariably entertained at gentlemens and noble-mens mansions, bet on their journeys, as we learn from Arthur ONeills life, theyF
issue Number
8
page Number
12
periodical Author
[Periodical]
issue Publication Date
1967-01-01T00:00:00
allowedRoles
anonymous,guest,friend,member