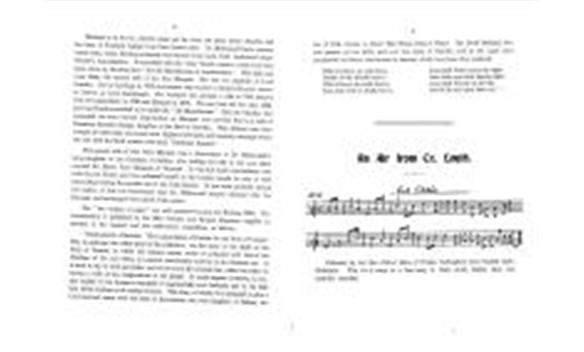 Previous | Next
Journal of the Irish Folk Song Society, Volume 2, Issue 8, Page 5
6 views
Favourite | Share | Feedback
periodical Publisher
Irish Folk Song Society
periodical Editor
[Periodical]
periodical Title
Journal of the Irish Folk Song Society
volume Number
2
issue Content
89Murlogh is on the Co. Antrim coast, not far from the place where Deirdre andthe Sons of Iiisneach landed from their Scotch exile. Dr. McDonnell had a countryhouse there, where Bunting evidently had secured from some Irish traditional singerDeirdres Lamentation It coincided with the other Scotch version, which had beentaken down by Bunting from the old Marchioness of Londonderry. This lady wasmost likely the second wife of the first Marquis. She was the daughter of LordCamden. By her marriage in 1775 she became step-mother to Robert Stewart, knownto history as Lord Oastlereagh. Her husband was granted a title in 1795, becameEarl of Londonderry in 1796 and Marquis in 1816. She survived till the year 1833,and was therefore entitled to be called the old Marchioness. Her son Charles, whosucceeded his more famous step-brother as Marquis, was married first to a lady ofillustrious Scottish lineage, daughter of the Earl of Darnley. This alliance may havebrought the elder lady into touch with Highland ervants and tenantry, amongst whomshe met with the blind woman who sang Dardraes Lament.The second wife of this third Marquis was a kinswoman of Dr. McDonnells,being daughter of the Countess of Antrim, who, holding the title in her own right,married Sir Henry Vane Tempest, of Wynard. It was this Lady Londonderry whobuilt Garron Tower, and who endeared herself to the country people by acts of wisebenevolence during the terrible era of the Irish famine. It was most probably duringthe rgime of this his kinswoman that Dr. McDonnell became intimate with theDowager and exchanged views about Irish music.The two stripes of paper are still preserved among the Bunting MSS. TheLamentation is published in the 1840 Volume, and Samuel Ferguson supplies anaccount of the Legend and his well-known translation, as follows:Neaill ghubh a Dheirdre. The Lamentation of Deirdre for the Sons of Usnach.This is, perhaps, the oldest piece in the collection; for the story of the death of theSons of tisnach, in which the lament occurs, ranks in antiquity with that of theChildren of Lir, and refers to a period considerably anterior to the Ossianjc era. Itis hard to say in what particular part of the story the interest lies, which has taken sostrong a hold on the imaginations of the people. It would appear, however, .to con-sist mainly in its frequent examples of magnanimi%y and fortitude, and in the highidea which it gives us of ancient honour. The story, of which it is proposed to give abrief abstract, opens with the birth of the heroine, who was daughter of Felimy, theson of Dali, rhymer to Conor Mac Nessa, King of Ulster. The Druid Oathbad, whowas present at her birth, gave her the name of Deirdre, and at the same timeprophesied her future misfortunes in stanzas, which have been thus rendered:RH JIir from Co. oulb./12.4 I j riii Jj i 1 iI r JCollected by the Rev. Father Quin, of Cooley, . Carlingford, from Patrick Quin,Mullabain. This air is sung to a fine song in Irish, which Father Quin hascarefully recorded.Child of sorrow, sin and shame,Dcirdre be thy dreaded name IChild of doom, thy fatal charmsSoon shall work us deadly harms.Long shall Ulster mourn the nightGave thine eyes their blasting light;Long shall Usnach rue the dayShewd his sons their fatal ray! Lir
issue Number
8
page Number
5
periodical Author
[Periodical]
issue Publication Date
1967-01-01T00:00:00
allowedRoles
anonymous,guest,friend,member