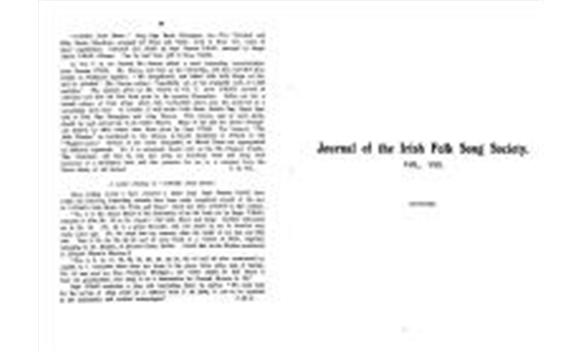 Previous | Next
Journal of the Irish Folk Song Society, Volume 2, Issue 8, Page 1
11 views
Favourite | Share | Feedback
periodical Publisher
Irish Folk Song Society
periodical Editor
[Periodical]
periodical Title
Journal of the Irish Folk Song Society
volume Number
2
issue Content
86ONeills Irish Mnaic: Airs 5 Jigs, Reels, Hornpipes, etc.Two Hundred andFifty Choice Selections, arranged for Piano and Violin: most of -them rare, many ofthem unpublished. Collected and edited by Capt. Francis ONeill; arranged by Sergt.James ONeill, Chicago. Can be had from Gill & Sons, Dublin. -In Vol. V. of our Journal Mr. Graves edited a most interesting communicationfrom Francis ONeill. Mr. Graves met hith at the Oireachtas, and they travelled fromDublin to Holyhead together. W foregathered, and talked Irish Folk Songs ad hb.,and he whistled (Mr. Graves relates) beautifully out of his wonderful work of 1,850melodies. The extracts given by Mr. Graves in Vol. V. show ONeills method ofcollection and how his first book grew to its present dimensions. Before me lies &second volume of Irish Music which this wonderfully active man has produced in aremarkably short time. It consists of well-known Irish Reels, Dotible Jigs, Single Jigs,Slip or Hop Jigs, Hornpipes and Long Dances. This volume, easy to carry about,should be used extensively at all Gaelic Dances. Many of the -airs are known through-out Ireland, by other names than those given by Capt. ONeill. - - For instance, TheIrish Woman, as mentioned in the volume, is known familiarly in Ireland- as theWasherwoman Several of the tunes designated as March Tunes are appropriateditlnith is commonly known bee s tbehOth Journal of the Irish Folk Song Society.memories of a far-distant land, and also preserve for us, in a compact form, theDance Music of old Ireland. - C. M. Fox. i VOL. VIII.A Letter relatisq to ONeills frisl& Music.Since writing review I have received a letter from Capt. Francis ONeill, fromwhich the following interesting extracts have been made respec1 ing several of the airsin ONeills Irish Music for Violin and Piano, which has been reviewed in this number. COPYRIGHT.No. 1 of the Dance Music is the elaboration of an old Irish air by Sergt. ONeill;compare it with No. 15 in Dr. Joyces Old Irish Music and Song. Another elaboratedair is No. 18. No. 12 is a great favourite, and was heard by me in America verymany years ago. No. 26 crept into my memory after the death of my last and fifthson. Nos. 2, 15, 32-, 33, 38, 40 and 41 were found in a volume of MSS., criginallybelonging to Dr. Hudson, of Stevens Green, Dublin. (Could this be the Hudson mentionedin Thomas Moores Memoirs?)Nos. 5, 8, 11, 17, 19, 20, 21, 22, 23, 24, 27, 85, 87 and 46 were contributed bymyself, as I remember them from my home in the glens, three miles east of Bantry.No. 14 was sent me from Northern Michigan; the writer stated he had learntL itfrom his grandmother, who sang it as a lamentation for General Munroe in 98.Capt. ONeill concludes a long and interesting letter by saying: We must lookfor the revival of Irish music as a national work if its study is not to be onfinedto the antiquarian and musical archanlogist. C. M. F.S
issue Number
8
page Number
1
periodical Author
[Periodical]
issue Publication Date
1967-01-01T00:00:00
allowedRoles
anonymous,guest,friend,member