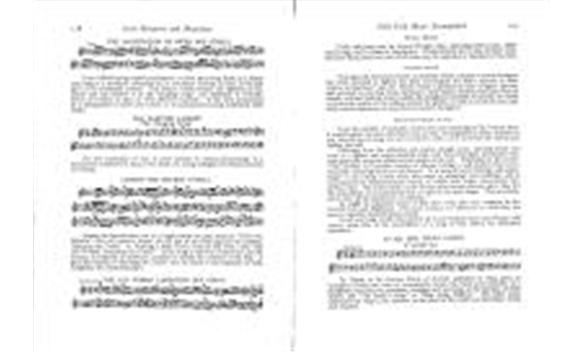 Previous | Next
O'Neill - Irish Minstrels and Musicians, Volume 1, Issue 1, Page 60
2 views
Favourite | Share | Feedback
periodical Publisher
Regan Printing House, Chicago, 1913
periodical Editor
[none]
periodical Title
O'Neill - Irish Minstrels and Musicians
volume Number
1
issue Content
ii8 Irish Minstrels and .l 1 JusiciansTHE LAMENTATION OF OWEN ROE ONEILLr i i J flr I r rEvery ballad having capital punishment or other harrowing death as a themewas sung to a peculiarly mournful air, in southwest Munster at least, in the lasthalf of the nineteenth century. This lament, which escaped the vigilance of Dr.Petrie and was alluded to as the hanging song, was published in ONeillsMusic of Ireland, in 1902, as The Martyrs Lament. It has been pronouncedby a distinguished vocalist and lecturer to be unsurpassed among traditional Irishdirges.t)THE MARTYRS LAMENT(The Hanging Song)Not less expressive of woe, if more modern in musical phraseology, is alamentation composed in 1904 on the (leath of a young collegian of brilliant promisein Chicago.LAMENT FOR ROGERS ONEILLpJ.:I r r liI,hAmong the lamentations not of a tragic nature we may mention Ullulu moMJiailinthe old womans lament for the loss of her little bag and its contents.Rocking the Cradle, or Rocking a Baby Thats None of My Own, and TheOld Woman Lamenting Her Purse. In the song to the first of these airs, the oldwoman, in response to questions, recounts in details the contents of the bag. Agood description of Rocking the Cradle may be found in the biography of JohnCoughian, the Australian piper.WithfeelirigTIIE OLD WOMAN LAMENTING HER PURSE- - - .;;_Irish Folk Music Exemplified 119RURAL MusicUnder this head may be classed Plough tunes, Spinning-wheel tunes, Milk-maid songs, and Loobeen or Luinig airs. Comparatively few of any of these varie-ties have been preserved, and all of them may be regarded as obsolete by this time.PLOUGH TUNESAmongst the numerous classes of melodies which a people so music-loving asthe Irish, invented to lighten the labor and beguile the hours devoted to theirvarious occupations, says Dr. Petrie, there is perhaps no one of higher interest,and certainly no one that I have listened to with deeper emotion, than that class ofsimple, wild and solemn strains which the ploughman whistles in the field to sootheor excite the spirits of the toiling animals he guides, as well as to fill his own earswith sounds expressive of peaceful and solemn thoughts.SPINNING-wHEEL TUNESFrom the number of melodies of this class vet remaining in Dr. Petries time,it would appear, he says, that there was no sort of occupation or labor, indoors orout, that the use of song w-as not resorted to with a view to sustain the spirits andlighten the toil.Differing from the plaintive and solemn plough tunes, spinning-wheel airswere of a lighter and more mirthful kind, and from Buntings description theywere generally songs in which several singers took part. Following are his words:The Loobeen is a peculiar species of chaunt, having a well-marked time and afrequently recurring chorus or catchword. It is sung at merry-makings and assem-blages of the young women when they meet at spinnings and quiltings, and isaccompanied by extemporaneous verses, of which each singer successively fur-nishes a line. The intervention of the chorus after certain phrases gives time forthe preparation of an appropriate line or reply by the next singer. The airs them-selves bear all the appearance of antiquity.As might be expected, tunes of this class were also very common in theScottish Isles antI Highlands. The name 1_uwigs. or Luinnochs, by which they areknown, signifies cheerful chorus music.An air and song of this class picked tip in our boyhood (lays near Bantry willconvey some idea of the possibilities of a song of that nature for unlimitedextension.IF ALL THE YOUNG LADIESA Luibin AirDr. Petrie, in his Ancient Music of Ireland, published in 1855, gives asexamples of this rare class of occupational tunes, the music and responses of aploughman and his two assistants, working and worrying, at the lateness of theirdinner, and The Smiths Song, or Ding, dong, didilium. The latter namerepresents the ring of the hammer on the anvil as the smith and his helper strikeand respond.A L 1I - fr/ _ frt!- ModerateI 11_ I
issue Number
1
page Number
60
periodical Author
O'Neill, Capt. Francis
issue Publication Date
1913-01-01T00:00:00
allowedRoles
anonymous,guest,friend,member