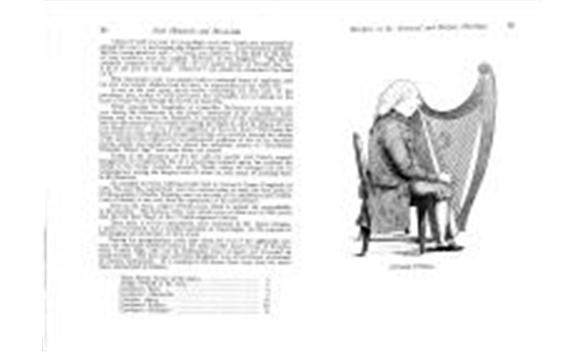 Previous | Next
O'Neill - Irish Minstrels and Musicians, Volume 1, Issue 1, Page 44
1 views
Favourite | Share | Feedback
periodical Publisher
Regan Printing House, Chicago, 1913
periodical Editor
[none]
periodical Title
O'Neill - Irish Minstrels and Musicians
volume Number
1
issue Content
86Iris/ i Minstrels and lvlusiciansArthur ONeill was sent for accordingly, and when dinner was announced hegroped his way to a seat among the Munster chieftains. Lord Kenmare, address-ing the young minstrel, said: ONeill, you should be at the head of the table,as your ancestors were the original Milesians of this kingdom. My lord,promptly responded Arthur ONeill, ifs no matter where an ONeill sits; letit be at any part of the table. Wherever I am should be considered the headof it.This impromptu reply was greeted with a universal burst of applause, andhis arm was almost shaken from his body, in appreciation of his ready wit.It was in the year 1760, shortly before completing his first tour of theprovinces, that Arthur ONeill performed the memorable act of playing on theharp of Brian Born through the streets of Limerick.While enjoying the hospitality of rCouricillor McNamara of that city, hewas shown the framework of the historic instrument at the councjllors townhouse, and, as he says in his Memoirs, in consequence of the national esteem heheld for the memory of its owner, he strung and tuned it, after its silence of overtwo hundred years. It was at the suggestion of his host, that ONeill hung theharp from his neck, being then young and strong, and paraded through the streetsof the patriotic city, followed by an enthusiastic audience of fire or six hundredpeoplegentle and simpleas he played the melodious strains of SavourneenDheelish, Eileen Oge, and other tunes not named.Tiring of the monotony of his life with his parents and friends aroundDungannon, he resumed the life of a wandering minstrel again, hut confined hiscircuit to the Ulster counties, especially Cavan, where he enlarged his list ofacquaintances among the harpers, and of whom he tells many an amusing storyin his MemoirsHe attended the three celebrated balls held at Granard, County Longford, in1781, 82, and 83, respectively, and won second prize at each, the first prize inall three going to Charles Fanning, more on account of his shabbiness and evidentwant of money, it was said, than the superiority of his performance.Even in his dress, Arthur ONeill never failed to uphold the respectabilityof his ancestry. The buttons of his coat, which were of silver and of half crownsize, had the Red Hand of the OXeills engraved thereon.These balls, it will be remembered, were instituted by Mr. James Dungan,a native of Granard, and a wealthy merchantof Copenhagen, for the purpose ofencouraging the promotion of harp music.During his peregrinations some time about the end of the eighteenth cen-tury, the renowned minstrel called at the home of Mr. James Irvine of Streams-town, County Sligo, who was an enthusiastic lover of music, and possessed anample fortune. His four sons and three daughters were all proficient performerson various instruments. At a meeting in his house there were forty-six musi-cians, enumerated at follows:Three Misses Irvine at the piano 3Arthur ONeill at the harp rGentlemen flutes 6Gentlemen violoncellos 2Common pipers 10Gentlemen fiddlers 20Gentlemen clarionets 4Harpers at the Granard and Belfast MeetingsARTHUR ONEILL87
issue Number
1
page Number
44
periodical Author
O'Neill, Capt. Francis
issue Publication Date
1913-01-01T00:00:00
allowedRoles
anonymous,guest,friend,member