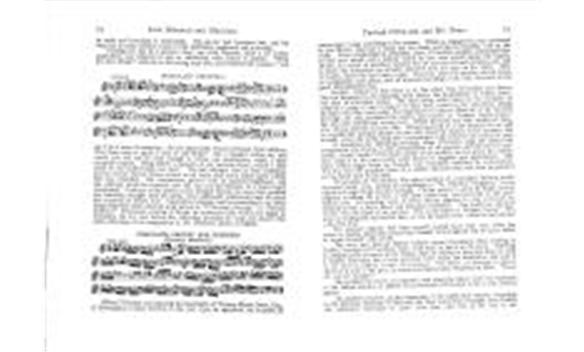 Previous | Next
O'Neill - Irish Minstrels and Musicians, Volume 1, Issue 1, Page 38
3 views
Favourite | Share | Feedback
periodical Publisher
Regan Printing House, Chicago, 1913
periodical Editor
[none]
periodical Title
O'Neill - Irish Minstrels and Musicians
volume Number
1
issue Content
Irish lk [ instrels and Musicians74in spirit and brooding in melancholy. His gayety had forsaken him, and hisharp lay in some obscure corner of his habitation, neglected and unstrung.Passing one day by a grocers shop, our Irish Orpheus, after a six weeksquarantine, was tempted to step in, undecided what course to pursue. Well,my dear friend, cried he to the young man who stood behind the counter, youAnimated OGAROLAN DEVOTIONI IT= rr r i r Jtf: . - Irisee I am a man of constancy; for six long weeks I have refrained from whiskey.Was there ever so great a case of self-denial? But a thought strikes me, andsurely you will not be cruel enough to refuse one gratification which I shallearnestly request. Bring hither a measure of my favorite liquor, which I shallsmell to, but indeed shall not taste. The lad indulged him on that condition;and no sooner did the fumes ascend to his brain than every latent spark withinhim was rekindled. His countenance glowed with an unusual brightness, andthe soliloquy which he repeated over the cup was the effusion of a heart newlyreanimated. Contrary to the advice of his medical friends, he once more quaffedthe forbidden draught until his spirits were sufficiently exhilarated and his mindhad resumed its former tone. Inspiration returned, and he immediately set aboutcomposing that much admired song known as OCarolans Receipt, or PlanxtyStafford. That same evening, at Boyle, he commenced the words and began toformulate the air, and before the following morning he sang and played thisnoble offspring of his imagination in Mr. Staffords parlor at Elphin.OCAROLANS RECEIPT FOR DRINKINGWith spirit (Planxty Stafford) ..-.- cfr -rt- i iJThr r 1 = J .Ji-i-! Ti r- 4iiTurlogh OCarolan and His Times 7composing a song, according to his custom. While so engaged he was overheardby one Moore, who had a ready ear for music and played tolerably well on theviolin. After completing his inimitable piece, OCarolan proudly announced thathe had now struck out a melody which he was sure would please the Squire.Moore, in a spirit of mischief, insisted the air was an old anti common one. andto prove his contention he actually played it note for note on the violin. This,of course, threw the bard into a rage. However, when his passion calmed down,an explanation took place, and all misunderstandings were duly drowned in thegood old-fashioned way.Another version of this story is to the effect that OCarolan and BaronDawson happened to be enjoying, with others, the hospitahities of Squire Jones,and slept in adjoining rooms. The bard being called upon by the company tocompose a song or tune in honor of their host, retired to his apartment. takinghis harp with him, and under the inspiration of copious libations of his favoritebeverage, not only produced the melody now known as Bumper Squire Jones,but also very indifferent words to it. While the bard was thus employed, how-ever, Baron Dawson was not idle. Being possessed of a fine musical ear as wellas considerable poetical talents, he not only fixed the melody in his memory, butactually wrote the noble ong now incorporated with it before he retired to rest.At breakfast the following morning, when OCarolan sang and played hiscomposition, the Baron, to the astonishment of all present, and the hard in par-ticular, stoutly denied OCarolans claims to the melody, and to prove his conten-tion, sang it to his own words amid shouts of laughter and approbation. Thebard, whose anger knew no bounds, was eventually mollified by explanations.Not few were the practical jokes of a similar character that had been perpetratedon the blind bard in his time.All accounts of OCarolans life make mention of a romantic incident whichoccurred about 1713, during his pilgrimage to St. Patricks Purgatory. in anisland in Lough Derg, County Donegal. On his return to shore lie found severalpilgrims awaiting the arrival of the boat which had conveyed him to the peni-tential cave. In assisting sonie of those devout pilgrims to step on board, hechanced to take a ladys hand, and instantly exclaimed: Par lamha mo chardaisCriost (by the hand of my gossip), this is the hand of Bridget Cruise. Hissense of feeling did not deceive him; it was the hand of her whom lie had adoredhis first love.His musical capacity had been severely tested niore than once when thecraze for Italian niusic had crossed the Channel from England, but lie never failedto acquit himself with credit.The story goes that an Italian voilinist named Geminiani, then residing inDublin, hearing of OCarolans fame, took steps to put it to the proof. Selectingan elegant piece of music in the Italian style, lie altered it here and there in sucha manner that none but a keen musician could detect the mutilation, and sent itto the bard at Elphin. County Re comniO1i. The latter, on hearing it played.declared it to be a fine piece of music, but humorously remarked in Irish: Ta seair cois air bacaige!He rectified the errors as requested, and when the music score was returnedto the Italian maestro in Dublin. he pronounced OCarolan to be a true musicalgenius.On another occasion, at the beginning of the eighteenth century, accordingto the historian Sylvester OHalloran, the then Lord Mayo brought from Dublinthe celebrated Geniiniani to pend some time with him at his seat in the, p- IcWhen OCarolan was enjoying the hospitality of Thomas Morris Jones, Esq.,of Moneyglass, County Leitrim, in the year 1730, he signalized the occasion by
issue Number
1
page Number
38
periodical Author
O'Neill, Capt. Francis
issue Publication Date
1913-01-01T00:00:00
allowedRoles
anonymous,guest,friend,member