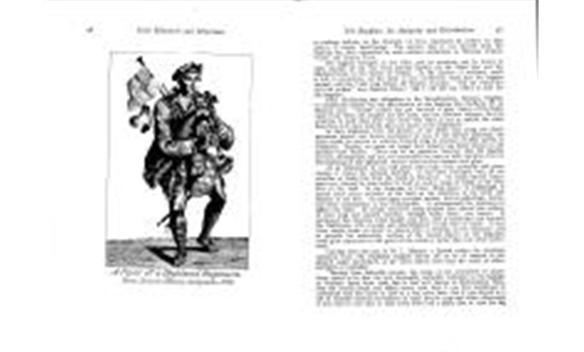 Previous | Next
O'Neill - Irish Minstrels and Musicians, Volume 1, Issue 1, Page 24
13 views
Favourite | Share | Feedback
periodical Publisher
Regan Printing House, Chicago, 1913
periodical Editor
[none]
periodical Title
O'Neill - Irish Minstrels and Musicians
volume Number
1
issue Content
46 Irish Minstrels and J vIusiciansTue Bagpipe, Its Anjiquity and Distribution 47to nothing definite, as the diversity of views expressed by writers on thatsubject is simply bewildering. The opinion that it was derived from theRomans has been discarded by such modern authorities as Manson, DuncanFraser, and Grattan Flood.The bagpipe belonged to the Celts, and its existence can be traced totheir colonies all the way from ancient Scythia via the Black Sea, and theMediterranean to the shores of Britain. In the absence of evidence, muchis left to conjecture, yet the claim is now confidently made that the bagpipearrived with the Celts long before the Roman invasion. Tell me where theold Celt settled, says Duncan Fraser, and I will tell you where to look forthe bagpipe.After disclaiming any obligation to the Scandinavians, Romans, English,or cOntinental nations for the introduction of the bagpipe into Scotland, W. L.Manson says: Ireland indeed can put forward a good claim,Christianitycame from there, the peoples are the same, and the relations between the twocountries in early days were very closebut there is less to uphold the claimthan there is to show that the pipes are native to the Highlands.In th ir migration from the borders of the Black Sea, along the Medi-terranean shores, and thence northward by way of the Iberian peninsula, theCelts would be certain to colonize Ireland long in advance of their advent inCaledonia. Besides, we must ilot forget that Ireland was better known to theancients than Britain. There can be no question, however, that the bagpipein form, development, and use,was essentially the same in both countries clown tothe beginning of the eighteenth century when radical changes took place.As an instrument of war and peace with tones clear, powerful and pene-trating, it voiced the national melodies. It had been associated with all theactivities of Gaelic life from the cradle to the grave. No single musical instru-ment ever devised by man united in itself so wide a range of utility as the PiobMor of the Gael. In the language of Lieut. MacLennan of Edinburgh. itpealed forth merry melodies in the halls of the chieftains at the birth, andbaptism of the heir. At marriages convivial parties, festive gatherings, dances,and other amusements, it was indispensible. It accompanied the workman tolighten his labor. Its steady measured notes assisted and solaced the soldiersin their long and painful marches, through rocks, rivers, and deserts. Itsummoned the clansmen when danger was near, and it stimulated and inspiredthe Highlander with courage and determination on the field of battle. It hadfrom remote times its share in solemn acts of devotion in the sanctuary, andat funerals the melancholy wailing of the lament played on the bagpipes,could give expression to the grief of the relatives better than any other instru-ment.Coming from the pen of W. L. Manson, a Scotch writer, the subjoinedquotation from The Highland Bagpipe cannot fail to be of interest to thegeneral reader particularly as his views cannot have been the result of eitherpartiality or prejudice.Passing from debatable ground, the result of our assortment of quota-tions, seems to be that the first thoroughly authentic reference to the bagpipein Scotland, dates from 1406, that it was well known in Reformation times,that the second drone was added about 1500, that it was first mentioned inconnection with the Gaelic in 1506 or a few years later, that it was classed in alist of Scottish musical instruments in 1548, that in 1549 and often afterwardsit was used in war, that in 1650 every town had a piper, that in 1700 the big., 4 z zep of aFrom 6}o 5e& iaryAz7I4ruzWes. 1Zc 6.
issue Number
1
page Number
24
periodical Author
O'Neill, Capt. Francis
issue Publication Date
1913-01-01T00:00:00
allowedRoles
anonymous,guest,friend,member