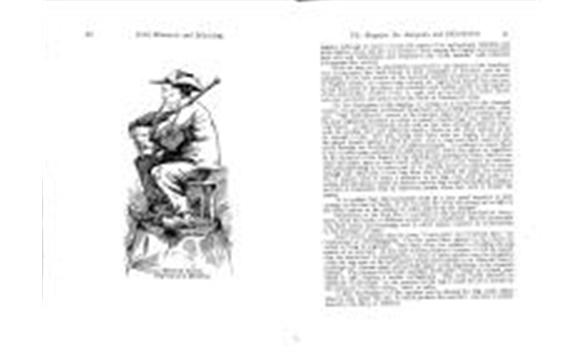 Previous | Next
O'Neill - Irish Minstrels and Musicians, Volume 1, Issue 1, Page 21
10 views
Favourite | Share | Feedback
periodical Publisher
Regan Printing House, Chicago, 1913
periodical Editor
[none]
periodical Title
O'Neill - Irish Minstrels and Musicians
volume Number
1
issue Content
40 Irish Minstrels and MusiciansThe Bagpipe, Its Antiquity and Distribution 41bagpipe, although in course of time the rigors of its enforcement subsided, andthose against whom the law was directed, went among the English and exercisedtheir arts and minstrelsies, and returned to the Irish enemies with whateverinformation they secured.While we may not he particularly concerned in the identity of the warpiperswho accompanied the Irish Kerns in their campaigns in Scotland, and on thecontinent, in the fifth decade of the sixteenth century to bolster up the interestsof English royalty, we cannot help voicing our regret that history has not pre-served the names of the pipers who rendered such valiant service at the battle ofBclanathalniidhe (Yellow Ford) in 1598. and at the battle of Cui-lew Moun-tain one year later, and above all at the battle of Fontenoy in 1745.For the description of the bagpipe, or warpipe as it existed in the sixteenthcentury, we are indebted to Richard Stanyhurst, who, writing about the year 1584.says: The Irish likewise, instead of the trumpet, make use of a wooden pipe ofthe most ingenious structure to which is jomed a leather bag, very closely boundwith bands. A pipe is inserted in the side of this skin, through which the piper.with his swollen neck and puffed-up cheeks, blows in the same manner as wedo through a tube. The skin, being thus filled with air, begins to swell, andthe player presses against it with his arm ; thus a loud and shrill sound is pro-duced through two wooden pipes of different lengths. In addition to these, thereis yet a fourth pipe, perforated in different places. which the player so regulates,by the dexterity of his fingers in the shutting and opening the holes, that he cancause the upper pipes to send forth either a loud or a low sound, at pleasure.The principal thing to be taken care of is, that the air be not allowed to escapethrough any other part of the bag than that in which the pipes are inserte(l.For if anyone were to make a puncture in the bag, even with the point of aneedle, the instrument would be spoiled, and the bag would immediately collapse,and this is frequently done by humorous people when they wish to irritate thepipers.It is evident that this instrument must be a very good incentive to theircourage at the time of battle, fcr by its tones the Irish are stirred up to fight inthe same manner as the soldiers of other nations by the trumpet.Illustrations of the Piob Mor or warpipes of this period described by Stany-hurst, from the brush of different artists, prove conclusively that the instrumentwas both ornate and imposing, and it would appear superior in workmanshipto the warpipes of today.Some writers assume that the terms Cuisle pipes and Uillcann pipes aresynonymous or interchangeable. On this point there appears to be a hook onwhich to hang an argument. That there were two methods of holding the bagadmits of no question. In the more ancient pictures of pipers, it will be noticedthat the instrunient is suspended by a strap or band passed over the shoulders.while the bag rests on the performers breast and stomach as in Alhrecht Durerspaintings of a German piper, and an Irish piper at the beginning of the sixteenthcentury. The picture of the Irish warpiper in Derricks Image of Ireland, pub-lished in 1581, displays a similar arrangement. This style would naturally becalled the Cuisle pipes. as the pressure on the bag to expel the air is exerted bythe forearms or wristshence. cuisle, or pulse.A later development of the warpipe was in placing the hag, much dimin-ished in size, under the arm, in which position the necessary pressure is admin-istered by the elbow or Uilleann.
issue Number
1
page Number
21
periodical Author
O'Neill, Capt. Francis
issue Publication Date
1913-01-01T00:00:00
allowedRoles
anonymous,guest,friend,member