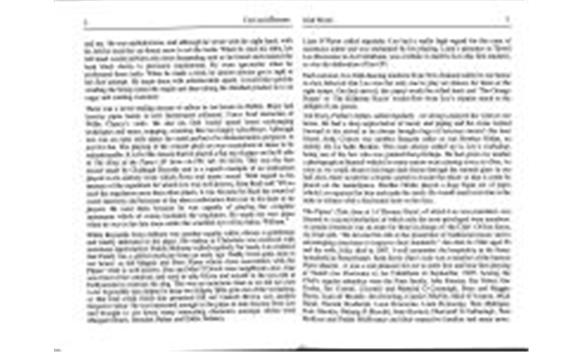 Previous | Next
Ceol na hÉireann / Irish Music, Volume 1, Issue 3, Page 6
4 views
Favourite | Share | Feedback
periodical Publisher
Na Píobairí Uilleann
periodical Editor
Chairman, NPU
periodical Title
Ceol na hÉireann / Irish Music
volume Number
1
issue Content
2Ceol na hEireann Irish Music3and me. He was ambidextrous, and although he wrote with his right hand, withhis left he used the cut throat razor to cut the reeds. When he used his lathe, hisleft hand would perform the most demanding task as he bored and reamed thehard black ebony to precision requirement. He wore spectacles when heperformed these tasks. When he made a reed, he almost always got it right atthe first attempt. He made them with unbelievable speed. I recall him quicklywinding the hemp round the staple and then taking the finished product in to aneager and waiting customer.There was a never-ending stream of callers to our house in Dublin. Many hadlessons, pipes tuned, or new instruments collected. I have fond memories ofWillie Clancys visits. He and my Dad would spend hours exchangingtechniques and tunes, snipping, cranning like two happy schoolboys. AlthoughLeo was an open style piper, he could perform for demonstration purposes orjust for fun. The playing of the concert pitch set was considered at times to beunfashionable. It is for this reason that he played a flat set of pipes on the B sideof The King of the Pipers LP (now on CD, ref. CC1CD) . This was the firstrecord made by Claddagh Records and is a superb example of an instrumentplayed in its entirety from which flows real music sound. With regard to hismastery of the regulators for which Leo was well known, Sean Reid said If Leoused the regulators more than other pipers, it was because he liked the sound ofsweet harmony and because of the sheer exuberance that rose in his heart as heplayed. He used them because he was capable of playing the completeinstrument which of course included the regulators. He made his own pipeswhen he was in his late teens under the watchful eye of his father, William.Willie Reynolds from Athione was another regular caller, always a gentlemanand totally dedicated to the pipes. His turkey at Christmas was received withenormous appreciation! Paddy Moloney called regularly for reeds. Leo realisedthat Paddy was a gifted musician from an early age. Paddy lived quite near toour house, as did Maggie and Peter Flynn whose close association with thePipers Club is well known. Dan and Mai ODowd were neighbours also. Danwas fond of the outdoors and used to take Olivia and myself to the sea-side atDollymount to exercise his dog. This was an enormous treat as we did not owna car. It possibly also helped to keep two fidgety little girls out of the workshop,so that Dad could finish that promised full set! Garech Brown was anotherfrequent visitor. He was interested enough in the pipes to take lessons from Leoand brought to our home many interesting characters amongst whom wereMargaret Barry, Brendan Behan and Eddie Delaney.Liam OFlynn called regularly. Leo had a really high regard for this man ofenormous talent and was enchanted by his playing. Liams presence at TionlLeo Rowsome in An Cultrlann, was a tribute in itself to Leo (his first teacher),as was the dedication of his CD.Each sun mer, two Irish dancing teachers from New Zealand called to our houseas they believed that Leo was the only one to play set dances for them at theright tempo. On their arrival, the carpet would be rolled back and The OrangeRogue or The Kilkenny Races would flow from Leos chanter much to thedelight of our guests.Ted Furey, Finbars father, called regularly - we always enjoyed his visits to ourhome. He had a deep appreciation of music and piping and the twins lookedforward to his arrival as he always brought bags of luscious sweets! Our dearfriend, Andy Conroy was another frequent caller as was Brother Gildas, anelderly De La Salle Brother. This man always ended up in Leos workshop,being one of the few who was granted that privilege. He had given my mothera photograph of himself which for some reason went missing every so often. Assoon as we could observe his huge dark frame through the stained glass in ourhail door, there would be a frantic search to locate the photo so that it could beplaced on the mantelpiece. Brother Gildas played a huge Egan set of pipeswhich Leo repaired for him and made his reeds. He would stand over him at thelathe in silence with a fascinated look on his face.The Pipers Club, then at 14 Thomas Street, of which Leo was president, waslikened to a sacred institution of which only the most privileged were members.A certain reverence was in order for those in charge of the Club. Of Jim Seery,my Dad said, He devoted his life to the promotion of traditional music and toencouraging musicians to improve their standards. Jim died in 1966 aged 65and his wife, Julia, died in 1967. I well remember the hospitality in the Seeryhousehold at Stoneybatter. Sean Seery (Jims son) was a member of the famousPipes Quartet - it was a real pleasure for me to meet him and hear him playingat Tionl Leo Rowsome in An Cultiirlann in September, 1995. Among theClubs regular attendees were the Potts family, John Keenan, Jim Nolan, GerTuohy, Jim Crystal, Criostir and Mairad 0 Cearnaigh, Peter and MaggieFlynn, Liam de Brunir, Jim Dowling, Ciarn OReilly, Mick OConnor, MickHand, Vincent Broderick, Leon Rowsome, Liam Rowsorne, Tom Mulligan,Tom Glackin, Pdraig O Murchii, Sean Haverty, Diarmuid 0 Cathasaigh, TomMcKeon and Paddy McElvaney and their respective families and many more.F
issue Number
3
page Number
6
periodical Author
[Various]
issue Publication Date
2001-01-01T00:00:00
allowedRoles
anonymous,guest,friend,member