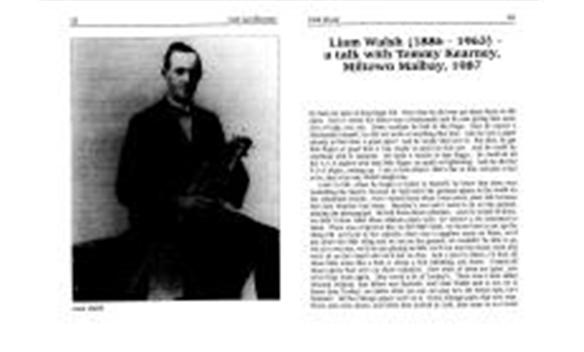 Previous | Next
Ceol na hÉireann / Irish Music, Volume 1, Issue 1, Page 21
5 views
Favourite | Share | Feedback
periodical Publisher
Na Píobairí Uilleann
periodical Editor
Chairman, NPU
periodical Title
Ceol na hÉireann / Irish Music
volume Number
1
issue Content
32Ceol na hEireann Irish Music33Liam Walsh (1886 - 1963) -a talk with Tommy Kearney,Miltown Malbay, 1987He had one joint of that finger left. Now what he did was use these three on thepipes. Now it seems his father was a blacksmith and he was giving him somesort of help, you see. Some accident he had in the forge. Now he wasnt ablacksmith himself, he did not work at anything like that. And he was a piperalready at that time, a great piper! And he nearly died over it. But then, he gotthat finger so good that it was nearly as good as this one. And he could doanything with it, fantastic. He made a muscle in that finger... he could do allthe A-C-A triplets with that little finger, as quick as lightening. And he did theF-G-A triplet, coming up. I am a close player, thats due to him, because I hadto be, thats the way Walsh taught me.Later in life, when he began to listen to himself, he knew that there wassomething the matter, because he had heard the greatest pipers in the world onthe cylindrical records. Now I heard those when I was seven years old, becausethis man Henebry had them. Henebrys son and I used to sit on the ground,playing the phonograph. He had three dozen cylinders. And we would sit there,we didnt know what those uilleann pipes were, we werent a bit interested tothem. There was a big horn like on the HMV label, we knew how to set up thething OK, wed put in the cylinder, there was a sapphire stone on these, wedput down the little thing and we sat on the ground, we wouldnt be able to goout on a wet day, wed be out playing as kids, wed run into the music room andwed sit on the carpet and wed put on this. And I used to listen, Id hear allthose little notes like a bird, it seems a bird whistling, you know. I heard allthose pipers that were on those cylinders. Now most of them are gone, younever hear them again. They saved a lot of Touheys. There was a man calledBernard Delaney, that fellow was fantastic, and Liam Walsh said to me, he isbetter than Touhey, no matter what you say, he said, hes the better man, hesfantastic. All the Chicago pipers were on it. Every Chicago piper that ever was.There were four dozen, and when they arrived in Cork, they came in on a boatLiczm Walsh
issue Number
1
page Number
21
periodical Author
[Various]
issue Publication Date
1993-01-01T00:00:00
allowedRoles
anonymous,guest,friend,member