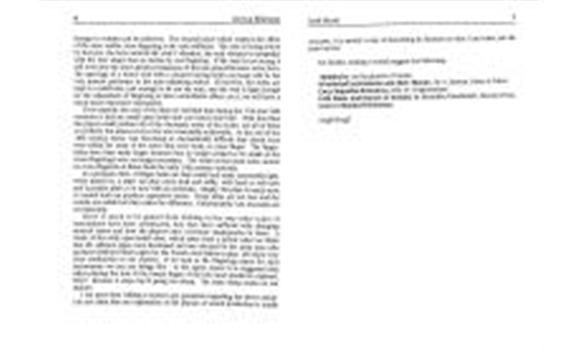 Previous | Next
Ceol na hÉireann / Irish Music, Volume 1, Issue 1, Page 8
5 views
Favourite | Share | Feedback
periodical Publisher
Na Píobairí Uilleann
periodical Editor
Chairman, NPU
periodical Title
Ceol na hÉireann / Irish Music
volume Number
1
issue Content
6Ceol na hEireann Irish Music7change in volume can be achieved. The second factor which restricts the effectof the more subtle cross-fingering is the reed stiffness. The reed is being drivenby the bore, the bore controls the reeds vibration, the reed vibrates in sympathywith the bore shape that we decide by our fingering. If the reed is too strong itwill overcome the more gentle persuasions of the less powerful lower wave form.The marriage of a heavy reed with a chanter having holes too large will be thevery poorest performer in the note-adjusting stakes. If however, the holes arekept to a small size, just enough to let out the tone, and the reed is light enoughfor the adjustment of fingering to have controllable effects on it, we will have amuch more responsive instrument.If we examine the case of the flute we will find that during the 17th and 18thcenturies it had six small open holes and one keyed note hole. With this flutethe player could produce all of the chromatic notes of the scales, not all of themso perfectly but almost every note was reasonably achievable. At the end of the18th century music was becoming so chromatically difficult that closed keyswere added for some of the notes that were tricky to cross finger. The finger-holes were then made larger because they no longer needed to be small as thecross-fingerings were no longer necessary. The result is that most notes cannotbe cross-fingered on flutes from the early 19th century onwards.In conclusion then, if finger-holes are kept small and reeds reasonably light,when played in, a piper can play notes loud and softly, with hard or soft toneand in perfect pitch or in tune with an orchestra. Simply, the piper is much morein control and can produce expressive music. These ideas are not new and theresults are subtle but they make the difference. Unfortunately, lots of people arenot listening!There is much to be gained from looking at the way other types ofinstruments have been constructed, how they have suffered with changingmusical tastes and how the players have overcome inadequacies in them. Astudy of the early open-holed oboe, which dates from a period when we thinkthat the uilleann pipes were developed and was devised by the same man whoproduced bellows-blown pipes for the French court ladies to play, will show veryclose similarities to our chanter. If we look at the fingering charts for suchinstruments we can see things like - in the upper octave it is suggested thatwhen playing the note B the lowest finger of the left hand should be replaced.Why? Because it stops top B going too sharp. The same thing works on ourchanter.I am more than willing to answer any questions regarding the above article.I do not claim that my explanation of the physics of sound production is totallyaccurate, it is merely a way of describing its function so that I can better put thepoint across.For further reading I would suggest the following:-Helmholtz on the physics of music.Woodwind Instruments and their History, by A. Baines, Faber & Faber.Encyclopaedia Brittanica; refer to Temperament.Folk Music and Dances of Ireland, by Breandn Breathnach, Mercier Press.Groves Musical Dictionary.Geoff Wooff
issue Number
1
page Number
8
periodical Author
[Various]
issue Publication Date
1993-01-01T00:00:00
allowedRoles
anonymous,guest,friend,member