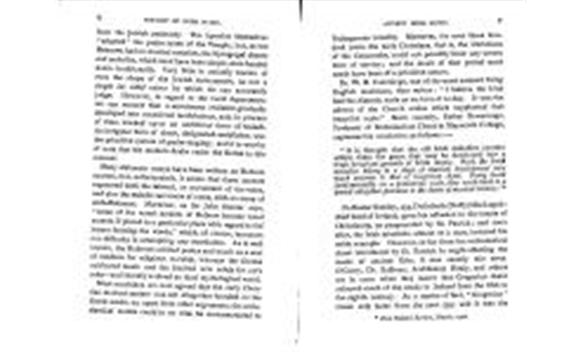 Previous | Next
Grattan Flood - A History of Irish Music, Volume 1, Issue 1, Page 11
1 views
Favourite | Share | Feedback
periodical Publisher
Browne and Nolan Ltd, Dublin 1913
periodical Editor
[none]
periodical Title
Grattan Flood - A History of Irish Music
volume Number
1
issue Content
6HISTORY OF IRISH Musr ,ANCIENT IRISH MUSIC. 7from the Jewish psalmody. The Apostles themselvesadapted the psalm tunes of the Temple, but, as theHebrews had no musical notation, the Synagogal chantsand melodies, which must have been simple, were handeddown traditionally. Very little is actually known ofeven the shape of the Jewish instruments, as not asingle bas relie/ exists by which we can accuratelyjudge. However, in regard to the vocal department,we can assume that a monotonous recitative graduallydeveloped into occasional modulations, and, in processof time, worked up to an ambitious form of roulade.An irregular form of chant, designated cantillaijon, wasthe primitive system of psalm-singing; and it is worthyof note that the modern Arabs recite the I oran in thismanner.Many elaborate essays have been written on Hebrewaccents, but, unfortunately, it seems that these accentsexpressed both the interval, or movement of the voice,and also the melodic successjofl of notes, with an array ofembellishment. Moreover, as Sir John Stainer says,some of the vowel accents of Hebrew became tonalaccents if placed in a particular place with regard to theletters forming. the words, which, of course, increasesour difficulty in attempting any translation. As is wellknown, the Hebrews utilized poetry and music as a sortof medium for religious worship, whereas the Greekscultivated music and the kindred arts solely for artssake_-and thereby evolved an ideal mythological world.Most musicians are now agreed that the early Chris.tian musical system was not altogether founded on theGreek modes, as, apart from other arguments, the eccle-siastical modes could in no wise be accommodated tPythagorean tonality. Moreover, for over three hun-dred years, the early Christians, that is, the Christiansof the Catacombs, could not possibly have any ornateform of service; and the music of that period mustneeds have been of a primitive nature.Dr. W. H. Cummings, one of the most eminent livingEnglish musicians, thus writes: I believe the Irishhad the diatonic scale a we have it to-day. It was theadvent of the Church scales which supplanted thatbeautiful scale. More recently, Father Bewerunge,Professor of Ecclesiastical Chant in Maynooth College,expresses his conviction as follows :It is thought that the old Irish melodies containwithin them the germ that may be developed into afresh luxuriant growth of Irish music. Now, the Irishmelodies belong to a stage of musical development verymuch anterior to that of Gregorian chant. Being basedfundamentally on a pentaton.ic scale, they reach back to aperiod altogether previous to the dawn 01 musical history.*On Easter Sunday, 433, Duththach (Duffy) MacLugair chief bard of Ireland, gave his adhesion to the tenets ofChristianity, as propounded by St. Patrick; and soonafter, the Irish minstrels, almost to a man, imitated hisnoble example. However, so far from the ecclesiasticalchant introduced by St. Patrick in aught affecting themusic of ancient Erin, it was exactly vice versa.OCurry, Dr. Sullivan, Archbishop Healy, and othersare in error when they assert that Gregorian chantcoloured much of the music in Ireland from the fifth tothe eighth century. As a matter of fact, Gregorianmusic only dates from the year 593; and it was the* New Ireland Revkw, March, x oo)
issue Number
1
page Number
11
periodical Author
Grattan Flood, Wm. H.
issue Publication Date
1913-01-01T00:00:00
allowedRoles
anonymous,guest,friend,member