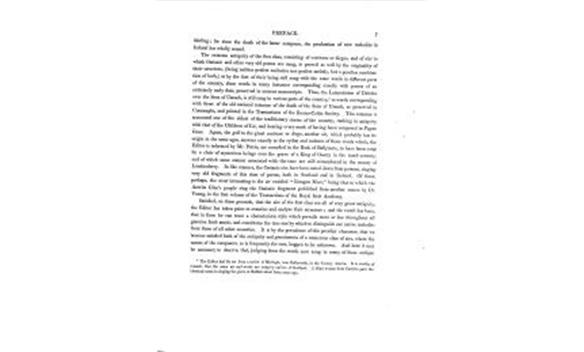 Previous | Next
Bunting - The Ancient Music of Ireland, Volume 1, Issue 1, Page 13
34 views
Favourite | Share | Feedback
periodical Publisher
Hodges & Smith, Dublin, 1840
periodical Editor
Edward Bunting
periodical Title
Bunting - The Ancient Music of Ireland
volume Number
1
issue Content
PREFACE. 7Stirling; for since the death of the latter composer, the production of new melodies inIreland has wholly ceased.The extreme antiquity of the first class, consisting of caoinans or dirges, and of airs towhich Ossianic and other very old poems are sung, is proved as well by the originality oftheir structure, (being neither perfect recitative nor perfect melody, but a peculiar combina-tion of both,) as by the fact of their being still sung with the same words in different partsof the country, these words in many instances corresponding exactly with poems of auextremely early date, preserved in ancient manuscripts. Thus, the Lamentation of Deirdreover the Sons of Usnach, is still sung in various parts of the country,a to words correspondingwith those of the old national romance of the death of the Sons of Usnach, as preserved inConnaught, and printed in the Transactions of the Iberno-Celtic Society. This romance isaccounted one of the oldest of the traditionary stories of the country, ranking in antiquitywith that of the Children of Lir, and bearing every mark of having been composed in Pagantimes. Again, the goll to the great caoinan or dirge, another air, which probal)ly has itsorigin in the same ages, answers exactly to the rythm and cadence of those words which, theEditor is informed by Mr. Petrie, are recorded in the Book of Ballymote, to have been suingby a choir of mysterious beings over the grave of a King of Ossory iii the tenth century,and of which some stanzas associated with the tune are still remembered iii the county ofLondonderry. In like manner, the Ossianic airs have been noted down from persons, singingvery old fragments of this class of poems, both in Scotland and in Ireland. Of these,perhaps, the most interesting is the air entitled Erragon More, being that to which theAntrim Glens people sing the Ossiaiiic fragment published from another source by Dr.Young, in the first volume of the Transactions of the Royal Irish Academy.Satisfied, on these grounds, that the airs of the first class are all of very great antiquity,the Editor has taken pains to examine and analyze their structure ; and the result has been,that in them he can trace a characteristic style which prevails more or less throughout allgenuine Irish music, and constitutes the true test by which to distinguish our native melodiesfrom those of all other countries. It is by the prevalence of this peculiar character, that webecome satisfied both of the auitiquity and genuineness of a numerous class of airs, where thenames of the composers, as is frequently tl1e case, happen to be unknown. And here it maybe necessary to observe, that, judging from the words now sung to many of these antiquea The Editor had his set from a native of Murlogli, near Ballycastle, in the County Antrin,. It is worthy ofremark, that the same air and words are sung by natives of Scotland. A blind woman from Cantyre gave theidentical notes iii singing the piece at Belfast about forty years ago.
issue Number
1
page Number
13
periodical Author
Edward Bunting
issue Publication Date
1840-01-01T00:00:00
allowedRoles
anonymous,guest,friend,member